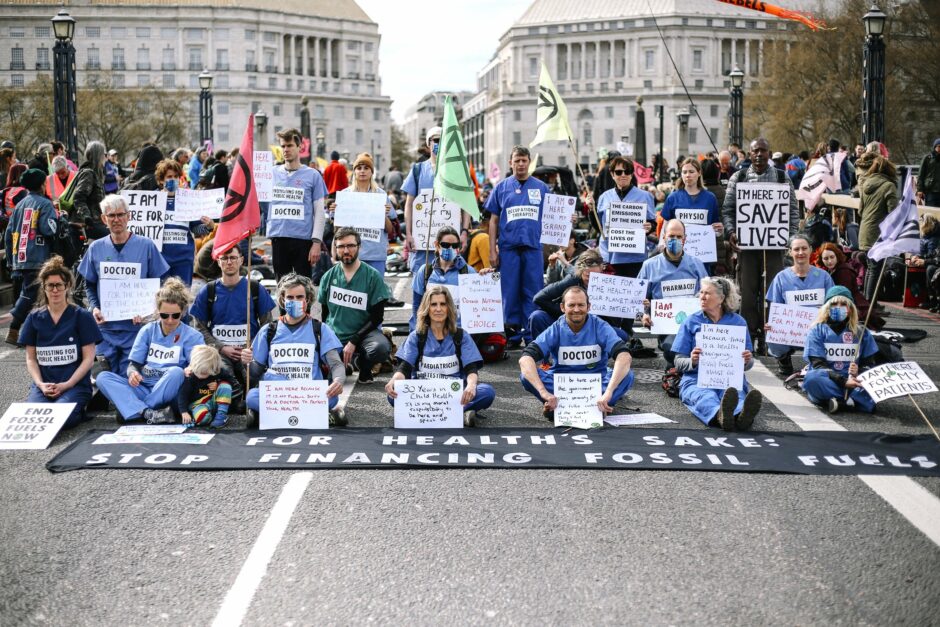 Seven health professionals have been acquitted at City of London Magistrates’ Court today. Dr David McKelvey, Dr Chris Newman, Dr Mark Russell and Dr Patrick Hart – all GPs, Dr Alice Clack – a hospital consultant obstetrician, Rosie Jones – a clinical psychologist and Anna Bunten – a specialist nurse, faced a charge of ‘breach of section 14’ of the public order act. Judge Robinson, who presided over the case, was not convinced that the necessary steps that are required for the imposition of section 14 had been taken.

Judge Robinson remarked on acquittal “I was impressed by the integrity and rationality of their beliefs” and “their evidence was highly moving.”

They are part of a group of approximately thirty health professionals who blocked Lambeth bridge in the late afternoon of Sunday 10th April, including former Editor in Chief of the British Medical Journal, Dr Fiona Godlee. They displayed a banner saying ‘For Health’s Sake. Stop Financing Fossil Fuels’, to highlight the estimated £10 billion in annual  financial support the government gives to the fossil fuel industry, according to the OECD. [1]

The group were present at an earlier blockade by Extinction Rebellion, which had taken place from 2pm to 4:30pm. Most protesters left by 4.30pm but the health professionals elected to block the bridge to make their own protest. [2] Thirty minutes later, shortly after 5pm, they were arrested.

This followed an earlier protest on World Health Day, the 7th April, when the group blocked the road outside HM Treasury, while delivering a letter requesting ‘the removal of UK financial support for fossil fuels’. The Treasury made no immediate response but replied to the letter in May. [3]

Jenny Winter, a solicitor acting on behalf of Dr David McKelvey, said: “The right to peaceful protest is a cornerstone of any properly functioning democracy so that a government found wanting in protecting public interest or health is called to account. These health professionals have been exonerated of wrongdoing after raising the alarm about urgent, major, public health issues.”

Dr Fiona Godlee, Ambassador of the UK Health Alliance on Climate Change and former Editor in Chief of the British Medical Journal, said: “I was a part of the protest on Lambeth Bridge and these doctors and health professionals have my full support. They have acted at all times with enormous professionalism, courage and integrity. Their protest is in a long tradition of non-violent civil disobedience for causes that seek to improve social justice and, in the case of climate protest, to secure a liveable future for all.

“By acting as they have done, they are fulfilling their duty of care to their patients and the public, alerting us all to the real and present dangers of the climate crisis and calling on our political leaders to act now to avoid climate catastrophe.”

Defendant Dr Chris Newman, a GP, said: “Medical institutions have been printing ever more concerned articles about the risks of climate change to health in the past couple of years, but it has not been enough. Protest, like this one, is like attempting to shock a failing heart, in the hope it will change its rhythm.  The Lancet said recently “There is some evidence that disruptive or radical non-violent actions…are successful at garnering public attention for a cause. Thankfully today, the court recognised that right to protest “

Dr Patrick Hart, a GP, said: “I’m trying to make a point. It’s not about our morning coffee being too milky, it’s about the deaths of millions, the loss of everything we care about, in particular the loss of law and order. The level of disruption we caused was proportionate to the problems we face. I don’t want to be arrested, but I accept it as a consequence. I’m heavily invested in the rule of law, and I do this to protect the rule of law, 18 King’s Counsellors have said that we face the collapse of the rule of law.”

Anna Bunten, an Advanced Nurse Practitioner, said: “The Lancet, a top medical journal, said just this year ‘A persistent fossil fuel addiction is amplifying the health impacts of climate change, and compounding the concurrent energy, cost-of-living, food, and COVID-19 crises we face.’ We believe that this protest will help to wake us all up to this inconvenient truth and the need for society-wide change to get us off fossil fuels – our future health depends on it.”

Defendant Dr Alice Clack, a Consultant Obstetrician, said: “As an Obstetrician it’s becoming ever more clear that climate change will impact the life of every child I deliver. UN Secretary General Antonio Guterres recently said ‘We have a rapidly closing window of opportunity to create a livable future’, and yet our government continues to invest in new fossil fuels we cannot safely burn.  As a health practitioner, an aunt, and a member of society, I have a responsibility to speak out and demand both an end to this destructive policy, and an appropriate commitment to the urgent action we need to protect our children.”