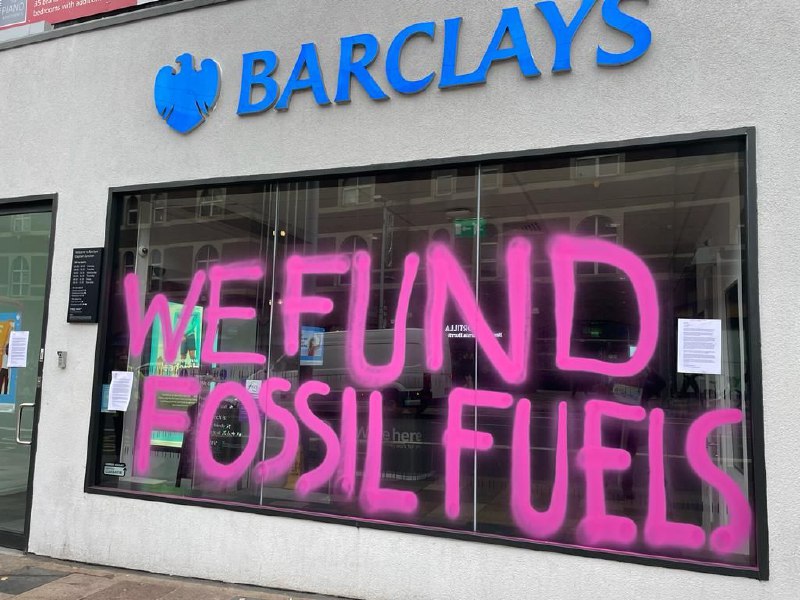 On Monday November 14 Barclays faced the biggest ever day of climate protests as  hundreds of people took action at over 100 Barclays branches across the UK to protest against the high street bank’s investment in fossil fuels.

Protesters from Extinction Rebellion groups in Scotland, Wales, Northern Ireland and England occupied and flyposted branches, painted buildings with red paint and fake oil and held die-ins and street theatre performances, with actions set to continue throughout the day.

Barclays is the UK’s and Europe’s largest financier of fossil fuels. [1] Since 2021, when the International Energy Agency concluded there could be no new oil, gas or coal development if the world was to reach net zero by 2050, Barclays has invested $19.583B in fossil fuels. [2] Since the Paris Climate Agreement in 2016 their total investment in fossil fuels is  $144.897B.

In the early hours of Monday morning, Extinction Rebellion London flyposted 45 Barclays branches across the capital with posters bearing the Barclays logo and reading ‘this is an intervention’ and ‘banking on climate chaos’. In Birmingham protesters threw washable fake oil over the High Street branch of Barclays and spray painted ‘Europe’s biggest fossil fuel funder’ on the facade of the building. At 8am in Glasgow two people carefully cracked the windows of the Barclays branch in their new offices at Clyde Place Quay, following the action they remained in front of the bank to be held accountable for their actions, holding banners reading ‘this is an intervention’ and ‘stop funding Rosebank’. [3]

Extinction Rebellion co-founder Gail Bradbrook, said: “Today hundreds of people staged an intervention on Barclays, sending a message to the high street bank that with protests taking place at over 100 of their branches they are rapidly losing the social licence to do business in towns and cities of the UK.

“It’s high time that Barclays recognised the destructive role they are playing as Europe’s largest financier of fossil fuels and changed course.”

“We want Barclays to stop funding nature destroying projects and more than that we want them to show leadership. We ask them to publicly denounce an economic system that is geared towards the destruction of the planet, we want them to admit in public what bankers tell us in private – that they aren’t changing fast enough because the current system incentivises harmful behaviour.”

Just this week the UN Secretary General, António Guterres, warned, “We are on a highway to climate hell with our foot still on the accelerator.” [4] This summer the UK recorded its hottest ever temperature, and there were three times the usual number of wildfires. [5] [6] Drought conditions across the nation are set to continue into 2023. [7] In a departure from the traditionally more neutral stance adopted by the UN, in April Guterres indicated for the first time those he considers responsible for the worsening climate saying, “some government and business leaders are saying one thing – but doing another. Simply put, they are lying.” [8]

Extinction Rebellion, along with other groups, are calling for Barclays to end all investment in fossil fuel expansion. In March 2020 Greenpeace activists shut down nearly 100 Barclays branches in protest against the bank’s continued multi-billion dollar support for fossil fuels. [9]

Alongside the protest actions, people from Extinction Rebellion local groups were out on the streets raising awareness about Barclays and encouraging people who use the bank to consider switching – other high street banks produce six times less emissions per pound in a current account than Barclays. [10]

The day of protests follows Barclays’ announcement of much higher than expected pre-tax profits for the quarter of nearly £2bn. [11] Higher interest rates have helped increase Barclays profits, whilst the cost of living has soared.

Please credit the photographer if one is named in the image file.