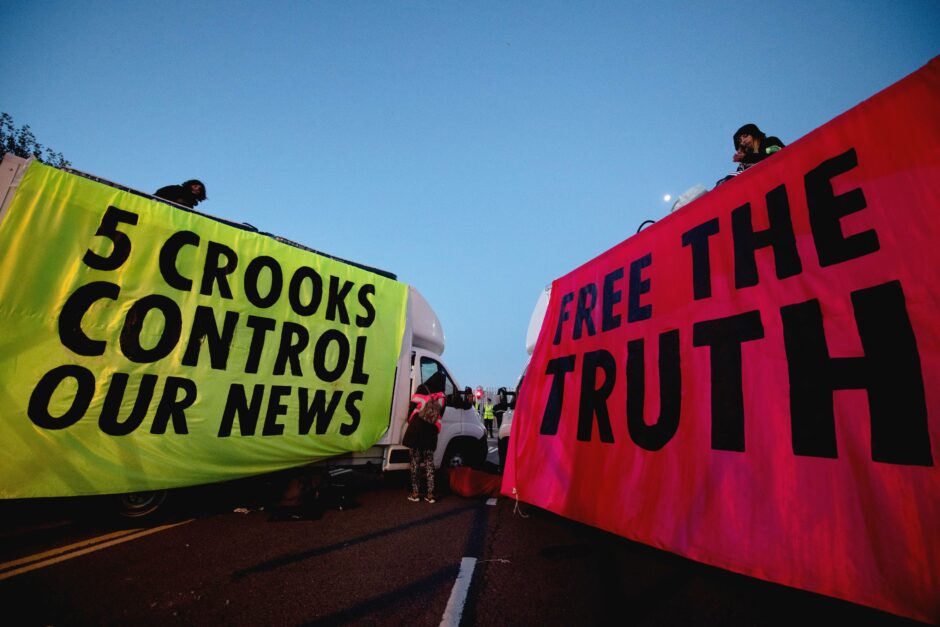 A week in the press-policing quagmire

What led us to this point where police arrest the press, and what was the press’ part in it?

The arrest of several journalists this week sparked concern for press freedom. The public and the press are experiencing increasing repression at the hands of the police and the state. Simultaneously the right wing think tanks and the papers are pressuring the police and the state for harsher crackdowns on protesters, working directly with the police as they did in the preemptive raids on the houses of the Just Stop Oil supporters this week. The speed at which communication is happening between certain elements of the press and the state is enough to give the exorcist head spin a run for its money!

This week journalists, photographers, and filmmakers were arrested during Just Stop Oil protests. Although police have now in at least one of the cases admitted the arrest was a mistake, these clearly weren’t errors made in the heat of the moment. One photographer was held for hours while his house was raided by police officers. [1]

The only question police asked before journalist Charlotte Lynch was held in a police cell for 7 hours was how she knew to be there. [2] Why, then, were The Sun not only not arrested for being aware of the protest, but instead invited to an investigation, i.e.the front door, of someone not charged but simply suspected of nonviolent protest? One might question (again) whether there is favouritism from the police towards certain sections of the media?

Herts Police’s statement says: “Our officers…have been instructed to act as quickly as they can”. [3] These arrests happened hours after preemptive raids on known public figures in the Just Stop Oil campaign and days after a right wing think tank urged police to act quickly in response to Just Stop Oil. The raids took place in the presence of Sun journalists and photographers because the paper “infiltrated a meeting”, “passed on recordings to the police” and were then “invited to join the Met’s territorial support group as officers smashed through Hallam’s front door.” [4] Just as an fyi, open calls are exactly that, open to anyone – including any and all journalists. Infiltration is an odd way to describe a process that is transparent.

So a nonviolent campaigner had his door smashed in for speaking on a Zoom call with Sun journalists present, even though he wasn’t home. It’s worth noting that the police monitor him fairly closely. Not only was this overreach by the police – they can easily find Hallam given he’s been under state monitoring multiple times – this was overreach in their collaboration with a right wing newspaper. The Met gave journalists access to Hallam, his partner, and details of their accommodation, which they knew would then be shared publicly by the Sun to fuel sensationalist content for the paper, content that risks personal attacks on Hallam’s home, as well as other protesters they profiled.

The raids and arrests on Sunday ended with people held on remand over a Zoom call, taking the total to 16 Just Stop Oil supporters on remand or serving sentences in prison during the COP27 climate talks. [5]

But what happened the day before the raid? Policy Exchange, an extreme right think tank with a history of climate denial and funding from fossil fuel giant Exxon, released a report claiming the PCSC Bill, which is now law, and the Public Order Bill, which is being pushed through Parliament at the moment, don’t go far enough. [6] As well as calling for harsher sentencing, the report calls three times for the police to act more quickly:

“Police have a good argument to make that they must move quickly to arrest protesters who obstruct the roads in part because delay in making arrests will increase the likelihood that a breach of the peace might otherwise arise.”

The report was covered by The Telegraph in an article that opened with “police are doing far too little”, as well as The Times which described nonviolent protesters as aggressive. The Sun and other papers also covered the release of the report at the weekend. [7]

It is worth noting here that this is the same Policy Exchange who commissioned disgraced former Head of Counter Terrorism, Richard Walton, to write a report on Extinction Rebellion in July 2019 titled ‘Extremism Rebellion’. Walton left the Met before he could be held to account for the infiltration of groups supporting the family of murdered teenager Stephen Lawrence. [8] The PCSC Act and now the Public Order Bill carry forward recommendations for changes to the law which originated in that report. [9]

The Met’s preemptive raids and Herts Police instructing officers to act “as quickly as they can” took place to backdrop of the Policy Exchange report and almost daily Speeches from the Home Secretary labeling nonviolent protesters “extremists using guerilla tactics”. [10]

Back in 2020, LBC called for harsher policing, sentencing, and even raids on protesters. [10] So how has this media landscape contributed to the police’s quick handed, preemptive, and overreaching use of powers? Perhaps it has now even played a part in the arrest of their own journalists?

Going back further, the mainstream media have repeatedly attacked the police for failing to arrest (often in cases where protesters actually have been arrested), failing to act quickly (often in cases where people have been arrested and later released without charge), and called for harsher sentencing for nonviolent protest. The news media have also repeatedly shared clips of members of the public driving into, moving, or attacking protesters. [11] This is particularly true of Talk TV/Radio, which is owned by the same group as The Sun newspaper. These clips not only insight violence against peaceful protest but also often come with the accusation that the police “aren’t doing their job”.

It is worth noting that alongside the push for harsher sentencing coming from fossil fuel funded think tanks, connections to the carbon economy also abound in the mainstream media and the Government. [12] [13] Deepening the quagmire of vested interests there are also apparent connections between government and media, with former Home Secretary Priti Patel attending the wedding of media mogul and member of Genie Energy board, Rupert Murdoch. [14]

The Government are also trying to increase sentences for journalists at this time via proposed changes to the official secrets act. This could result in up to 14 year prison sentences for stories that embarrass the Government. [15]

We are witnessing the erasure of democracy. An open letter signed by 400 climate scientists last year stated:

“It has become abundantly clear that governments don’t act on climate without pressure from civil society: threatening and silencing activists thus seems to be a new form of anti-democratic refusal to act on climate”

We could upgrade our democracy through a citizens assembly – which allows decisions to be reached free from corruption with people not politicians at the centre of the process. Instead we have think tanks and media funded by fossil fuels driving changes to the law. But we refuse to be silenced. We will continue to stand up for care and freedom for all.

If you’re a journalist and the unfolding crises we are all bearing witness to have hit home recently, you’re not alone. Pick up a phone – call us.