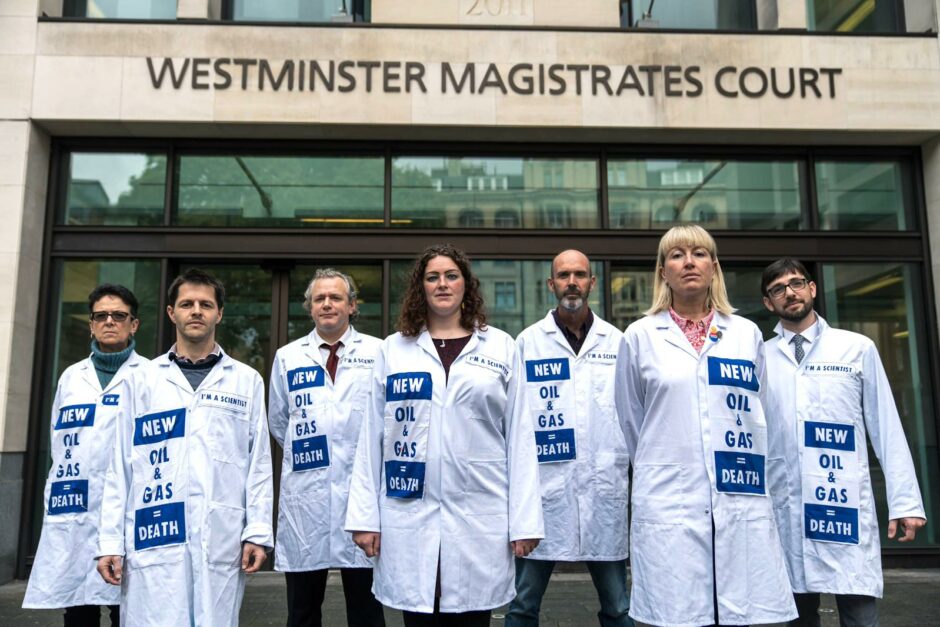 In a striking legal judgement, five members of Scientists for Extinction Rebellion on trial for committing £2000’s worth of criminal damage to the Department for Business, Energy and Industrial Strategy (BEIS) last April were acquitted by a London Magistrates’ court.

Scientists exercising their rights under the Human Rights Act
The magistrates ruled that the conviction should be in proportion to the damage committed. Since the scientists had used washable and removable substances, the magistrates ruled there was no case to answer. In addition, they ruled that the scientists were exercising their rights to protest under the Human Rights Act.

After the ruling, Dr Caroline Vincent said: “The government would rather prosecute scientists and suppress legitimate protests than to act on the advice they receive from scientists and their own advisors. But today, the magistrates acknowledged that we were expressing our right to protest, which should be the cornerstone of any democracy.”

Dr Abi Perrin, another of the scientists said: “In April I watched the UN Secretary General stating that our current energy policies put us on a “fast track towards an unlivable world”. Days later the UK government released its energy strategy announcing measures that accelerate climate and environmental breakdown.

In a judgement which demonstrates the arbitrariness of the legal system, and the role that judges can play in undermining climate protests, the four other scientists who took part in the action at BEIS were separately tried in September by a district judge and found guilty.

They were charged with more than £25,000 worth of criminal damage after a protest at Shell that lasted for more than 24 hours. Activists poured fake oil, glued themselves to the windows and blocked doors. They cracked several windows, climbed onto the entrance canopy, dropped banners and painted the outside of the building with the words: ‘Shell Knew’, ‘Climate Criminals’ and ‘Lies’.

Dr Elanor Lewis-Holmes who took part in the action, said: “I am glad our attempts to inform Shell employees of the danger that their employer poses to our collective future…have resulted in all criminal charges against us being dropped. Shell has been found guilty of numerous climate related crimes such as destructive oil spills in the Niger Delta and highly inadequate reductions in CO2 emissions.”

So far in 2022 Shell has made record global profits of nearly £26bn but has paid zero windfall tax in the UK, while millions of people in the UK cannot afford to heat their homes because of record rises in gas and oil prices. Shell said it did not expect to pay this tax during 2022, because these profits were offset by spending on North Sea oil drilling.

UN Report issues severe warning about climate change
Last week the UN Environment Programme (UNEP) issued a report: “As it stands today, latest data indicates that the world is on track for a temperature rise of between 2.4C and 2.6C by the end of this century.

Antonio Guterres, UN Secretary General, said: “As the latest UNEP Emissions Gap report makes clear, we are headed for economy-destroying levels of global heating. We need Climate Action on all fronts – and we need it now. We must close the emissions gaps before catastrophe closes in on us all.”

The time for action against climate change is now.