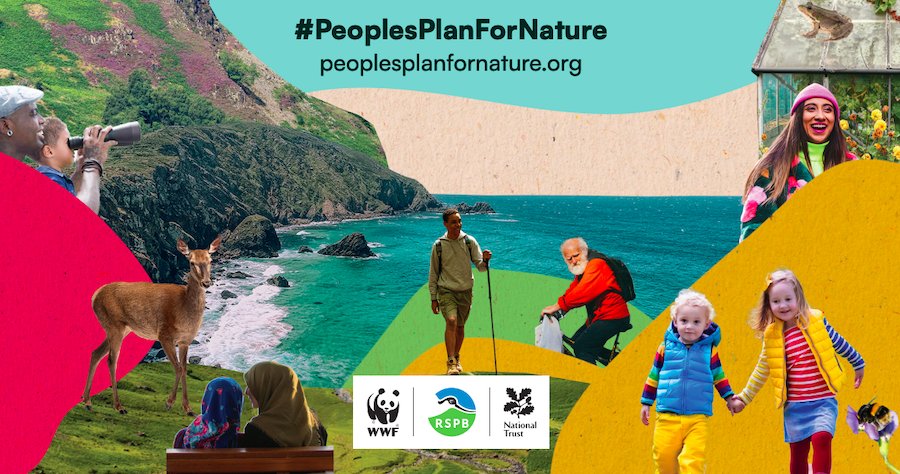 Trust the wild card? Initial thoughts on the People’s Assembly for Nature 

The WWF, Royal Society for the Protections of Birds (RSPB) and the National Trust are jointly commissioning a citizens’ assembly to come up with a People’s Plan For Nature. In their own words, this alliance of some of the UK’s largest nature conservation charities will be collaborating with the public to protect and restore nature in the UK.

The more the idea of citizens’ assemblies (CAs) are in the limelight, the more the public will become aware of how people can actively be involved in the decision making that affect their lives.

What we know so far is that it is to be run by Involve and the Sortition Foundation, both now experienced practitioners having been part of Scotland’s Climate Assembly, Climate Assembly UK and many others. Other partners are 89Up and the New Citizens Project.

It’s happening over four weekends: two in person in Birmingham and two weekends online between November 2022 and February 2023.

The knowledge and understanding about CAs will reach a wide range of the general public due to the extensive membership of these groups, people that XR might find hard to reach.

The process has been designed with three different stages, each stage helping to extend the conversation on the nature crisis we are in.

It’s an interesting model that seeks to include input from as many people from as wide a range as possible. This model of holding community conversations or assemblies and feeding into a citizens’ assembly has already been used at the Global Assembly and is being used for Poland’s forthcoming citizens’ assembly on fuel poverty.

The expectation is that when the People’s Plan for Nature is published, it will be too big to ignore and will have the support of a large swathe of the nature-aware population.

As if there wasn’t enough confusion already, the decision was made to have a citizens’ assembly which they called a people’s assembly. To clarify: the People’s Assembly for Nature is in fact a citizens’ assembly. Though both are deliberative and participatory processes, they are fundamentally quite different. See ‘How Do Citizens’ Assemblies Differ From People’s Assemblies’.

The process of a citizens’ assembly should always be completely transparent. For now, details are a bit sparse on the ground especially since this project must have been in the making for a while and is starting in less than a month. A few things we are curious to know are:

We look forward to more details and hope the minimum standards we measure citizens’ assemblies by are followed. We will of course keep you posted!

What can you do?

This is a great opportunity to get much needed attention for both the nature crisis and the need for more deliberative democracy, such as citizens’ assemblies. Here are some ways you can help:

If you have any questions about citizens’ assemblies, please reach out to your friendly Citizens’ Assembly Working Group (CAWG) on xr-CitizensAssembly@protonmail.com, check out our citizens’ assembly page and Frequently asked Questions, and: come find us in the citizens’ assembly gazebo at the Tate Modern on Saturday 15 October for the Festival of Resistance where you can ask your questions in real life!