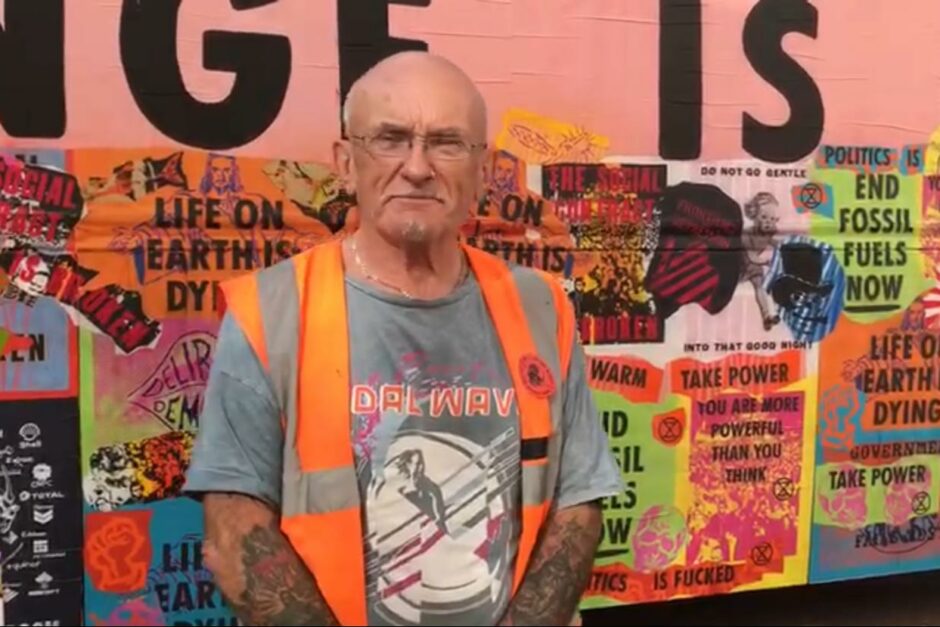 Change is Now Tour – Interview with Ashley Watson from Taunton

The Change is Now tour arrived at Taunton, where it linked up with Ashley Watson, who explains why he’s supporting Extinction Rebellion.

“I’m very concerned about people’s and government apathy about the environment”, says Ashley Watson in conversation with Ann-Marie Evans.

Have you come down specifically to see the ‘Change is Now’ bus today?

I was walking through the town and heard the Samba Band and realised there was something interesting and important going on. I followed the sound and saw the bus coming down, so I looked around and held one of the banners. I felt comfortable with people here, because it rekindles things I left behind when I came to Taunton about 20 odd years ago.

How do you feel about the environmental and ecological crisis?

I’m very concerned about the environment and apathy about it among people in general, and the government in particular. Everybody puts it on the table at International conferences, but afterwards it just gets put on one side, because other issues are more important like the cost of living. It’s really important for groups like this to stand up and do their stuff, and keep things in people’s faces, so people are still asking questions, especially kids.

Do you have children and grandchildren yourself?

I’ve got three daughters. One of them is a very predominant activist within BLM and XR in Taunton. She’s a bit upset as she can’t get in today. And I’ve got grandchildren and lots of friends who talk about this stuff.

So you can see the connection between social justice and racial inequalities and the climate crisis?

Gender inequality, racial inequality, and all other sorts of inequalities, and a system that has been predominantly geared towards educating people and not actually listening to people on the ground. There are people at the bottom of the heap who have a very valid opinion.