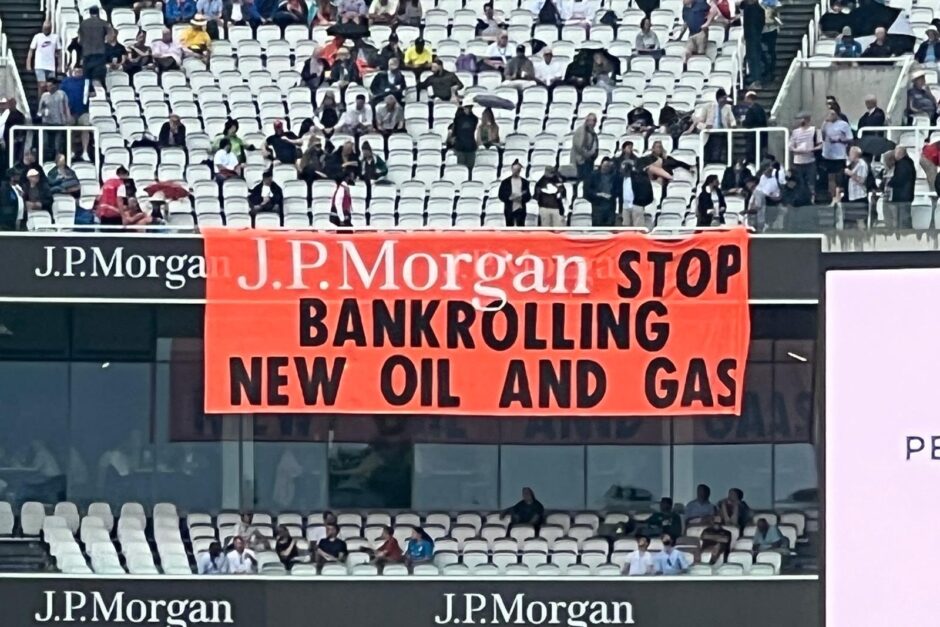 At 2:30 pm on Wednesday August 17th two doctors unfurled a huge banner at Lords Cricket ground, during the first day of the Test Match between England and South Africa, reading ‘JP Morgan: Stop Bankrolling New Oil and Gas’. The banner drop was the 5th major protest in the last 12 months by Doctors for Extinction Rebellion against JP Morgan Chase – the biggest financier of fossil fuels in the world, and the principal sponsor of Lord’s cricket ground. [1]

The group sent a letter to the current president of Lord’s (Marylebone Cricket Club) Clare Connor, and incoming president Stephen Fry, in which they said “The health impacts of the continued use of fossil fuels and the failure to immediately stop all new fossil fuel investments is clear and unequivocal. Sadly it is countries in the global south, many of whom are cricketing nations, that continue to bear the burden of the devastating effects of climate change. And cricket itself is the most vulnerable sport. Before his death, cricketing legend Shane Warne said, regarding the 2019 ‘Hit for Six’ report on climate and cricket “People want to put their head in the sand, and say I’m not going to be around in 50 years. That’s just wrong.” [2]

Dr Chris Newman, a GP, who was one of the two protesting at Lords, and who was involved in disrupting JP Morgan’s ‘Corporate Challenge’ in London on July 6th, said: “We have entered the era of 40 degree summers in the UK, and JP Morgan are complicit in both causing and worsening this situation. It is ironic that the CEO of Lords has spoken about nurturing the game for the next generation, whilst at the same time choosing a sponsor who seems hell bent on destroying it.”

JP Morgan has poured $384.2 billion into the fossil fuel industry since the Paris Climate Agreement in 2016. In 2021 alone they invested $15.8 billion into new fossil fuel developments, the same year the International Energy Agency said that investment in new oil, gas or coal projects must end if the world is to reach net zero by 2050. [4]

Dr Alice Clack, who was the second doctor involved in the banner drop today, who was arrested alongside five other health professionals last month for breaking glass at JP Morgan’s Canary Wharf HQ, said: “I am a Consultant Obstetrician and Gynaecologist. I have worked extensively in Africa training midwives and doctors, delivering emergency care, and improving maternity services. In the face of the climate and ecological emergency this work has become futile and dishonest, as it is now clear that unless we tackle the causes of these crises, the vulnerable across our planet, my patients, will suffer first and most.” [5]

Doctors for Extinction Rebellion considers this protest, given the catastrophic impact the climate crisis will have on health, as in keeping with guidance from the Government’s Office for Health Improvement and Disparities published in May this year “Health and care professionals should recognise the climate crisis as a health crisis, and therefore climate action as a core part of their professional responsibilities.”  [6]

Dr James Hospedales, former Executive Director of the Caribbean Public Health Agency and founder of EarthMedic&EarthNurse, was one of several health professionals outside leafleting cricket fans about the protest. He said:  “The Caribbean nations, many of them members of the Commonwealth, are all uniquely vulnerable to climate change. Our coral reefs account for 15% of GDP and 13% of jobs, and they seem destined to be practically extinct within a few decades due, in no small part, to the negligent investments from JP Morgan.”

Last month JP Morgan were also publicly criticised by Champions for Earth, run by two British Olympians, for ‘sportswashing’ the Commonwealth games, whilst 147 health professionals wrote a letter to the Chair of the Commonwealth Games Board of Directors, urging them to ‘sever all partnership with JP Morgan Chase.’ [7] [8]

[3] No new oil, gas or coal development if world is to reach net zero by 2050, says world energy body: https://www.theguardian.com/environment/2021/may/18/no-new-investment-in-fossil-fuels-demands-top-energy-economist

[6] Government guidance for health professionals: Climate and health: applying “All Our Health” 18th May 2022