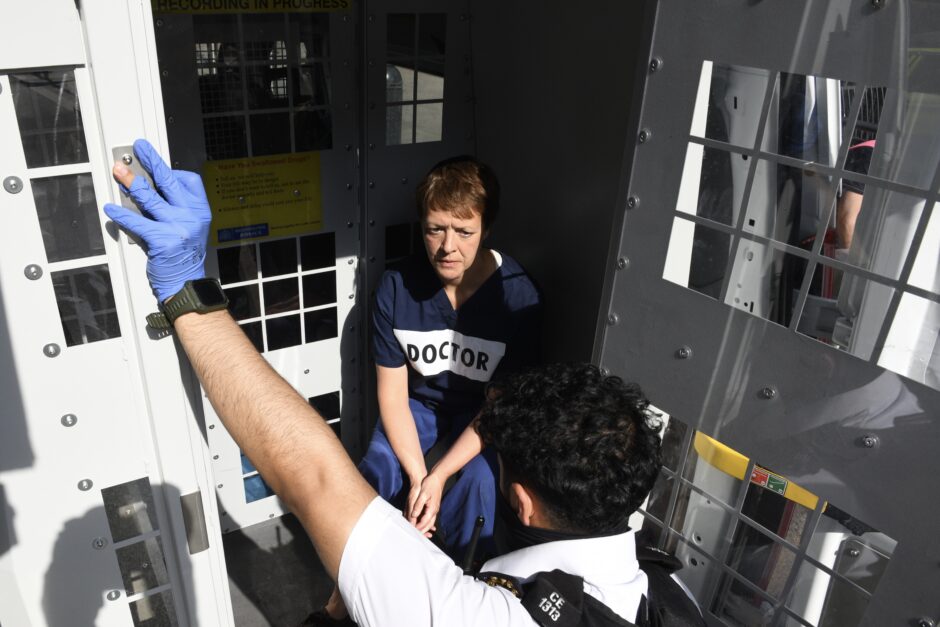 At around 10pm last night six healthcare professionals were released under investigation from Fresh Wharf Custody Base in Barking where they had been held since Sunday morning. The group from Doctors for XR included two GPs, a child and adolescent mental health specialist, a gynecologist, a consultant psychiatrist and a dementia nurse. They were held in police custody after carefully cracking eight panes of glass at financial services giant and investment bank JP Morgan’s offices in Canary Wharf at 8 am on Sunday July 17th.

The medics placed stickers on the windows reading ‘in case of medical climate emergency break glass’ before carefully cracking the panes of glass near the entrance to the building. Special care was taken to ensure the safety of any staff and passersby present during the action. All six health professionals were arrested by police shortly after the action.

The act of nonviolent civil disobedience comes in response to the British Government declaring the nation’s first ever level 4 national emergency heat red alert this week, ahead of predicted temperatures of 40 degrees celsius today.

A study published by the Met Office in May this year found that climate change is making heatwaves hotter and more frequent. [1] Weather maps of the incoming heatwave are showing temperatures similar to recent Met Office predictions for 2050, the year of the UK Government’s net zero target. [2]

According to guidance from the Government’s Office for Health Improvement and Disparities published in May this year “Health and care professionals should recognise the climate crisis as a health crisis, and therefore climate action as a core part of their professional responsibilities.” [3]

Dr Fiona Godlee, the former Editor in Chief of the British Medical Journal, said: “We should all be very worried about the state of our democracy when GPs and nurses are willing to risk going to prison to protect public health. Successive governments, the fossil fuel industry and the banks that fund it have allowed the climate crisis to become a global health crisis.

“People in the UK will lose their lives today as a result of extreme heat, and these heatwaves will only become more frequent and more intense unless emissions are radically reduced. It’s time to stop the flow of money to the fossil fuel industry and JP Morgan holds the largest burden of responsibility for beginning to right this enormous wrong.”

JP Morgan is the world’s biggest funder of fossil fuels, having poured $384.2 billion into the sector since the Paris Climate Agreement in 2016. The financial services giant and investment bank funded the fossil fuel industry to the tune of $61.7 billion in 2021, the same year the International Energy Agency stated that new oil, gas or coal investment must end if the world is to reach net zero by 2050. [4] [5]

Heatwaves are known to pose a variety of health risks, including increased risk of stroke, and heart failure. [6] Periods of extreme heat have also been linked to negative impacts on mental health and increased suicide rates, according to a study published in Nature Climate Change looking at data from the U.S and Mexico. [7] Experts have warned that thousands of people in the UK could die as a result of the coming heatwave, with both the vulnerable as well as the fit and healthy at risk. [8]

In June this year a GP and a medical student were found not guilty tafter spray painting and super gluing themselves outside JP Morgan in Canary Wharf in September 2021 as part of a Doctors for XR action to demand banks stop funding fossil fuels. [9] The Judge in the case, Ross Johnson, commented:

“​​The words written were deliberately quoted from a report on climate change and designed to highlight what they genuinely considered to be the extreme threat posed to humanity and the need to act urgently to avoid catastrophic loss of life. This was a form of political expression of considerable importance. These were not violent actions.”

Explaining his decision to find the two not guilty, he added: “Although their arrest was necessary to bring the offence to an end and allow for the property to be restored to its former state, I am not satisfied so that I am sure that the subsequent prosecution and conviction of the defendants is a necessary interference with their article 10 rights in a democratic society.” [10]

The action comes in the run up to Extinction Rebellion plans to come out onto the streets of London from September 10th.

Quotes from the doctors, medical and health professionals who took part in the action:

Dr Juliette Brown, a Consultant Psychiatrist who took part in the action, said: “This week may see the hottest day in recorded history in the UK, putting my patients – people with dementia and with serious mental illness – at very high risk from heat stress. It’s absolutely my professional duty to sound the alarm just as so many other healthworkers, scientists, activists and leaders are doing. By continuing to profit from fossil fuel interests JP Morgan are knowingly fuelling this climate crisis.”

Maggie Fay, a Dementia Specialist Nurse, who took part in the action, said: “My name is Maggie Fay, I am a Dementia Specialist Nurse, my Nursing and Midwifery Council number is 97JOO94E. I am here today because people living with dementia will die as a consequence of this lethal heatwave. The world is heating because of our use of fossil fuels and JP Morgan is funding this climate catastrophe. My code of conduct states that I must ‘Act without delay if [I] believe that there is a risk to patient safety or public protection.’ That danger is here and it is now.”

Dr David McKelvey, a GP who took part in the action, said: “This is the fourth time I have joined Doctors for XR in an action focusing on JP Morgan’s continued new investment in fossil fuels. Today we do not lightly engage in breaking a pane of glass in the mighty JP Morgan glass tower; it is done thoughtfully, carefully and with accountability. Nothing else seems to have let the light in – hopefully this crack will, for the sake of all our health.”

Dr Alice Clack, one of those who took action at JP Morgan on Sunday morning, said: “I am a consultant obstetrician and gynaecologist. I have worked extensively in West Africa training midwives and doctors, delivering emergency care, and improving maternity services. In the face of the climate and ecological emergency this work has become futile and dishonest, as it is now clear that unless we address the causes of these crises, the vulnerable across our planet, my patients, will suffer first and most.”

Dr Patrick Hart, a GP who took part in the action at JP Morgan, said: “Fossil fuels are destroying our future, but that can’t happen without financial backing. The people in this building know that funding the fossil fuel industry is funding the destruction of our future.”

“When a patient gets sick, the first thing you do is stop the harm. There is no point in administering an antidote to a patient while someone is still pumping poison into their body.”

“If we want to be healthy, we need a planet and a climate that can sustain life, and right now, the choices that are being made in this building are creating life threatening conditions for all of us. Conditions that I cannot treat.I want to help my patients live healthy lives, but the choices being made in this building are preventing me from doing so.”

Child and adolescent mental health specialist and former mental health nurse, Ali Rowe, who took part in the action, said: “Medical activism is rooted in creating challenges and facing difficult truths when the very institutions that are there to serve us fail to do so.

“This is an act of deep love for all. We act to save lives from the imminent danger of this unprecedented heat wave that is upon us. We act now to stop the harm. It is a necessity.”

[5] No new oil, gas or coal development if world is to reach net zero by 2050, says world energy body: