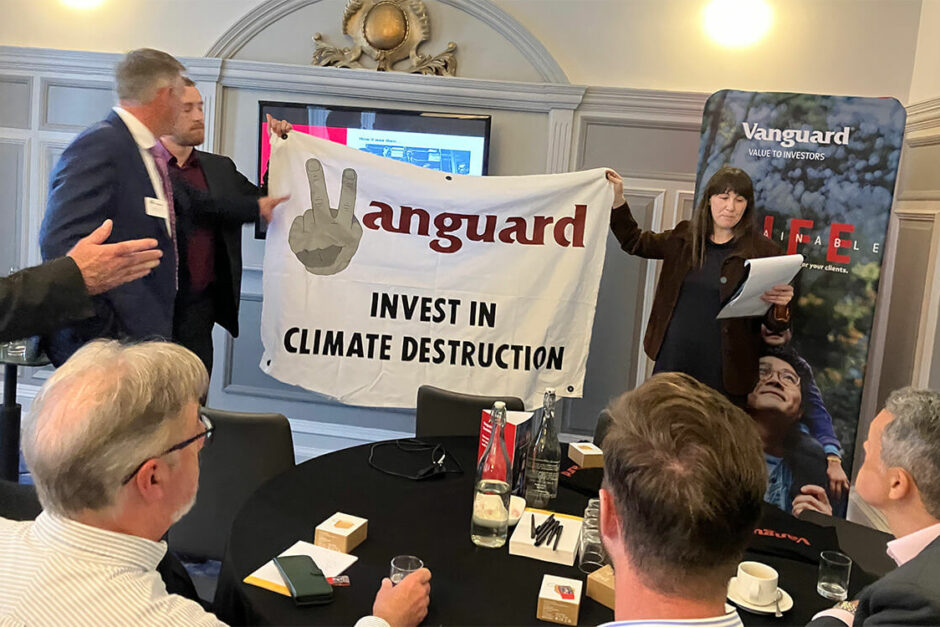 June was a huge success for Extinction Rebellion groups standing up to corporate lies and greenwash in the investment industry. On the first day of Vanguard Asset Managements UK ‘Sustainable Life’ roadshow, XR disrupted the conference in Glasgow, resulting in Vanguard cancelling the whole UK tour and moving it online. Concerned over further humiliation, company heads even admitted in an online meeting after the action that XR was the reason they had decided to move online.

For those that don’t know Vanguard, the company is one of the world’s biggest funders of climate destruction. Its investments in climate misery across the globe, leading to crop failure, biodiversity loss, and an increased risk of war and death.

Vanguard invests over £300billion in fossil fuels. We have to ask, how is this in line with “sustainable life”?

Vanguard invest over £100billion in coal, increasing coal investment last year and 23% of those investments are in coal expansion. Vanguard invest over £100billion in 12 of the world’s most devastating new fossil fuel projects, including in North Sea Oil and Gas. These are what a recent investigation in the Guardian call Carbon Bombs. Finance is blowing our carbon budget and Vanguard is one of the biggest climate criminals.

Vanguard has the power to support the shift towards a cleaner, greener, safer future by ending its investments in fossil fuels. But it prefers to take dirty money, maximising its short term profits while contributing to the misery of those in the Global South and future generations. We refuse to stay silent while Vanguard wilfully causes death and suffering.

Last month Vanguard unveiled its new net zero climate commitment, revealing that less than 5% of its total assets are in line with net zero by 2050. It means Vanguard has the worst climate targets among major asset managers. Responding to criticism from campaigners, the company’s CEO Mortimer Buckley stated that Vanguard is committed to maximising profits for its investors, rather than stopping investment in new oil, gas, and coal infrastructure.

After the disruption that made Vanguard cancel the rest of their “Sustainable Life” roadshows across nine cities, XR groups are getting ready to target Vanguard again this month. In July we are outside Vanguard’s offices everyday.

Vanguard must be held accountable! Find out more here: