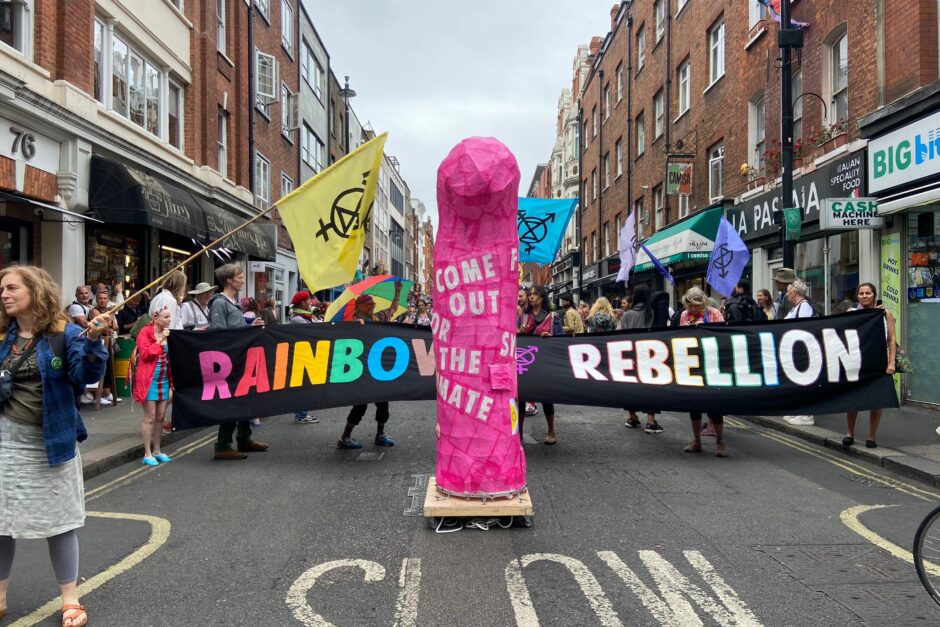 Rainbow Rebellion takes to the streets of
Soho, London, to demand action on
climate change 🌈 🌏

Rainbow Rebellion said that they had come to Soho because climate change “is an LGBTQIA+ issue”. They explained: “If we reach a point of climate breakdown and social collapse, marginalised groups – like the LGBTQIA+ community – will experience increased discrimination and violence. Members of our community are already disproportionately negatively affected by violence, lack of access to healthcare, homelessness, and displacement, especially those with multiple marginalised identities. The fight for LGBTQIA+ rights will be so much harder if climate change leads to social collapse. Our siblings in the Global South have been living with this reality for years. The queer community has stood and continues to stand up to demand social justice; we now need to demand climate justice as well. That’s why we decided to come to Soho, the historic heart of the queer community in London, to ask the queer community to join us.”

Rainbow Rebellion is a group of LGBTQIA+ people who believe that the LGBTQIA+ community must stand up for action on the climate crisis. The climate crisis will have a disproportionate impact on our community, but as a strong community with a heritage of activism and resistance, we can and should demand action.

If global temperatures continue to rise and go over 1.5* or 2* we will experience frequent environmental disasters, global food shortages, war, a spiralling cost of living, and mass displacement of communities across the world. In times of social collapse, marginalised groups – like the LGBTQIA+ community – experience increased discrimination and violence. This will be worse for people with intersectional identities – our Black, Indigenous, and People of Colour; our Disabled communities; elders; female-presenting; families; our people in economic instability. Our siblings in the Global South have been living with this reality for years.

We are still fighting for LGBTQIA+ rights, both here and for our siblings across the world. This fight will become even harder if we are struggling to deal with environmental and biodiversity crises at the same time.

The LGBTQIA+ community has developed out of the continual need to resist discrimination and injustice. Previous generations have fought for legal recognition of our identities and relationships, medical provision, and protections against discrimination. We are still fighting prejudice and hate crimes, and for trans rights and the rights of our siblings in other countries. This culture of resistance and resilience is part of our community’s DNA. We rebelled in order to survive and thrive in the past; now we can and must stand up against inaction on climate change to survive in the future.