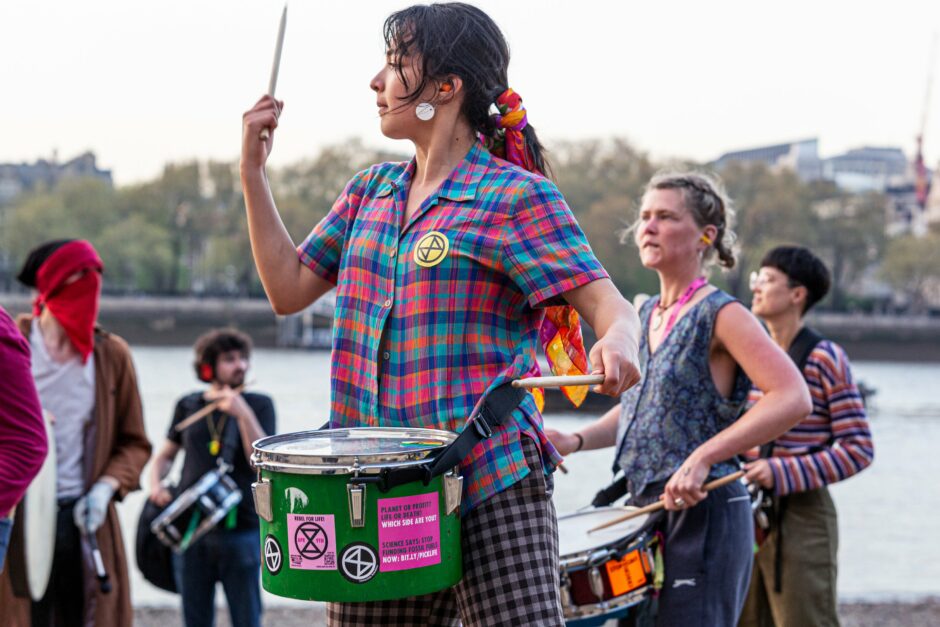 Yesterday was a day that will go down in the history books. Why? Because the government’s litany of repressive bills reached royal assent showing how far they are away from mainstream public opinion.

It was a suite of bills exposing the true nature of how the government feels about immigration, climate, healthcare, justice and how we get to vote, or rather, making it more complicated to vote!

At this point a natural response would be to throw the towel in, scream and question one’s sanity. Do that. Then reach for someone who feels the same. Rage, cry, laugh – do the full rollercoaster of emotions because that is what is needed.

Being gaslit by the state feels like shit. Knowingly, willingly with active intent – to the point where you can question your own sanity. Don’t. Facing difficult truths is painful but face them we will, together, stronger. And we will mobilise not just as XR but alongside all those who are taking action as a result of these bills. Remember, they’re doing this because we’re having an impact they’re scared shitless.

Below is a statement from XRUK offering some perspective on the PCSC Bill and other repressive legislation which has just been passed by the House of Lords and received ‘Royal Assent’ yesterday.

THESE ARE THE ACTIONS OF A FAILING STATE
Our system of government is fucked. It isn’t capable of meeting the massive challenges the climate crisis poses for our economy and society. Instead of rising to the moment or admitting defeat, the Government is lashing out, and as it goes down it will get more and more desperate, defensively and violently rejecting calls for change.

BE THE CHANGE
The government knows they aren’t up to the challenge and so do we. From the beginning, Extinction Rebellion understood that one of its tasks as a movement was to bring about a mode of politics with participation, fairness and transparency at its heart and our demands identified citizens’ assemblies as the best model out there.

PREPARE FOR HATE WITH LOVE
Now, more than ever, is the time to hold close our values of love, care and freedom. The PCSC Bill is designed to scare people away from participating in their own democracy and that must not happen, especially at a time when the government holds so little credibility for so many people for so many reasons.

These bills are meant to scare those of us who are working for change and they are also intended to put people off joining us. We know that legislation like this decreases the accessibility of civil disobedience for marginalised people even further as the state attempts to increase the risks involved in speaking up. In the face of their attempts to limit people’s participation in their own democracy we will call for more access for everyone.

WE HAVE A GLOBAL RESPONSIBILITY
This entire suite of bills – including the Nationalities and Borders Bill, the Judicial Review Bill, the Elections Bill, as well as the PCSC Bill – have chilling implications for democracy globally because of the status the UK is given internationally as a model of what is politically acceptable. As active citizens here in the UK, we have a global responsibility to resist the slide towards authoritarianism.

THIS IS OVERREACH
Nonviolent civil resistance is a rational response to the existential threat of the climate crisis. Just a few weeks before the PCSC Bill was passed Antonio Guterres, Secretary General of the UN, said:

In passing the PCSC Bill the government has just introduced legislation which has major clashes with the European Convention on Human Rights and the DPP vs Ziegler ruling. The Government is in the process of making laws we know parts of the police force in the UK feel are unecessary and are uncomfortable with enforcing. By pushing through the PCSC Bill they are also putting yet more pressure on courts that are already stretched and asking them to spend hundreds of hours dealing with nonviolent protesters.

The PCSC Bill was passed by The House of Lords earlier this week and received ‘Royal Assent’ yesterday, but will not come into force immediately. We won’t know for some time exactly where we stand legally. See this update from XRUK Legal Team and Political Circle on what elements relating to protest made it into the final Bill.

TOGETHER WE ARE STRONG
Our movement is still alive because we innovate, we know how to read the lay of the land and strategically adapt our tactics. We are resilient in the face of an increasingly authoritarian, brittle state because we have creativity and diversity on our side. We’ve mobilised families, scientists and healthcare workers, we do high level targetted nonviolent direct action and we welcome everyone onto the streets in acts of mass participation civil disobedience – in the words of one seasoned activist we have ‘democratised nonviolent direct action.’

These bills are designed to scare good people into staying at home, but we won’t be silenced.