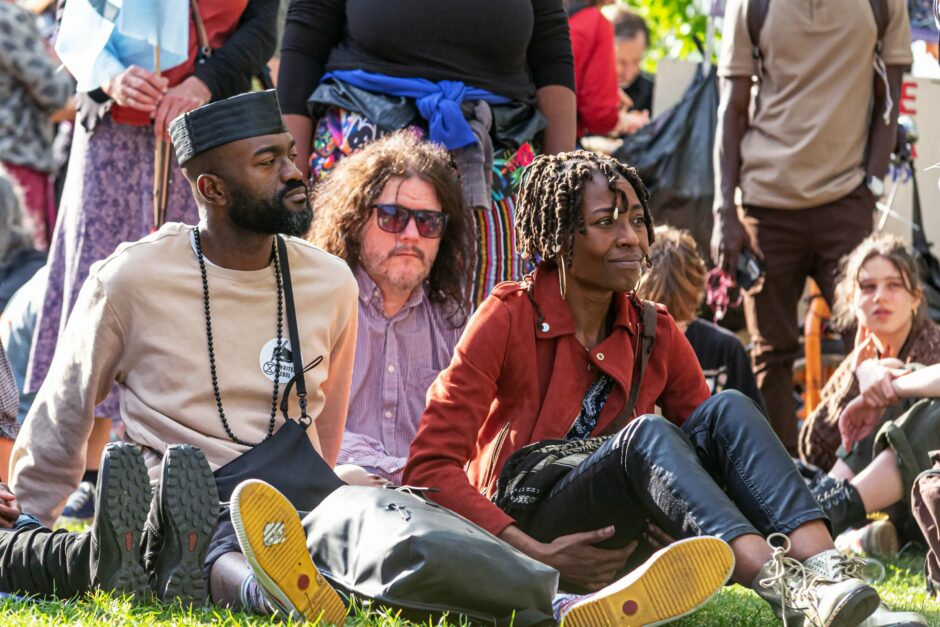 After meeting in Lyric Square (Hammersmith)  at 12:30pm, carnival-goers will march though West London to arrive at Shepherd’s Bush Green at around 1:30 pm. They will carry banners bearing messages explaining the precarious situation of the people of the Global South, including “We are (not) on the same boat”. Those unable to attend the march can head straight to the park to enjoy stalls, entertainment and discussions from 1:30 pm, closing at 7 pm.

Organised by London rebels, the event has two aims: 1) celebrating diversity and building a movement of movements by bringing together multiple groups from the local area while 2) offering a space for community members to share climate solutions to protect younger generations for the future.

Hester Campbell, mum of 3 and an XR Unify member, said: “Yesterday was Earth Day, how many people actually understand how much peril we are in? This is something that kept getting pushed to the back of my mind throughout my 30s. When I was 39 in 2019 I joined extinction rebellion with my children. I was born in Hammersmith in 1980. Everything since then has been pretty shit. We were born into a dying world. We’ve had all this time to change course and nothing has happened. Now there’s just 2 years left to drastically change everything, and the people suffering now in the Global South are not the ones who have caused this “

Carnival attendees can enjoy ‘Reggaerobics’ to dance and move to the iconic sound of the Rastafari from Jamaica, a sound rooted in resistance and activism. There will be discussion on local issues such as air pollution.

Many locals are descendents of people in countries recently hit severely by climate collapse. The borough is home to migrants from every continent of the world, many of whom have relatives in some of the countries and areas already hit by extreme weather events, such as the Caribbean, Somalia, Ethiopia, Eritrea, Syria, Lebanon, Algeria, Morocco and Afghanistan”.

Local resident and XR Unify member, Jam Zamand, said: “The west is quick to blame people in the Global South for what they call “local environmental damage” as a form of greenwashing and self blame when in fact the truth is, per the IPCC, report that overconsumption and use of fossil fuels from the ‘rich’ countries are causing extreme weather events and crop failure leading to internal displacement and malnutrition primarily in Africa and South Asia.

“The whole situation’s gotten so bad now that we have to accept that the next steps are mitigation and adaptation. But for BIPOC people here in the UK and West London, the term “we” connects ourselves with our immediate relations, but also with all of the other diasporas splattered across the globe and also our people back home. With the climate crisis, the people who can avert it are simply ignoring the people who are facing devastation right now! And that unfortunately has created the “other”, that is us who have to deal with the weight of the situation, and that is why we have to Unify or die.”

The recently released 6th Assessment Report from the IPCC warned that there is a “small but rapidly closing window” to secure a livable future and risks of climate disasters are rapidly intensifying around the world. This will directly impact food supplies across the world as well as here in the UK.

XR Unify member of Afro Caribbean descent, Robin Red, said: “The importance of this present time is undeniable. The futures of our communities of origin lie in the balance. We accept our obligations to our Mother Earth, to the people and all living species and fauna. To centre climate justice within the narrative of climate repair is why we are here. The first step is to stop the harm. The investment in fossil fuels must stop now.

“If learned patterns of behaviours are not examined, climate based displacement will increase. Presently there is no legal protective status for people displaced due to climate change. The people and lands who consume the least will fare the worst. The Borders bill from the UK Government moves in the direction of criminalizing and punishing people who have been displaced, many with forced repatriations. The Foreign Aid budget was cut, making the situation around the world much more difficult.

“We are not all in the same boat. We resist and we rebel. We are XR Unify.”

Hester Campbell added: “We recognise and pay homage to the rebellions of the past which have led to the liberation of wronged and oppressed peoples. The power is with us, the many, who demand a liveable world, a liveable future, because at present nowhere in the world is safe. The people united will never be defeated. So we have to unify to survive.”

Made up of activists who are Black, indigenous, People of Colour (BIPOC) and minorities, XR Unify emerged to help amplify unrepresented voices in Extinction Rebellion (XR). The group recognises that in order to find the solutions to the climate crisis we all need to be at the decision making table. Since their first meeting in June 2021, the group has started to adapt XR’s distinctive imagery and actions to reflect the diverse cultures around the world in which they have roots.