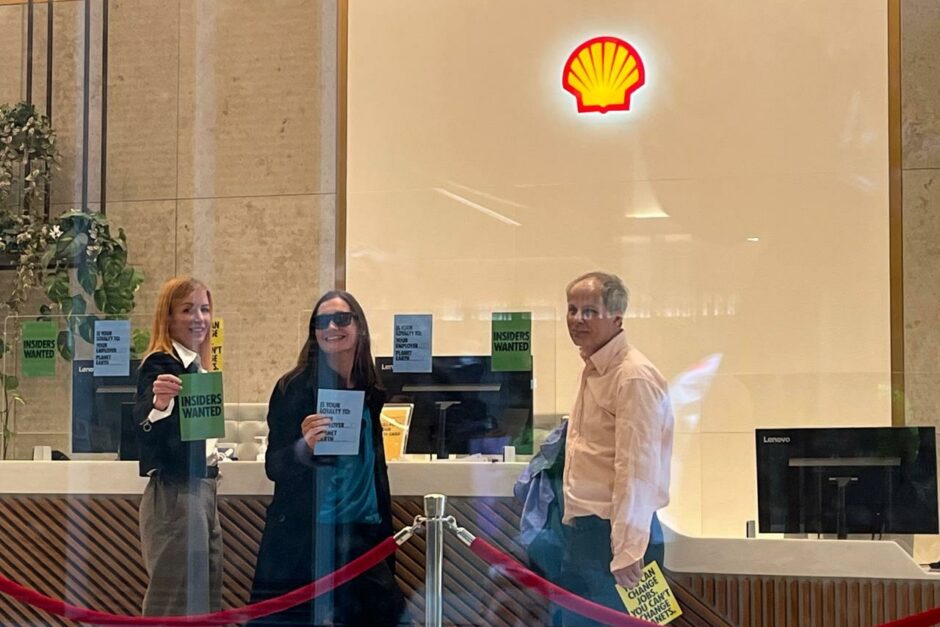 Extinction Rebellion has occupied the London Headquarters of oil giant Shell to demand a meeting with CEO Ben Van Beurden. 3 people have glued themselves to the reception desk and others are glued on in the entrances outside. Outside the building, members of XR’s whistleblowing platform TruthTeller used placards to invite named employers to share insider information about the company’s planet-damaging activities.

Just after 1.30pm, 3 people dressed as staff members gained entry to the building’s lobby, while others are glued on in the entrances. The livestream of the occupation can be viewed here: LIVE: Day 5 of the April Rebellion: Love in action – YouTube

Outside, one hundred people from XR’s whistleblowing platform TruthTeller each held up a placard with the name of an individual Shell employee and the words “Please Join Us”. Another group positioned a fireman’s trampoline below the office windows bearing the message: “Jump Ship”.

A flyer handed out to Shell employees invited them to join Extinction Rebellion, while there’s still time. It invited staff to “switch to the right side of history, before Shell turns toxic on your CV”.

TruthTeller’s flyer also invited staff to speak up and raise issues with corporate policy and behaviour with colleagues and management, post XR material on internal notice boards and common spaces, or anonymously share details about any of Shell’s climate damaging plans via the secure whistleblowing platform www.TruthTeller.Life.[1]

XR also offered to fund a number of career coaching sessions for staff thinking of leaving Shell and moving to companies specialising in renewables.

“As everyone knows, the fossil fuel industry’s social licence is fast expiring. In a few short years it will make the tobacco industry seem like an ethical choice.

We’re here to help employees at Shell and all planet-damaging companies to either speak up internally, share insider information via www.TruthTeller.Life or jump ship – before it’s too late.”

Today’s action follows an address to the world by UN Secretary General Antonio Guterres, who said business leaders were failing to take the action necessary to avoid climate disaster:

‘Governments and business leaders are saying one thing and doing another. Simply put, they are lying. And the results will be catastrophic.’[2]

Shell is one such company saying one thing in public and doing another in private.

It claims to be transitioning away from fossil fuels and into renewables. And yet between 2018 and 2020, Shell invested over 90% of its capital in fossil fuels, and only 3-5% in renewable energy.[3]

Shell has caused nearly 2 percent of all human-caused emissions.[4] That’s more emissions than most countries. It is still one of the top 25 emitters globally. In May last year, a court in the Hague court ordered Shell to cut carbon dioxide emissions by 45 percent over 2019 levels by 2030 – double its own targets. Shell has appealed.[5]

In its current plan, Shell continues to invest in new oil and plans a 20% increase in gas production over coming decades. [6]

Last month, activist shareholders brought a lawsuit against 13 of Shell’s directors for failing to produce a strategy that would keep it aligned with the Paris Agreements target. [7]

In 2020, Shell made windfall profits of 19.3 billion dollars, up from 4.8 billion the year before but rather than reinvest in renewables, it spent that  on huge dividends for directors and share buybacks[8]].  It also made $6.4 billion in its fourth quarter profits on the back of higher oil and gas prices.[9] from the recent rise in gas prices that are causing a cost of living crisis for people across the country. The UK government gave Shell a £90 million tax rebate last year. 40% of Shell profits are hidden in tax havens.[10]

In recent weeks, Shell has used the war in Ukraine to try to resurrect a project to drill in the Cambo oil field.[11] Energy companies including Shell are making ‘bonanza’ profits due to war in Ukraine, while the cost of living crisis is expected to leave millions in the UK unable to pay their bills, it has been revealed.[12]

Extinction Rebellion is calling on Shell’s directors to make a rapid and radical change of course.

Extinction Rebellion’s Tim Jones said: “The UN Secretary General has openly called out politicians and business leaders as liars. Shell is one of those liars. Rather than rapidly transitioning to renewables as it claims,  it is continuing to make unspeakable profits from oil and gas  – 19.3 billion dollars last year.

“I am here to beg the employees of this company, who I am sure are good, caring people, to look at what they are doing, to look at this machine they are a part of, and consider what needs to change. Please, everybody, come with us: walk away from a company leading us to destruction. It’s not too late.”

Today’s action at Shell is part of Extinction Rebellion’s ongoing protests in Central London. Through mass protests, targeted actions and fuel depot blockades, XR, is demanding an immediate end to all new investment in fossil fuels.[13]

UN Secretary General has said that continuing to invest in fossil fuels is “moral and economic madness.” The International Energy Agency has also  said we need to immediately cease all new fossil fuel expansion.[14]

1.TruthTeller is XR’s whistleblowing project to help employees at planet-damaging companies anonymously disclose what they know. We’re seeking out potential whistleblowers within target industries and asking them to share insider information via our secure platform www.TruthTeller.Life

TruthTeller is also a new type of precision activism.  As well as triggering leaks –  which we’ll publish safely and anonymously in collaboration with trusted news outlets –  we want to send a warning to any company guilty of greenwash or damage to the planet, that they’re at imminent risk of public exposure. TruthTeller is asking people to put their loyalty to their fellow humans and the future of the planet before their loyalty to their bosses. We want Whistleblowing for the Planet to be recognised as both a moral duty and a democratic right.

2.Guterres was speaking at the launch last week of the IPCC’s most recent report. In his address, Guterres said we are ‘firmly on track towards an unlivable planet’ and called on the people of the world to demand a rapid transition out of fossil fuels https://www.youtube.com/watch?v=EaZRvli9fgQ