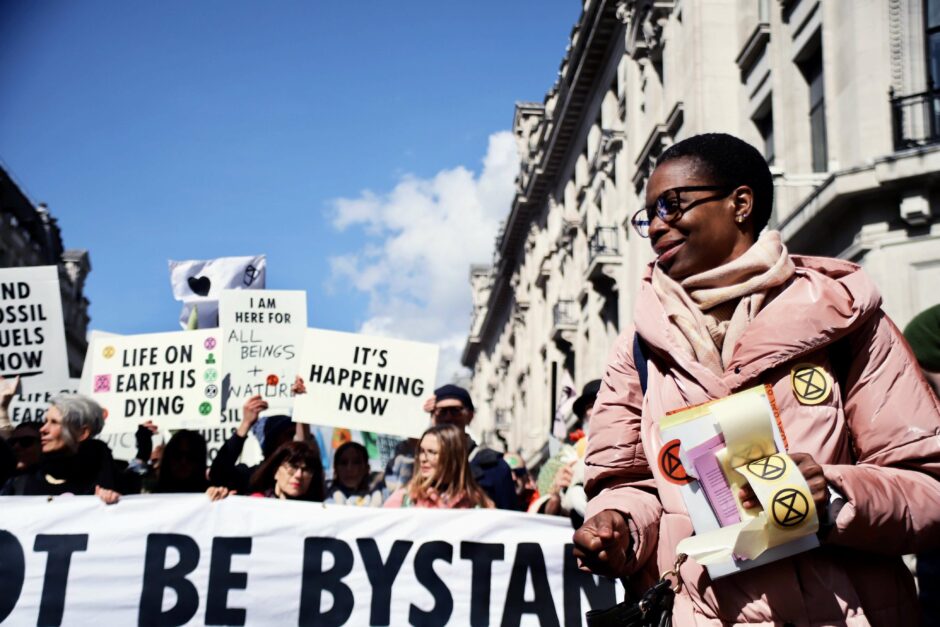 As petrol pumps around the country begin to run dry, the government has a choice: continue destroying life on Earth by doubling down on oil and gas and supporting corporate interest over people’s lives, or honour the UK’s Paris commitments and change course.

In short, put an end to all new fossil fuel investments immediately.

Extinction Rebellion is told time and again to stop disrupting ordinary people and target the bad guys instead. But it turns out when we disrupt carbon, people feel it, as almost everything we do economically relates to – or relies on – oil and gas. We recognise these protests are hitting people now, but as the UN Secretary General, Antonio Guterres has said, we are “on track for an unlivable future” if we continue to invest in fossil fuels. The disruption coming will be far greater and beyond our control unless this stops now.

When a system is causing harm, people have a responsibility to intervene.

Weather patterns have already destabilised. Last year we saw climate-related deaths on almost every continent. Madagascar is experiencing the first climate-related famine right now. Life as we know it is going to change, whether or not we choose to act on the climate crisis, and whether or not we like it. The UK government’s refusal to admit this is shameful dishonesty. In the words of its own Environment Agency, we must “adapt or die”.

We are out of time and our current state of democracy is completely incapable of acting with the speed and integrity needed in this moment of crisis. It’s now for the people, through a citizens’ assembly, to determine the most effective, fair, and sustainable way to transition. Polling shows the UK general public wants urgent action on climate, but we are being lied to by a government in the pocket of big oil while energy companies get tax breaks and make huge profits off war in Ukraine. The climate emergency helps us see everything is interconnected and whether it’s Covid, war in Ukraine or the cost of living crisis, we can’t wait for a better time to tackle this because there won’t be one.

This is why Extinction Rebellion will continue to join the dots through our actions. Disruption is the only power ordinary people have left to change things, to break the law to stop a greater crime taking place.

And our actions are working. By causing nonviolent economic disruption at oil facilities with the Just Stop Oil coalition while holding loving, peaceful and defiant resistance in London, we are becoming impossible to ignore and easy to join. Outreach efforts are proving to be a huge success and by giving rebels different pathways into action, we are seeing large numbers of new people joining us on the streets, getting trained, and preparing for ongoing Rebellion. All of these actions are playing a role in creating a far reaching impact and everyone’s contribution is vital and necessary, whether you’re locked to an oil rig, sitting in a road, handing out fliers or supporting people at police stations.

We are facing the loss of everything and we all have a choice. To let this happen, or to put ourselves in the way to stop it. To refuse to be complicit while people die right now in the climate and ecological crisis, or to obey the rules of a self terminating civilisation and live with the consequences.

To create nonviolent resistance which is impossible to ignore, or to be a bystander.

The plan is simple: We will continue to cause disruption until the government agrees to do what the IPCC, the International Energy Agency, the United Nations, its own Committee on Climate Change, and scientists everywhere are saying we absolutely must do now: to end all new fossil fuel investments immediately. Because what is there left to do now but take action like this, when everything else so far has failed on a cataclysmic scale?

If the government agrees to this first basic step to address the climate crisis, we will go home.