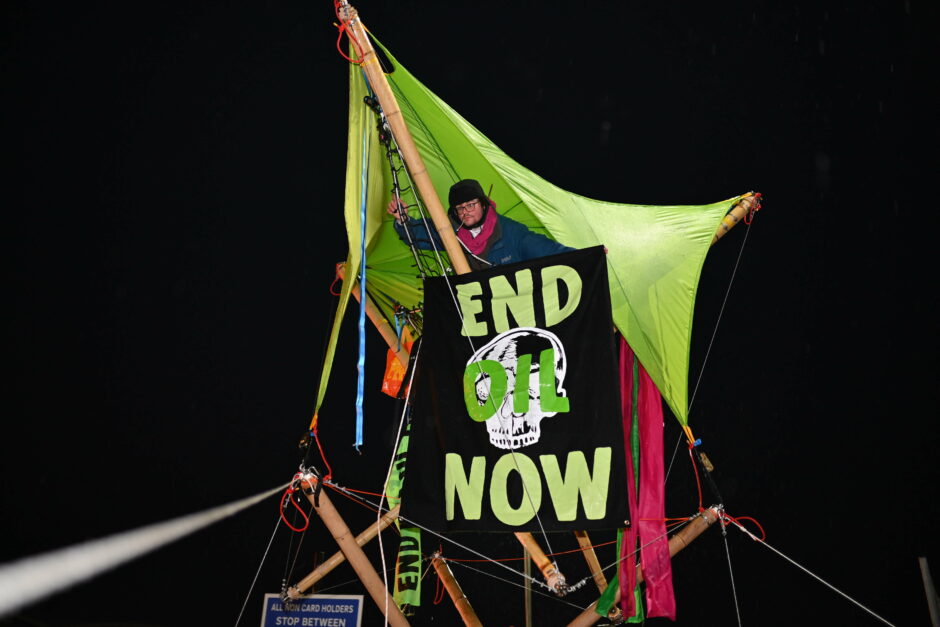 As the UK woke up on Friday morning to the biggest rise in energy prices in living memory, hundreds of people blocked 10 oil facilities across the UK.

At the crack of dawn, people sat on cold tarmac, chained themselves to barrels of concrete, and climbed on top of lorries. They will stay for as long as they can and return if forced to leave. Extinction Rebellion and the Just Stop Oil Coalition are taking this action because the fossil fuel industry is driving civilisation off a cliff.

You might think a protest like this is madness when oil and gas prices are predicted to leave millions in the UK unable to pay their bills but the truth is, both our reliance on fossil fuels and the cost of living crisis – or rather, the cost of living ‘scandal’ – have the same cause. That’s why we’re demanding an immediate end to all new fossil fuel investments.

Just yesterday the latest IPCC report came out and the media barely noticed. The Secretary General of the United Nations, Antonio Guterres put it bluntly in his speech: “The jury has reached a verdict. And it is damning. This report is a litany of broken climate promises. It is a file of shame, cataloguing the empty pledges that put us firmly on track towards an unlivable world.

“This is not fiction or exaggeration. It is what science tells us will result from our current energy policies. Some government and business leaders are saying one thing – but doing another. Simply put, they are lying. And the results will be catastrophic.”

We are running out of time and the government is failing us.

Across radio stations on Friday 1st April, members of the public cried down the phone to presenters as they described the prospect of hungry children and bills that leave pensioners choosing between heating and eating. All the while, energy companies are making bonanza profits, exploiting the Ukraine crisis to pursue more drilling contracts. It’s inhumane and it doesn’t add up. The UK Government is choosing to put corporate profit before the lives and livelihoods of ordinary people. It is choosing to continue relying on volatile fossil fuels that are driving climate chaos around the globe, rather than taking the climate action that our own Office for Budget Responsibility says is affordable and would create thousands of jobs.

The government is using the war in Ukraine as a political football and an excuse to expand on fossil fuel extraction. Just a few months on from the “last chance” of COP26, the Prime Minister now claims the current crisis in Ukraine and cost of living scandal require a “climate change pass”. His government is looking to “remove barriers” to increased extraction of fossil fuels from the North Sea, despite the majority of this being exported overseas and our own Energy Secretary admitting it won’t do anything to address people’s energy bills.

When you join the dots on extortionate profiteering by corporations, obscene increases in poverty, food banks that have become permanent features of communities, and people unable to afford their bills, we can see how much we have to pull together and take a stand. We know the UK public want faster climate action in the face of this cost of living scandal. So, after our blockades at oil facilities, Extinction Rebellion will be taking to the streets in London from April 9th to give fossil fuels the final shove out the door. If you’re desperate for change, please join us.

Compared to the bloodshed in Ukraine, the fight for 1.5˚C may seem abstract, but it is all too real. It is the fight for all those on the frontline of the climate crisis, in particular our children and our young people and the majority of the world’s population in the countries feeling the first and worst effects of increasing extreme weather. It is the fight for a peaceful and organised international community where we take power away from war mongers funded by fossil fuels. It is the fight for the future of humanity and for those we love.

Even the UN is now pleading to ordinary people to rise up and do what World leaders refuse to do. Antonio Guterres concluded: “Climate activists are sometimes depicted as dangerous radicals. But the truly dangerous radicals are the countries that are increasing the production of fossil fuels. Investing in new fossil fuels infrastructure is moral and economic madness.

Leaders must lead, but all of us can do our part. We owe a debt to young people, civil society and indigenous communities for sounding the alarm and holding leaders accountable. We need to build on their work to create a grassroots movement that cannot be ignored. If you live in a big city, a rural area or a small island state, if you invest in the stock market, if you care about justice and our children’s futures I am appealing directly to you. Demand an end to all fossil fuel subsidies.”

These protests are what a people powered response to the climate crisis looks like. It is time for all of us to refuse to stand by while the selfish few buy and sell our future and say ‘Not in my name’.

Alanna Byrne from the XR Media Team – this piece was adapted from a similar piece in the Evening Standard on 1 April.