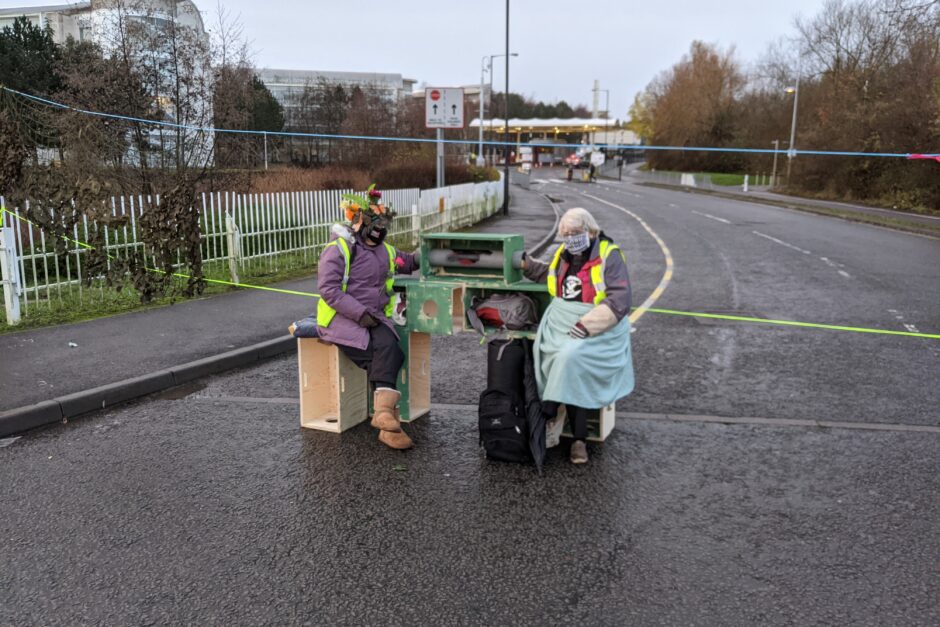 An 80-year old vicar who sat in the road during a protest outside Britain’s largest military site today had her conviction quashed on appeal.

A Bristol appeal court ruled that Rev Sue Parfitt had a “lawful excuse” for her peaceful protest and that her use of the road was ‘reasonable’.

Sue, who is also a member of Christian Climate Action, was found guilty of obstruction of the highway at Bristol Magistrates’ Court last June after sitting in her camp chair for four hours outside the Ministry of Defence’s procurement site Abbey Wood, near Bristol.

The protest in December 2020 took place on the fifth anniversary of the Paris Agreement and followed the Government’s announcement of a £24 billion funding boost for the Ministry of Defence, twice that allocated to tackling the climate crisis. Around 20 people blockaded three entrances to the complex, preventing dozens of MOD workers from entering.

Sue, who has been arrested numerous times for climate protests, was acquitted earlier this year by a crown court jury for her part in stopping a train at Shadwell DLR station in October 2019.

Today’s result is the latest in a number of successful Extinction Rebellion appeals in the wake of the Supreme Court’s landmark Ziegler ruling.

Sue’s defence lawyer, Mike Schwarz of Hodge Jones and Allen, said: “This successful appeal, overturning a district judge’s verdict in the magistrates’ court, underlines the point that the right to protest, particularly on public roads, must be taken seriously.  The ‘right to protest’ means nothing if it is not rigorously applied by prosecutors and courts, at all levels and at every stage of the criminal justice system.”

‘I feel very pleased about today as I think my guilty verdict in June was not right. Those of us who are resisting climate meltdown are not the criminals. As Antonio Guterres said last month, it is the failure of climate leadership that is criminal.’