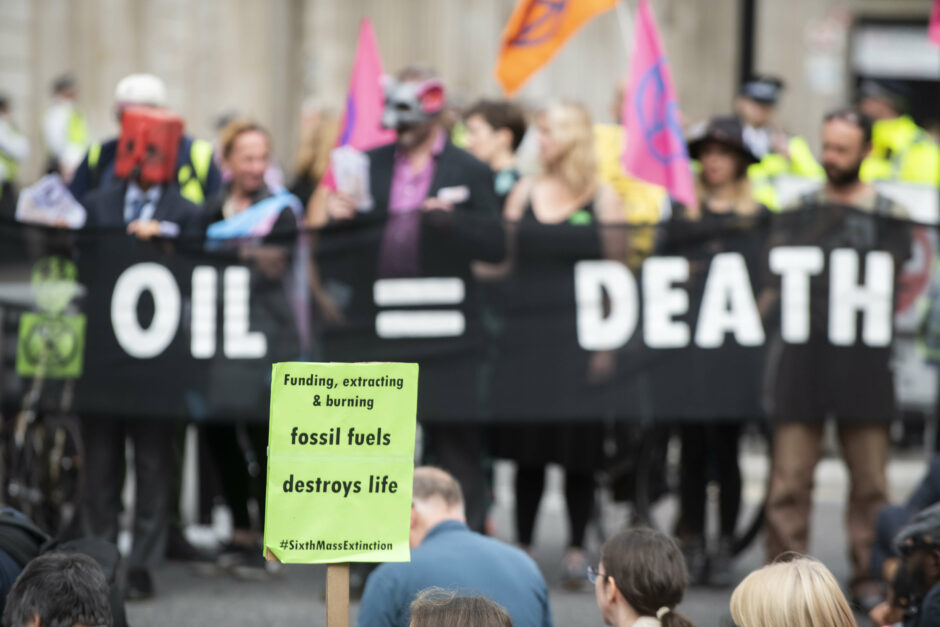 Extinction Rebellion launched plans this morning to block major UK oil refineries in April as part of their Rebellion, beginning on April 9th. Although the exact locations are yet to be made public, the group says it intends to ‘stop the harm at the source’ and create enough disruption to force the UK government to commit to Extinction Rebellion’s immediate demand: to stop the fossil fuel economy.

Laser focused action will target the fossil fuel industry to cause maximum nonviolent disruption and tell the story of the fossil fuelled corruption at the heart of our democracy, while standing in solidarity with all people around the world who are defending their lives, land, wildlife and cultures in the face of the crisis.

Extinction Rebellion will pull together with other movements for change to disrupt the fossil fuel industry enough to create a tipping point moment. The group Just Stop Oil will also be blocking refineries across the UK, with other groups to be confirmed.  A spokesperson for Extinction Rebellion said, “We are calling on protest groups, NGOs and individuals to join us and take a stand to stop fossil fuels once and for all. Now is the time, this is the moment. Don’t sit this one out!”

The plans come amid the ongoing conflict in Ukraine and on the heels of last week’s dire IPCC report and , which acknowledges the ‘widespread’ damage that is already happening, and that the limits of adaptation are now being breached.

Tim Crosland of Plan B, said: “Our addiction to fossil fuels must end immediately if there’s to be any hope left of tackling the climate crisis. There can be no denying this anymore. Last week’s devastating IPCC report is just the latest in a series of increasingly desperate warnings from scientists. We know what is happening, we know what needs to be done and we know those in power are failing us.

“The Ukraine conflict and the climate crisis have the same underlying cause: the imperialist pursuit of land and resources for profit, concentrating power in the hands of toxic individuals and corporations. By decarbonising our economies we can take power back from war mongers and change course, averting climate breakdown and collapse. But it must happen now, before governments use the conflict as an excuse to get off Russian oil and gas, only to begin drilling closer to home.”

Clare Farrell, Extinction Rebellion co-founder said: “Oil refineries are symbolic of continued extraction and profit for a small group of very wealthy companies at the expense of everyone else. We burn them, pollute our cities, poison ourselves and our children whilst committing to climate breakdown. It’s no wonder the entire environmental movement is focussing on ending fossil fuels and the death they cause. The writing is on the wall, and we are out of time.

“We face an ongoing cost of living crisis with fossil fuel companies making record breakingly massive profits. We have failed to insulate homes or make progress on energy efficiency here in the UK and experts are expecting an especially difficult winter later this year unless bold effort is made in the name of protecting the vulnerable and the poor. The government’s net zero commitments are being called into question, with some politicians and think tanks calling for a referendum on net zero, claiming that British people “can’t afford” to address climate change. But the truth is the opposite, the UK can afford to change and we can’t afford not to.

“Boris Johnson arguing for a ‘climate change pass’ involving new fossil fuel development sidelines the decades of failure to prevent millions of deaths from pollution and climate breakdown by building in decades more failure and more millions of deaths. We need to decarbonise and to do so as fast as possible.”

This morning, Extinction Rebellion UK sent a letter to the UK Government to state the April plans. The letter says, “Every day the UK government fails to act makes our common future more bleak, our prospects more terrifying. And you know this. You have understood implicitly the path our planet is on since Sir Patrick Vallance, Government Chief Scientific Adviser presented the facts to you on 28 January 2020.”

It concludes: “So, either you do what the entire scientific community and the International Energy Agency is telling us we need to do to save ourselves and stop all fossil fuel investments immediately, or in April we are going to do what you refuse to do. We’re going to stop the UK oil flow and bring the country with us.”

Following the beginning of the refineries blockades, Extinction Rebellion will then ‘flood London’ with people from the 9th April. With a simple, agile, participation design, we plan to be easy to find, easy to join, disruptive and impossible to ignore. We will create the most roadblocks we ever have with a new and impactful action design.

On the heels of the Extinction Rebellion 2022 UK Strategy released in January, arguably XR UK’s most exciting plan of action yet, the Rebellion aims to reignite XR’s original Theory of Change, and mass mobilise towards 3.5% of the population. This will mean a move away from Rebellions involving multiple targeted direct actions, towards focused acts of mass participation to overwhelm the state.

Gully Bujak from Extinction Rebellion UK, said: “This year we’re asking you to step up. We’re asking you to refuse to be a bystander, while our world is sold and burned by a greedy minority. If you’ve sat on the fence until now and asked yourself, “what can I do?” then here’s your answer. Nonviolent civil resistance is simply our best shot at forcing the government to take responsibility. In 2019 we disrupted central London for 10 days and the government came to the negotiating table – two weeks later, parliament became the first in the world to declare a climate emergency. Civil disobedience is beyond justified, and we know it works, we just need more people. We need you. Come with us on April 9th. Don’t just look up, step up – and then sit down and claim your place in history.”

Extinction Rebellion UK has set out on its most ambitious mobilisation plan yet this year. It’s called Project 3.5 and the idea is a simple one: the more of us there are, the harder we are to ignore. It’s people power, pure and simple. It’s worked throughout history and across the globe, and it will work again.

From now on, everyone is called upon to help us grow Extinction Rebellion, mobilising towards 3.5% of the population will be at our core  – until we’re too big to be ignored and the government is forced to the negotiating table.

The tools themselves are systematic, cyclical and scalable so that 3 or 3,000 rebels can easily pick them up, run with them, and keep going in a rinse, refine, repeat rhythm, having hundreds of thousands of meaningful conversations.

Alanna Byrne of Extinction Rebellion UK, said: “As our planet passes multiple tipping points, and the UK sleepwalks into authoritarianism, what XR does this year will affect everything. So, we are mobilising across the UK like never before, for the biggest collective act of nonviolent civil resistance in history. Now is the moment to begin building a world where love, care and freedom are prioritised.

Will you sit back and do nothing? Or will you step up?”

[5] Letter to the UK Government: https://extinctionrebellion.uk/2022/03/09/letter-to-the-prime-minister-from-xr-uk/