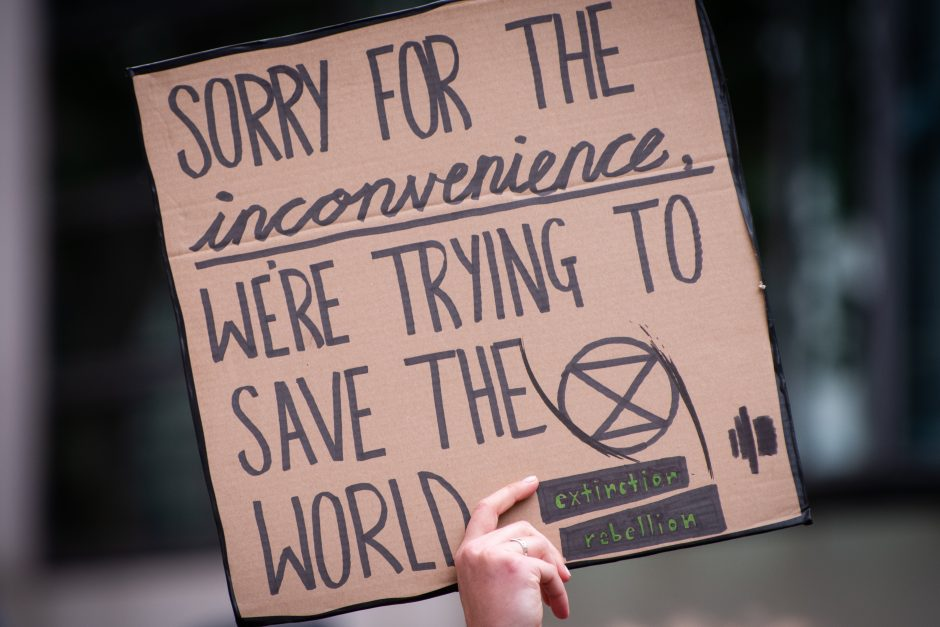 As the year progressed, the pandemic and subsequent lockdown continued to make climate actions challenging, if not impossible. Gatherings of large groups became difficult or often illegal. Once-thriving local and regional meetings had become restricted largely to Zoom. But that did not stop people from XR and associated groups across the country planning to revive climate protests as soon as conditions allowed. So for this issue of the Newsletter we’ve put together a few of the highlights from 2021 to celebrate their success.

January/February | Swampy is back!

Dan Hooper, known as Swampy, became famous in the 1990s during protests against road building. After spending the last 16 years living in an eco-community in rural Wales, in January he was back taking part in a headline-grabbing occupation by supporters of HS2 Rebellion of tunnels at Euston, London. In an interview with the Guardian, he said: ‘HS2 is truly monstrous. Parliament has declared a climate and ecological emergency but the government goes ahead with a carbon-intensive mega-project… a shuttle service for the mega-rich rather than for ordinary people.

In October 2019 Dan was arrested during an XR protest at the Valero oil refinery in Pembrokeshire. Commenting to ITV news on his return to the limelight, he said that Extinction Rebellion has given him ‘hope’, after feeling ‘almost an apathy’ about not being able to change things. ‘My beliefs are the same as they always were. Extinction Rebellion started happening and I think there is hope. I believe there is hope.’

The rights to peacefully assemble and protest are a fundamental part of any democracy, empowering people to have their voices heard, in addition to holding the Government to account. The Police, Crime, Sentencing and Courts Bill is a blatant attempt to create an authoritarian police state, where the voices of ordinary people, particularly those most marginalised and disadvantaged, are silenced by state-sanctioned penalties. In March XR joined with a coalition of UK organisations, groups and social movements of all ethnic backgrounds, gender identities, sexualities, faiths, abilities, ages and social standings, who have united to challenge the Bill.

Throughout the year protests, both actual and digital, have mobilised this broad coalition against the Bill. More than 350 civil society organisations have spoken out against the Bill; 600,000 people signed a petition in the summer and more than 700 legal academics have urged the government to rethink it.

The Bill is currently progressing through the Lords, with voting from January 10th to 17th. You can take part in the protests and join the National Day of Action on Saturday 15th:  #KillTheBill.

At the start of April, XR’s Global Action Network and Money Rebellion joined together to target central & private banks. The aim was to highlight the deadly role of banks in funding the fossil fuel industry, and their part in a suicidal economic system that financially incentivises harm to biodiversity, the climate, and our future.

Throughout the month protests continued. For example, at Barclays’ HQ seven women wore patches reading ‘Better broken windows than broken promises’ and placed stickers on the windows of the bank reading ‘In case of climate emergency break glass’ before carefully breaking the glass with hammers and chisels. The women took great care to ensure the safety of bank staff, fellow activists and passersby. They then sat down next to the broken windows and waited to be arrested.

May | Rebellion of One

May 1st saw hundreds of XR people sitting alone on busy roads and junctions wearing signs with messages about their fears for the future. One of them, Morgan Trowland, a civil engineer from Hackney, said: ‘I’m terrified that billions will die because of the climate crisis, humans and non-humans. I’m freaking out that many people are accepting this, or feel powerless to change the course. I want to show onlookers that we each have phenomenal power’. Morgan was later arrested and charged with obstruction of a highway.

Protests took place in towns and cities across the country, including Nottingham, Birmingham, Oxford, Bradford, Newcastle and Swansea.

On May 19th, a group of scientists from XR locked themselves to a mechanical tree in the Science Museum, the centrepiece of the Shell sponsored ‘Our Future Planet’ exhibition. The group, who used bicycle cables and D-locks to lock themselves inside the exhibit on the opening day, explained that the decision by the Science Museum Group to continue to accept Shell sponsorship gives legitimacy to the fossil fuel giant’s planetary destruction. Naturally, the group took great care not to damage the exhibit and to respect safety regulations and COVID rules.

June | G7 and Free the Press

Summer at last, and Extinction Rebellion was back on the streets in force. Successful protests at the G7 Summit in St Ives, Cornwall were followed on June 27th by a headline-grabbing dump of 7 tons of horse sh*t outside the Daily Mail offices in London. The protest initiated a day of action as part of our Free the Press (FTP) campaign, which demanded an end to media corruption that suppresses the truth from the public for profit.

On August 23rd a huge pink table was erected in central London at the start of two weeks of protest demanding the UK government stop investments in fossil fuels. Throughout the Rebellion the table became the centrepiece for ‘crisis talks’ to encourage people to discuss the climate emergency.

In the following two weeks junctions at Tower Bridge, London Bridge, Cambridge Circus, Cromwell Road, Long Acre and Covent Garden were brought to a standstill. There were localised blockades of banks and government departments, marches, rallies, carnivals, fasting, feed-ins, die-ins, sleep-overs in both McDonalds and the Natural History Museum, an occupation of St Paul’s, Fashion Action protests in Oxford Street and reaching exciting new heights of mobilisation through Digital Rebellion.

During the Rebellion over 500 arrests were made. But let us not forget that these brave people were supported by hundreds of others: stewards, litter-pickers, food-providers, infrastructure-sorters, banner-makers, leafleters, de-escalators, arrestee-supporters as well as backroom volunteers working through the night.

November 2021: COP26 came and went. Amid all his bluster and ridiculous football analogies, Boris Johnson surely missed an opportunity to make a choice classical analogy. The Greek word kairos refers to a time when conditions are right to make a crucial decision. That’s where we are now. We are at that crucial time. This is the decisive moment – this is kairos. 100,000 protesters in Glasgow knew that. Protesters all over the globe knew that. So do people whose lives are already catastrophically affected by climate change – in Uganda, Moldova, the Marshall Islands, the Philippines, Madagascar, Sri Lanka, Bangladesh, Puerto Rico, Haiti, the Bahamas…

November 26th, Black Friday, has become the major global discount day. Starting before dawn, members of XR  blocked a total of 15 Amazon fulfilment centres across Europe.  In the UK there were blockades in Doncaster, Darlington, Newcastle, Manchester, Peterborough, Derby, Coventry, Rugeley, Dartford, Bristol, Tilbury, Milton Keynes and Dunfermline. These sites account for just over 50% of Amazon deliveries in the UK.

Black Friday epitomises an obsession with overconsumption that is not consistent with a liveable planet. Amazon and companies like it have capitalised on our desire for convenience and stoked rampant consumerism at the expense of the natural world, trapping consumers inside a cycle of buying our way to oblivion.

Following a ruling by the Court of Appeal on December 8th, James Brown, the blind Paralympian who climbed on top of an aeroplane at London’s City Airport in October 2019, was released on bail from Wandsworth Prison where he had been serving a 12-month sentence.  The City Airport occupation was intended to peacefully disrupt ‘business as usual’ and highlight the incompatibility of City Airport’s half a billion pound planned expansion with a liveable future.

James has expressed his gratitude for the support he has received from fellow Rebels. And his bravery motivates us to continue the rebellion! “Since my conviction, many people have written to say that they have been inspired to step up, take bold action and make a stand.”

The following week, six people from XR  who stopped a Docklands Railway train at Canary Wharf in April 2019 were acquitted after convincing a jury their behaviour was a lawful response to imminent climate breakdown and ecological collapse. The six,  including 85-year-old grandad Phil Kingston, were found not guilty at Inner London Crown Court of obstructing trains or carriages on the railway. All six admitted their part in the action and its planning, but argued they were within their rights to protest.

These and other victories last year could not have been possible without your generous donations to the UK legal fundraiser. With your help, we have so far supported over 750 rebels through their court process. In addition to the DLR trial and James Brown, in April six activists were acquitted on charges of criminal damage to Shell HQ building in London’s Waterloo in April 2019. In June, the Supreme Court ‘Ziegler’ judgement ruled that disruptive protests can be lawful, when certain criteria are met. Since then, our legal team has been hard at work to ensure we challenge relevant charges and appeal previous convictions. In total 42 trials and appeals have so far resulted in a not guilty verdict.

So here’s looking forward to another, and much bigger, year of action and protests. This month we will see the roll-out of the 2022 XR UK Strategy, with a virtual and in-person tour (depending upon Covid restrictions). The strategy includes a timeline for the year, with clear direction and focussed actions together with messages and resources to support your local and community groups.

The onset of the pandemic in 2020 forced the movement towards smaller, more targeted, and by their nature, more covid safe, actions. Now XR’s strategy will be to return to its roots, rolling out a nationwide program of door to door canvassing, talks, training and mass participation civil disobedience campaigns with the aim of engaging the largest possible number of activists and supporters.

This is kairos! Demand the impossible!

New to XR? Join up to the Rebellion Academy

This is an exciting new online learning platform where you can find out more about XRUK, discover your place in the movement, and work through online training modules to prepare you for different roles.

All the modules can be worked through in your own time. You can search to see which ones are most suitable/useful for you. Whatever type of Rebel you are, there’s something for everyone.

There are accessible audio versions to listen to, as well as video and text versions, and all include interactive features to help reinforce your understanding.

The first Global Newsletter of 2022 is out Friday 14th January and we’ve got some good news stories to inspire you. Find out how Rebels in Serbia created a protest movement so strong it has left their government and a giant mining conglomerate on the back foot. Read about how Rebels in Finland got their government to report on the climate crisis in the same way as the pandemic. And find out about the new wave of global climate protest groups that are taking direct action to the next level. Subscribe now by hitting this link.

The UK Newsletter needs you!

We’re always looking for new writers to join our team! Are you keen to tell rebellion stories and help grow the movement? Do you keep an eye on the news and what is and isn’t being said? Then please get in touch!

Our regular UK Newsletter aims to be representative of the whole movement and its local and regional groups. So, please send in your news, feedback and comments.

You can email us at XR-UKNewsletter@protonmail.com or join our channel on Mattermost: UK Emails and Newsletter Requests. The UK Newsletter normally comes out on the first Monday of the month, so the deadline for news, announcements and stories is the end of the preceding week.