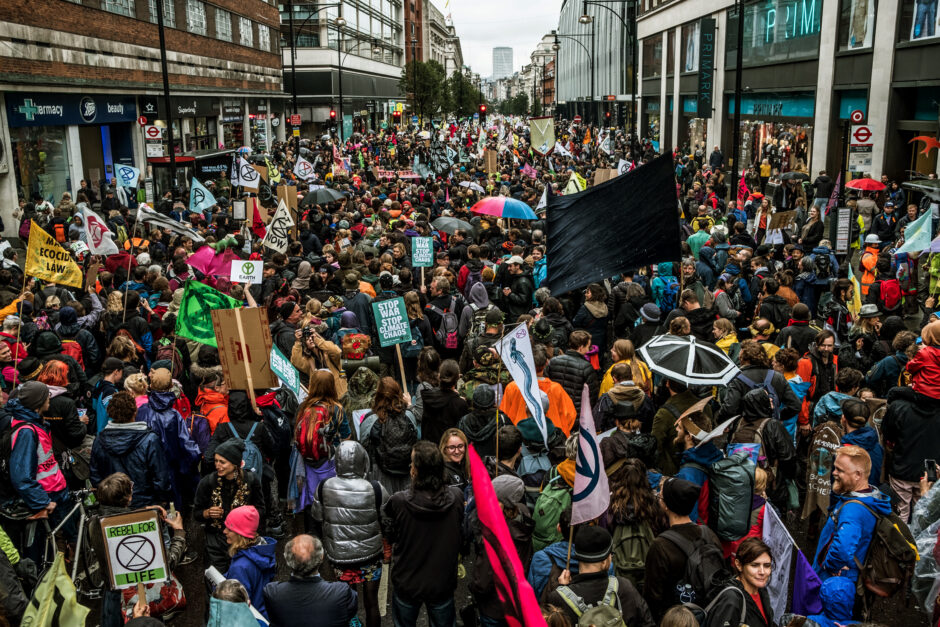 Extinction Rebellion announces plans for April 2022: ‘The COP process has failed, it’s up to all of us now’

Extinction Rebellion UK responds to the failure of the COP process with plans to mobilise two million in the UK towards mass civil disobedience, with the first major campaign of civil resistance taking place in April 2022.

The COP process has failed even by its own standards, the most important of which being limiting temperature increases to 1.5˚C above pre-industrial levels. The IPCC says that in order to avoid breaching 1.5˚C, global emissions need to fall by 45% by 2030. [1] Following COP26, according to the commitments made by the attending nations, the world is on track for a 16% increase in emissions by 2030. [2]

COP26 failed to heed the calls of experts, including the IPCC Chair, Dr. Hoesung Lee, for “immediate, rapid, global wide-ranging” global emissions decline. In the words of the Executive Secretary of the United Nations Framework Convention on Climate Change Patricia Espinosa, COP26 leaves the human race continuing to “invest in our own extinction.”

Nuala Gathercole Lam of Extinction Rebellion, said: “The tragic lack of action is not for a shortage of potential solutions to the climate crisis, but down to a lack of political will to make difficult changes that threaten powerful financial interests. For real progress to be made in future climate talks, one of the major polluting nations must step up and break the deadlock.

“The theory behind Extinction Rebellion is that mass participation in civil disobedience – on the doorstep of the government, media and elites – is our best shot at creating the political conditions for the UK to step up and play that role.”

Research carried out by Erica Chenoweth, a political scientist at Harvard University, and Maria Stephan, a researcher at the International Centre for Nonviolent Conflict, found that over the course of the twentieth-century movements which achieved active engagement of at least 3.5 percent of the population have never failed to bring about significant social and political change. [3] In the UK that is 2.3 million people.

Following the large numbers Extinction Rebellion brought onto the streets in April and October 2019, the onset of the pandemic in early 2020 forced the movement towards smaller, more targeted, and by their nature more covid safe, actions. Now the civil disobedience group will return to its roots, rolling out a nationwide program of door to door canvassing, talks, trainings and mass participation civil disobedience campaigns, with the aim of engaging 2.3 million people.

Gathercole Lam added: “While our mass participation campaigns of April and October 2019 played a significant role in driving forward the recognition of the climate and ecological crisis – the UK parliament was the first to declare a climate emergency, our government was the first major economy to sign a net-zero date into law and the British public have the highest levels of climate concern globally – XR’s actions have not yet brought about the real action on the part of government needed to reduce emissions and restore biodiversity.

“That’s why in 2022 we will be working to grow our numbers and developing designs for civil resistance campaigns, the first of which will take place in April 2022. Our mobilisation program will continue to build numbers through the year with the aim of achieving XR’s three demands.

“The failure of COP26, and indeed the COP process generally, is devastating but not surprising – it is clearer than ever now that it’s up to all of us.” [4] [5]

The April date will be released in the New Year.