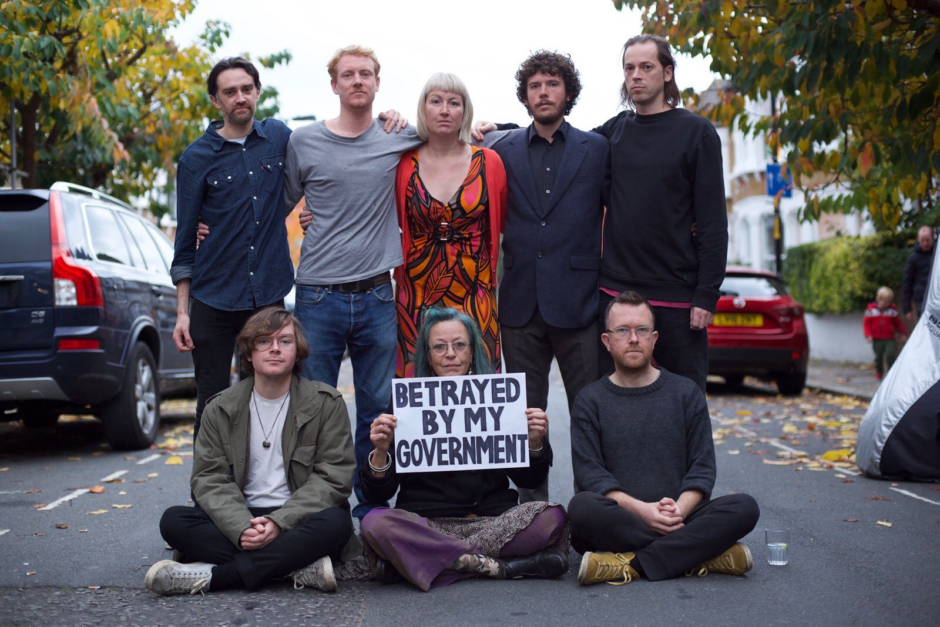 ‘You can’t imprison a flood, you can’t bankrupt a fire’: Highway 9 sentenced to prison

Beginning on Tuesday morning, nine people from Insulate Britain faced trial at the High Court for breaking the injunction on the M25. This morning, all nine were sentenced to prison for between two and six months, with the prosecution arguing for excessive costs to each individual, the final amount of which will be released tomorrow.

Upon sentencing, one of the nine, Emma Smart, announced that she would begin a hunger strike starting immediately.

The Highway 9 chose to break the injunction knowing the cost. They willingly gave up their freedom because they know that by not acting, the consequences will be much, much worse. They knew they would face prison when they took action, but they would not stand by while the government betrays the general public on the climate emergency.

Several of the nine are part of the Extinction Rebellion family. Together, we have all built this movement with them and we owe much of our success to their dedication and courage.

Emma Smart of the Highway 9, said: “Our government is betraying us; betraying our vulnerable people and betraying our children’s future. I believe that my intentions are morally right, even if my actions are deemed legally wrong.

“This court may see me as being on the wrong side of the law, but in my heart I know I am on the right side of history. I will not be a bystander.”

“Whilst acknowledging the importance of the courts, I have continued to break the injunction multiple times for we have a duty to the earth, to life, to future generations, to care and protect, this is the most important function of government, society and law. As we enter into the difficult years shifting to low carbon, and feeling the effects of climate change, we all need to be engaged in peaceful transformation; attempts to punish and crack down on peaceful protest opens the door to violent protest which i deeply wish to avoid, and all my protest for change strains for change to avoid conflict and societal breakdown and to protect life.”

Tim Speers of the Highway 9, said: “Never before has a civilisation had the burden and the privilege to see it’s own collapse coming. And in this world, those trying to avert catastrophe are vilified and criminalized, and those profiting from death are protected and rewarded.

“We asked for a chance to live. That’s all.

“And we did so in the tradition of nonviolent protest upon which this country was built. In response, the government declared it would do “everything we can to stop them.”

“In an insane world, the sane will be seen as insane. And in a democracy steeped in lies and corruption, good people have a duty to disobey bad laws. We did our duty, and I await the day when a judge in a court of law is brave enough to do theirs.”

By imprisoning them, the government shows its true cowardice. Following the diabolical failure of COP26 which ended only days ago, this sentencing is further evidence that those in power would rather silence those trying to bring about urgent change than face up to the reality we are in and act themselves.

As Insulate Britain spokesperson, Tracey Mallaghan, said outside the court, “To the government we say, you can’t imprison a flood, you can’t give an unlimited fine to a famine and you can’t bankrupt a fire. And to the public we say, no one is coming to save you”.

This ruling affects us all. As the climate and ecological emergency becomes a part of everyday life, and it becomes abundantly clear no one is coming to save us, we either take a stand now and be counted, or we face annihilation of all that we know and love.

We have reached the point where the problem can not be ignored, the argument for urgent action is won. So, as the fallout from COP26 begins, we must take a stand, we must rise up, we must go into resistance.

What will you do?