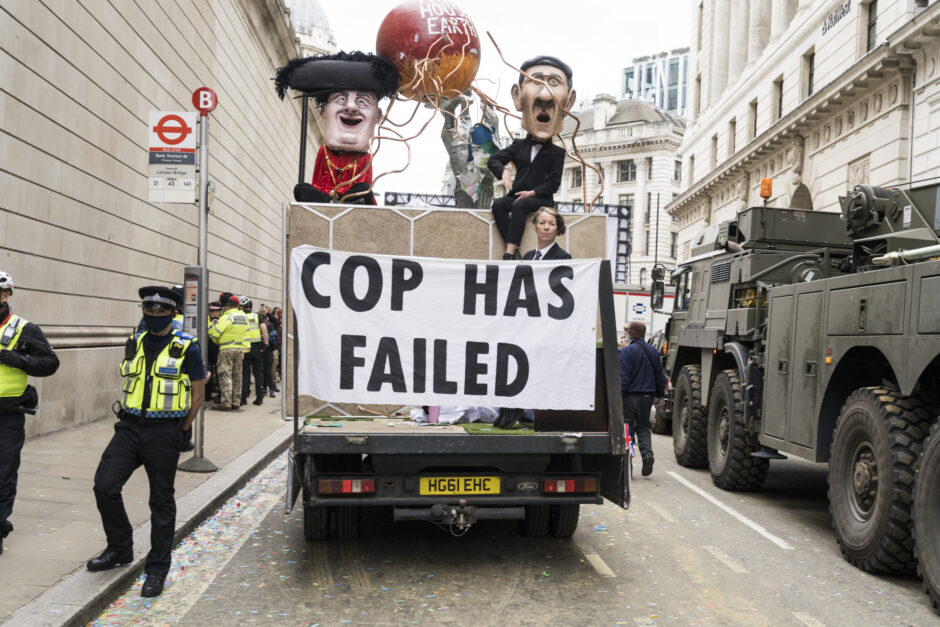 BREAKING: At 12pm today, Extinction Rebellion disrupted the Lord Mayor’s show in the City of London – the heart of fossil fuel investment in the UK – and several other locations along the parade. Riding a float entered into the show under the company name of the London Physical Society, Extinction Rebellion declared that COP26 had failed, and demanded the City of London take responsibility for their part in the climate and nature emergency by ending all fossil fuel investments immediately.

The float, disguised as an organisation dedicated to promoting the use of sustainable building materials, revealed itself at Bank Junction, where it displayed a giant drowning head and two outstretched arms reaching towards a large globe atop a structure made from mycelium based building blocks. On the sides of the float hung large banners saying ‘COP HAS FAILED’ and ‘STOP FOSSIL FUEL FUNDING’. People dressed up with giant heads depicting Rishi Sunak and Boris Johnson addressed the crowds and began smashing the globe, with others locking themselves together to block the road in front of the Lord Mayor’s stands.

Further along the march route a group of children were stopped by police from delivering the Children’s Charter to the Lord Mayor, hours after the Oath of Allegiance. The Charter read, “We stand here the day after COP26, which has failed to bring about the action necessary to tackle the climate and ecological emergency, to call on you to prioritise the next seven generations above the short term greed that focuses on wealth accumulation right here in the City of London.” [1]

The Children’s Charter called for the City of London Corporation to tell the truth by declaring a climate and ecological emergency, to Act Now to protect the next seven generations by stopping the funding of all new fossil fuel projects immediately, and to facilitate the Upgrade of Democracy by calling for the government to implement a binding Citizens’ Assembly. They asked if the Lord Mayor accepted the demands then to reroute the parade to march on Parliament with them.

Miranda Duncombe, mother and member of XR Families, said: “COP has failed to deliver the transformative changes needed to keep us at 1.5 degrees of warming, a complete betrayal of our children. If the City of London was a country, it would be the 9th largest emitter in the world. The City’s banks and asset managers provide loans and investments for the projects and companies that are killing us.

“I am here for my children’s future. Our government has failed to act to protect them. I’m calling for the city of London to divest from fossil fuels immediately for the children everywhere who are dying due to the climate crisis and those who will die in the future.”

The action comes the day COP26 draws to a close, which scientists, activists, policymakers and politicians alike, are calling a catastrophic failure.[2] The summit failed to deliver the necessary action to keep temperatures below 1.5 degrees, with pledges from nations still taking the world to 2.4 degrees of warming, pledges which involve technological fixes that have not yet been invented.[3] With no agreement to stop new fossil fuel investments – widely considered the most vital course of immediate action to stop making the situation worse – and the fossil fuel lobby having the largest delegation at the summit, it is clear that world leaders are making an active choice to take us over the cliff edge.[4]

Tim Crosland, founder of Plan B, said: “Instead of global emissions being slashed by 45% by 2030, which might keep 1.5˚C alive, COP26 keeps emissions rising by 13.7% by 2030. That is total failure – the greatest failure in our history – which will leave whole countries and regions of the world uninhabitable. Nansen passports will need to be reintroduced for all those made stateless.

“Why have our governments failed their most basic responsibility to protect their people? It’s not because they’re evil. It’s because they’re addicts: addicted to fossil fuels and the short term profits and economic growth they provide. We need to face up to that now and reclaim our democracy. If we’re to survive, we must rise up together and get on to the streets in our masses to refashion our political economy so that it meets the needs of all of us without destroying the ecosystems that sustain us and all life.”

The institutions represented in the Lord Mayor’s Show have played a pivotal role in shaping London, the UK, and global affairs for centuries. Climate change is already impacting many countries around the world and closer to home, scientists now tell us that climatic change will put much of London under water over the coming decades, including the Tower of London within 30 years.[5] The Lord Mayor and those on the parade have the opportunity to use their power and wisdom to face this challenge head on, and demonstrate leadership by supporting the rapid establishment of a Citizen’s Assembly to identify robust measures to tackle our climate emergency. Or they can collectively stick their heads in the sand and ignore the global catastrophes heading our way.

Bhavini Patel of XR Unify, said: “COP26 failed to understand the importance of acting immediately to stop fossil fuel financing. And every point counts. Talking about meeting 1.5 is already a death sentence for people in the global south, for families like mine in India where their village is at risk of being completely wiped out. Billions of people will face death or displacement in the coming years with these proposed agreements from COP26. This is nothing short of criminal.

“Let’s face it, even the fight for 1.5 from leaders now looks like it was a lie, they never had any intention of meeting it. We the people must be the leaders now. Whilst governments across the globe are in bed with the very corporations causing the harm, we will not see change that is vital and necessary. So, I say to everyone now to take to the streets and rebel for life. Our governments are not going to protect us.”

Gail Bradbrook, co-founder of Extinction Rebellion, said: “The people of the world, especially young people and exploited communities, have yet again been betrayed by our so-called leaders. We invite all people to join us, however they can, in rebellions against governments and others who are propping up an economic system that is destroying life on earth. No one is coming to save us except ourselves. The earth knows how to heal and be in harmony, and so do we.”

The march also involved disruption at St Paul’s Cathedral, where Christian Climate Action held a “questionable blessing”, pouring fake oil over themselves today in protest at the City of London prioritising profit from fossil fuels over the future of children. Further along the line, people also dressed as eco-criminals headed to prison, followed by samba bands drumming for climate justice at Carey Street. The disruption concluded with the Extinction Rebellion march, which began at Lincoln Inn Fields earlier in the day, arriving at Victoria Embankment with people blocking the road under a huge banner that read ‘CHANGE IS NOW’, and joined by a large string quartet.[6]

COP26 failure is a crime against humanity. It’s time to rebel for life.

[5] World Heritage sites to go under water due to climate change: https://news.sky.com/story/climate-change-projection-shows-buckingham-palace-and-other-world-sites-surrounded-by-water-12431537