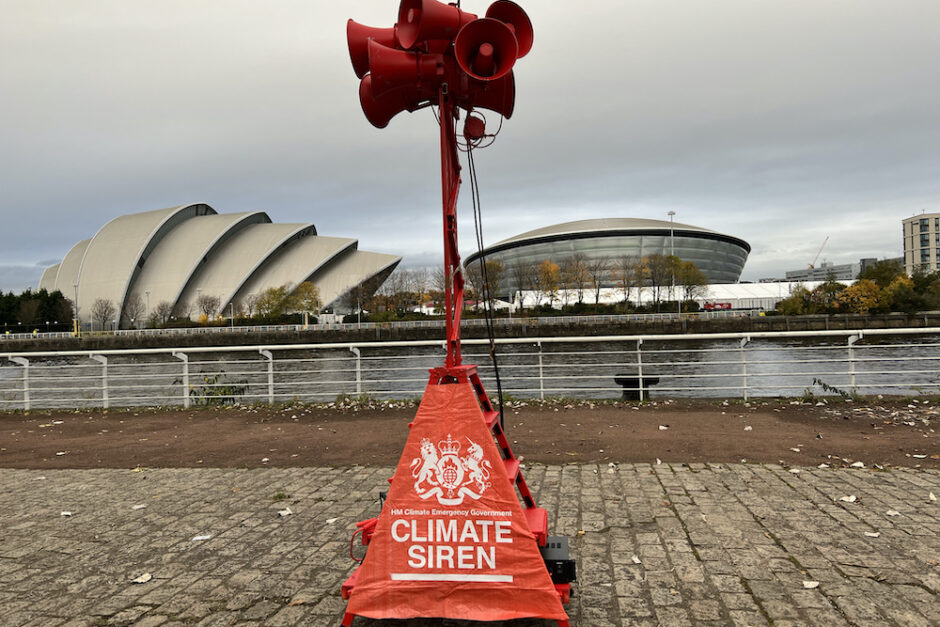 Extinction Rebellion and Climate Call-Up today sounded a “Climate Siren” in Glasgow, opposite the COP’s main centre where the high-level negotiations are concluding.

Inspired by wartime emergency sirens, the Climate Siren is a spectacular and powerful symbol, designed to remind political leaders that we face an existential emergency, which requires WW2-scale mobilisation and urgency.

Instead, COP has seen utterly inadequate progress that tiptoes around corporate interests and appeases the fossil fuel lobby. According to Climate Action Tracker, commitments so far still mean we face a catastrophic 2.4C global heating by the end of the century.

COP26’s failure points to the need for a radical change of gear, a shift into emergency mode where all the world’s resources are directed at the climate crisis, and fossil fuels are phased out, not invited in.

The Climate Siren is built from 8 loudspeakers rigged up in a 360 degree configuration, with a battery-powered amplifier, standing 8ft tall. It was first tested in London back in October rigged up to a billboard in Shepherd’s Bush. It is intended to provide a powerful auditory symbol of the climate emergency, enabling citizens and climate movements around the world to make themselves heard by political and corporate leaders behind their security cordons.

For the past week, people around the world have voted to sound the Climate Siren online, to have their alarm clearly expressed at COP26, which has been called the most exclusive COP ever, sidelining civil society and activists.

The Siren is a Climate Call-Up project, deployed in collaboration with Extinction Rebellion for COP26.

Ben Carey, from Climate Call-Up, said: “This COP packed with fossil fuel lobbyists should be a wake-up call to citizens everywhere, especially those who have trusted politicians to deliver. The Climate Siren dramatises the dire peril we are in. We all need to radically step up pressure on governments. If we don’t, we’ll be hearing much louder and more regular sirens in our future, as the climate crisis hits humanity with full force.”

Climate Call-Up is a new protest movement calling for wartime-level mobilisation, which would involve urgent and mandatory action by governments to phase out fossil fuels, and an immediate marshalling of all society’s resources to halt climate change. It aims to mobilise a new wave of climate-concerned citizens, deeply worried about recent extreme weather events. People are invited to join in an evolving range of actions on www.climatecallup.org, which aim to be widely accessible yet effective.

Links:
What Emergency? | |This Is Not A Drill: An Extinction Rebellion Handbook