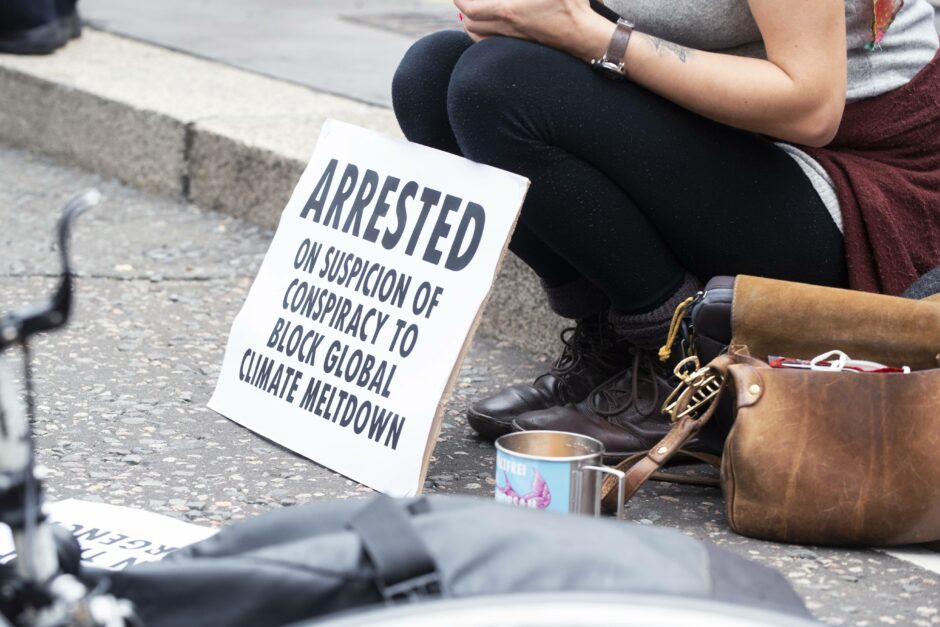 WEBINAR: Highway 9 facing jail – Why it’s time to step up and engage in civil disobedience

On the 16th of November, 9 nonviolent protesters will be sentenced to up to two years in prison for breaking an injunction on protesting on the M25 with Insulate Britain. They are part of a group of over thirty who could face similar sentences over the coming months.

As we watch COP26 fail to deliver, now is the moment to speak up, to stand together, and to proudly defend the right and the need to have disruptive disobedience as part of a thriving healthy democracy. As a means to create the change we need to protect people and societies from the crisis which threatens all life on earth.

We will hear from a panel with experience of taking civil disobedience on why this is the moment for us all to step up.

Clare Farrell – Clare is a co-founder of Extinction Rebellion and now coordinates the movement’s media team. She took part in a women’s action highlighting HSBC’s role in the climate crisis earlier this year and faces jail time for her civil disobedience.

Roman Paluch-Machnik, Roman has been organising with Extinction Rebellion since 2018. This year he travelled the country, running people’s assemblies in neglected communities to understand what we’re worried about and what we have in common as a nation. He is also part of Insulate Britain and one of the Highway 9 facing jail time.

Angie Zelter – Angie is an activist who has initiated and participated in numerous campaigns against nuclear weapons, militarisation, deforestation and human rights abuses. As a global citizen expressing solidarity she has often been arrested and incarcerated for many months in different countries and is the author of 6 books, the latest of which is called ‘Activism for Life’

Frank Hewetson – Frank has been an Action Coordinator with Greenpeace for the last 30 years. He is based in London and has worked on pretty much every GP campaign and across the Globe. He’s 56 years old, has two children, a long criminal record, and is banned from three countries and doesn’t really regret a moment of it especially as we are now at such a truly critical juncture.

Orla Murphy – Orla is a 20-year-old Irish climate activist who dropped out of college and was sent to prison for her protest against the Irish government’s inaction on the climate emergency.

Register in advance for this webinar: https://zoom.us/webinar/register/WN_JOniiVHxQSiQmqh9JJ_D3A