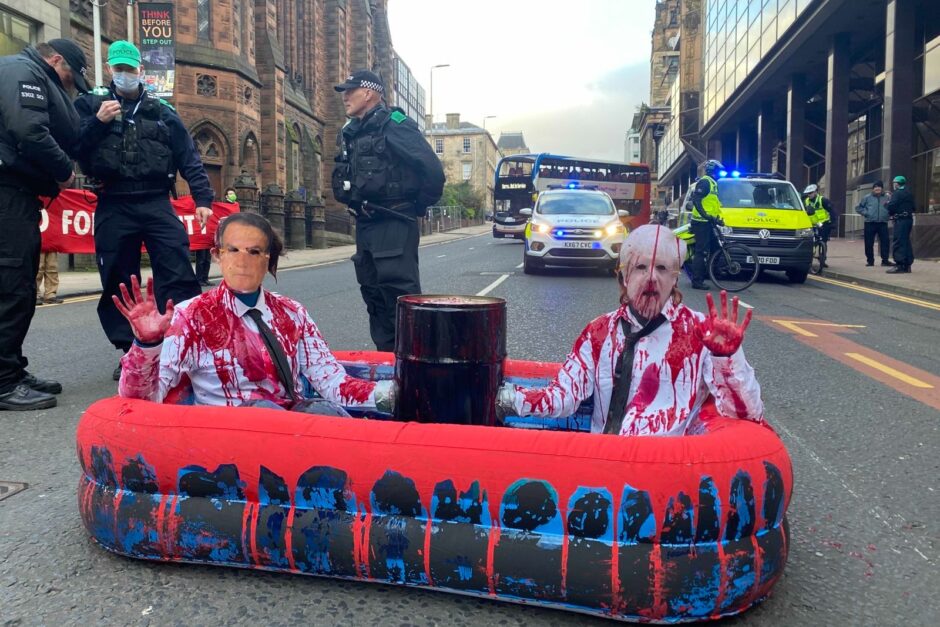 Following this morning’s collaboration and the global call of action from APIB (Articulation of Indigenous Peoples of Brazil) Extinction Rebellion is acting in solidarity to put a stop to investment in deforestation and land grabbing. The group held a protest in front of the St Vincent Street branch of Santander in Glasgow to denounce the Bank’s criminal complicity in the destruction of the Amazon rainforest and the climate emergency. Two members of the group lay in a ‘bloodbath’ to symbolise the destructive impacts of Santander’s investments. The group help banners reading ‘SANTANDER = BLOOD MONEY’ and ‘DEFUND DEFORESTATION, HONOUR OUR ENVIRONMENTAL DEBTS’. Others sprayed ‘blood money’ and ‘protect Amazon’ on the front of the building.

According to a 2019 Amazon Watch report titled ‘Complicity in Destruction II’ as the world’s largest rainforest, the Amazon provides 20% of our oxygen, houses 10% of the planet’s biodiversity, and helps stabilize the global climate. The world needs it to survive. None understand this better than the indigenous peoples and traditional communities who call it home, and are proven to be its best stewards.

In the last two years deforestation has damaged the Amazon so badly that two large research studies recently found that it is emitting more greenhouse gases than it can store. This is a terrifying indication that we could soon lose the world’s largest carbon sink, which could tip us into a full-blown climate catastrophe.

The Complicity in Destruction II report shows that Santander is the second largest US or EU bank involved in providing credit for the major Brazilian beef exporters. [1]

Sonia Guajajara, Executive Coordinator of APIB, said: “It is necessary to denounce to the world that Bolsonaro is not only a threat to Brazilians. He is a global threat because of his policies of destruction. We, the indigenous peoples, continue to fight against a genocide and an ongoing ecocide. But that struggle cannot be only of indigenous peoples, it must be everyone’s struggle. We are making complaints in all international instances, including before the International Criminal Court. At Cop26 we are here to affirm that there are no solutions for the climate crisis without indigenous peoples and our territories.”