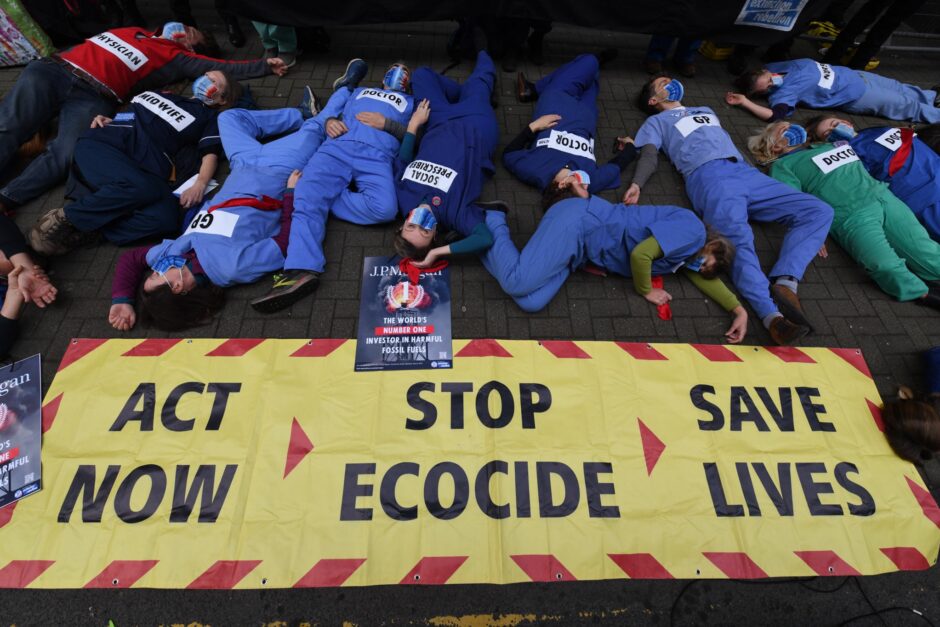 At 9am this morning, Doctors for Extinction Rebellion staged a ‘die in’ outside JP Morgan
on Waterloo Street, Glasgow, whilst holding banners that say ‘Cause of Death: Fossil Fuel
Finance’ and ‘JP Morgan: World’s leading investor in fossil fuels’.

They read out a letter to CEO Jamie Dimon calling for JP Morgan Chase [1] to refuse
finance to companies who continue to plan new fossil fuel projects and to align with the
‘Net Zero by 2050’ framework produced by the International Energy Agency. Then they will
join the Climate Strike march led by Fridays for Future at 11am nearby.

This is the sixth time the group have protested at JP Morgan in the past 2 months, 5 at
Canary Wharf where 2 were arrested in September [2], and now in Glasgow. Their
campaign is ongoing until JPMorgan meet the demands of their letter. This is also the 4th
time that protests have occurred outside JP Morgan in Scotland since the start of COP26.

Charlotte Cameron, a registered midwife from Aberdeen, said: “Rising temperatures are
already contributing to increased rates of preterm birth and stillbirth. Babies are being born
into extreme-weather induced famine, facing malnutrition and death. This isn’t some far off
future, it is happening in Madagascar. If we don’t stop burning fossil fuels, vulnerable
regions will increasingly suffer a similar fate. How many more babies are going to
needlessly die while companies like JP Morgan prioritise profit?”

Dr Christianne Guillotte, a GP trainee from London, said: “It is becoming increasingly
difficult to reconcile spending time treating individual patients whilst the climate crisis,
which will profoundly impact every child born today, progresses almost unchecked. I have
a duty of care to protect my patients, and as have to speak up against banks like JP
Morgan who are amplifying the damage.”

Dr Daniel Fitzgerald, a medical doctor from North Fife, said: “We will not reach safe
temperature limits if we continue the slow incremental change displayed by JP Morgan.
Even though, at a late stage, they joined the Net Zero Banking Alliance, they still finance
new fossil fuel projects. It is vital for our health that companies like JPMorgan take their fair
share of responsibility for the climate crisis, rather than waiting for others to do so in the
name of ‘pragmatism”

About Doctors for Extinction Rebellion

Doctors for Extinction Rebellion is a health professional collective who, appreciating that
climate change is an impending public health catastrophe, have decided to support and
undertake civil disobedience with Extinction Rebellion worldwide. We are doctors, nurses,
occupational therapists, physiotherapists, paramedics, midwives and other allied health
professionals.

JP Morgan Glasgow employs around 2,000 technologists, and provides software
development facilities to the firm and its clients.

Doctors for Extinction Rebellion is supported by:

Other protests by Doctors XR at JP Morgan at Canary Wharf, London

Protests at JP Morgan in Scotland by other XR groups during COP26:

Some of the health professionals attending: