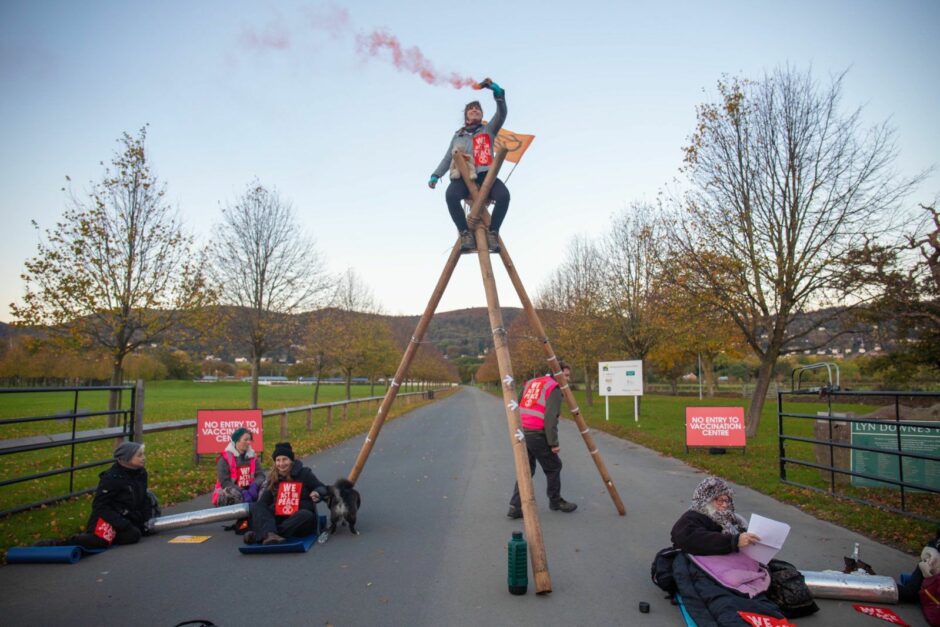 BREAKING: Extinction Rebellion protesters have blocked an arms fair at the Three Counties Showground in Malvern Worcestershire. Four gates have been blocked by protestors sitting on top of bamboo structures.

Addie May Swarbrick Schwarz, a 30 year-old vegan chef, has taken time off work to perch on one of the uncomfortable bamboo structures at the entrance to the showground: “I’m here today to call out the military’s role in fuelling the climate crisis. Every year, Britain’s military-industrial sector emits more greenhouse gasses than 60 individual countries. [1] Our machines of war are destroying people and planet at the same time.”

The arms fair protest in Malvern is part of a series of actions taking place in Glasgow and across the world during the COP26 climate summit. Later today, Extinction Rebellion activists in Glasgow will also be marching to the Scottish headquarters of BAE Systems, one of the corporations exhibiting at the Three Counties. [2] Leading climate scientists have urgently called on world leaders at the summit to commit to reductions in the global carbon emissions which are causing the climate emergency. [3]

3CDSE Defence and Security Expo at the Showground is an annual gathering for military and security firms to sell weapons and technology. Corporations present at the fair include BAE Elbit Systems, Thales and Lockheed Martin, who have all been linked to human rights risks by Amnesty International. [4]

Extinction Rebellion say that military emissions are seldom highlighted in discussions about the climate emergency. While world military spending rose to almost $2 trillion in 2020, funding for renewable technologies was only one-quarter of that. [5] “Our priorities are completely wrong. We are facing a climate crisis that steals the future for all life, yet we continue to pour our money into these weapons of destruction. We’re here to tell the UK public the truth about these arms fairs and these grave consequences of the arms trade.” Schwarz said.

Speaking in support of the action Dr Kathryn Gilbert, retired Professor of International Management, said: “Poorer countries suffer a huge injustice in climate and conflict. Of the 25 countries most vulnerable to climate change, 14 are suffering military conflicts. [6] Sadly, in many cases, the weapons in those conflicts were manufactured by UK corporations. The climate and ecological emergency is a crime against humanity perpetrated by the rich and powerful against the poor and vulnerable.”

Jessica Hunt, a 52 year-old veterinary doctor, is laying on the ground with her arm locked into a heavy concrete structure blocking the showground entrance.: “The struggle to control countries with oil reserves has led to at least 25% of all wars in the last 50 years,’ she said. [7] ‘Fossil fuels are doing more than destroying our climate– the fight over them is also causing destructive conflicts. If we stop burning fossil fuels, we can stop climate breakdown while building a more sustainable energy system that does not rely on military battles abroad.”

The atmosphere outside the arms fair is positive, with popular peace songs playing at each of the four blockaded gates while colourful banners reading ‘Emissions of Mass Destruction’ flapped in the chilly wind. Food and hot drinks are being shared and some are dancing to a samba band. Extinction Rebellion point out that most of those taking part in the blockade are women and FINT (Female, Non-Binary, Intersex) protestors. As she shifts on top of her bamboo perch, Schwarz explains “Both war and climate change disproportionately affect women. We are taking direct action today in support of the women across the world who are demanding an end to armed conflict and an end to the carbon emissions which are leading to climate breakdown.”

A wide range of other groups are also at the blockade and voicing their opposition to the arms fair, including Three Counties Campaign Against the Arms Trade (CAAT), Malvern Individuals for Peace, Peace Pledge Union, The Stroud Red Band, Extinction Rebellion Malvern, XR Peace, and Trident Ploughshares.

There is also an Extinction Rebellion blockade happening simultaneously at Schlumberger Research Centre in Cambridge.