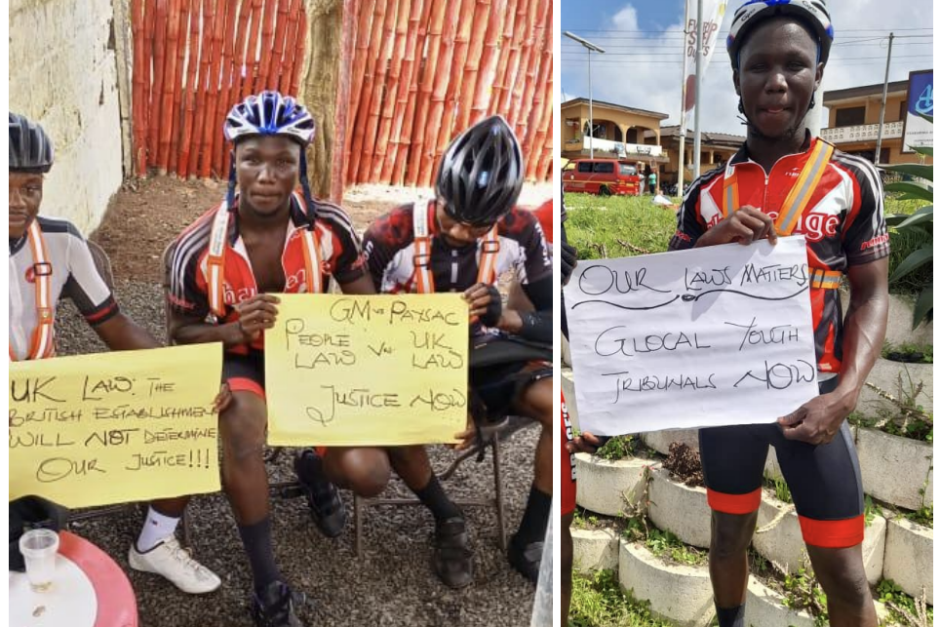 Young XR and Plan B activist lost in action in Ghana

A young climate and anti-colonial activist, Elorm Dade, aged 23 has been killed on the road in Accra, Ghana. Elorm was hit by a lorry while on a bicycle on 24 October and died at the scene. Given the context, friends and family consider his death to be suspicious and are calling for a full and independent investigation.

Elorm was a fearless activist with the XR Affinity All-Afrikan Network (XRAAAN), resisting the extractivist and exploitative policies of the Governments of Ghana and the UK, which are devastating lands and communities across Afrika and elsewhere. It is understood he was killed while gathering testimony in support of Global Majority Vs’ WeAreWitness campaign, which runs in parallel to the legal action brought against the UK Government by three young British activists in collaboration with Plan B and the Stop The Maangamizi campaign. The legal action alleges that the UK Government is violating its obligations to safeguard the rights to life and to family life by failing to take practical and effective measures, domestically and internationally, to limit warming to 1.5˚C, in accordance with the Paris Agreement.

The UN Human Rights Chief, Michelle Bachelet, has referred to the climate crisis as “the greatest ever threat to human rights”, both on account of the impacts of the crisis itself, and the retribution from governments and others against those standing up in resistance.

Kafui Yao Dade, Elder Brother of Elorm Koku Dade, on behalf of their Family, said: “Elorm was one of the most passionately Mother Earth loving, energetically daring and beautifully promising flowering buds in our family now painfully nipped in the bud! We of his family and indigenous Ewe Community of the Gbetowo, alongside his XRAAAN Colleagues and wider circles of friends, including those Youth Eagle Riders of the Gasosusu Cycling Team of Sustainable Transport campaigners he founded and led, demand nothing less than true Justice for the heinous crime of his tragic killing in suspicious circumstances. For this reason, we as his family, on behalf of our indigenous Gbetowo Nation in and beyond Ghana, welcome this very consoling, morale boosting and determination strengthening International Community support for our Elorm Justice Quest from Plan B, Stop the Maangamizi Campaign and the Global Majority Versus Campaign.”

Mawuse Yao Agorkor, XRAAAN International Coordinator-General, Accra, Ghana; on behalf of the XR Affinity All-Afrikan Network (XRAAAN), said: “XRAAAN and all our entire networks of Global South Communities of Resistance Activists, involved in building affinity with Extinction Rebellion, through XRISN have, with Elorm, shockingly lost one of our hardest working, exemplarily conscientious and bravely daring Pan-Afrikan Youth Eco-Warrior Defenders of Miano Asase Yaa Mother Earth! This exceedingly hurtful pain of a terrible blow cannot be adequately expressed in words. Suffice it now to say our Elorm Justice Quest, in the revolutionary Law-As-Resistance spirit which energised him, also as a GMVs-PAYSAC Squadron Leader of the Gasosusu Cyclists Team associated with the Eagle Riders Club, is hereby galvanized by growing Internationalist Solidarity; and it is with such a dynamic power of Unifying People-to-Peoples’ Internationalism that we are determined to ensure the suspicions engulfing his cruel killing are properly investigated and cleared up transparently for the entire World to see true Justice done even here in present-day Ghana; in order to enable his dearly beloved Pan-Afrikan Freedomfighting Youth, indigenous Gbetowo Communities of Resistance and other Global Majority progressive Changemaking forces throughout Afrika and the World to win the Planet Repairs of Global Justice for all to which he had, even so young, seriously committed himself and sacrificed so much for.”

Jerry Kobina Amokwandoh, a co-coordinator of the Global Majority Vs. (GMvs) Campaign said: “Global Majority Vs is treating the death of our Br. Elorm as suspicious. His death follows the GMvs Squad Action in Accra protesting the UK Government’s justification of the violence, exploitation, destruction, genocide and ecocide of Afrika supported by the UK Courts. We act fully knowing this system, and particularly the governments of its puppet regimes have  led to the deaths of investigative journalists and activists such as Ahmed Souale, Kaaka Mohammed and others. We hold up the importance of Brother Elorm’s efforts to transform the minds of his peers and act in support of grassroots mobilisation to challenge the corruption of foreign exploitation in Ghana and Afrika. In the forming of a GMvs Squad and GMvs Pan Afrikan Youth Support Action Command member, Br. Elorm represented a threat to the system and the relationship that Global Britain is trying to build with Ghana.”

Tim Crosland, Director of Plan B, said: “We mourn the tragic death of Elorm Dade, a courageous young activist standing up for his people and for life on earth. Our hearts go out to his family and friends. He was in the process of gathering testimony regarding the impacts on his land and people of the extractivist policies supported by UK financiers and others. We know that climate activists and land defenders face persecution and murder for holding governments and their corporate sponsors to account for their crimes. Plan B supports the call for a full and independent investigation into his death.”

Miriam Kothele for the GMvs-Pan Afrikan Youth Support Action Command, said: “This looks like the terrible ‘business-as-usual’ in neocolonies sponsored by the UK. Standing up for the right to life is made an offence by the ruling minority. This is not the law of our justice of the Majority World.

“Elorm fights for freedom, and fights for us, and a better world. He is a bold and a daring inspiration for the rising up of all Afrikan peoples and those who want a better world, challenging the system everywhere, calling out the roots of exploitation, harm, impoverishment, pollution.

“But the loss of our lives continues to be legitimised by bad government and misrule of unjust law. So there is no justice until there is justice for all.”

Clare Farrell, cofounder of Extinction Rebellion (UK) said: “Extinction Rebellion sends love and solidarity to the family and colleagues of brother Elorm, as a member of our global family of collective resistance. We will share this moment with our community, whilst the world’s minds are focussed on the climate and ecological emergency and the injustice of that which we are all fighting. To remind each other that we are part of a collective struggle generations long, and spanning the world over with earth defenders on all continents with whom we act in solidarity.”

There will be a simultaneous vigil on 10 November in Brixton and Glasgow (where COP26 is being hosted) to celebrate the memory of Ken Saro-Wiwa, brother Elorm and all other sheroes and heroes lost as earth defenders in resistance to these murderous regimes across the world.

Plan B, Global Majority Vs, and XR (including XRAAAN, XRISN and XR UK) will dedicate the #WeAreWitness campaign, which documents the ongoing violence of neocolonial policy around the world, to the memory of brother Elorm (#ElormJustice) and do all that is necessary to secure justice for his family and for all. Global Majority Vs. will be taking up this case with the Ghana High commission and the All Party Parliamentary Group on Human Rights of the British Houses of Parliament.