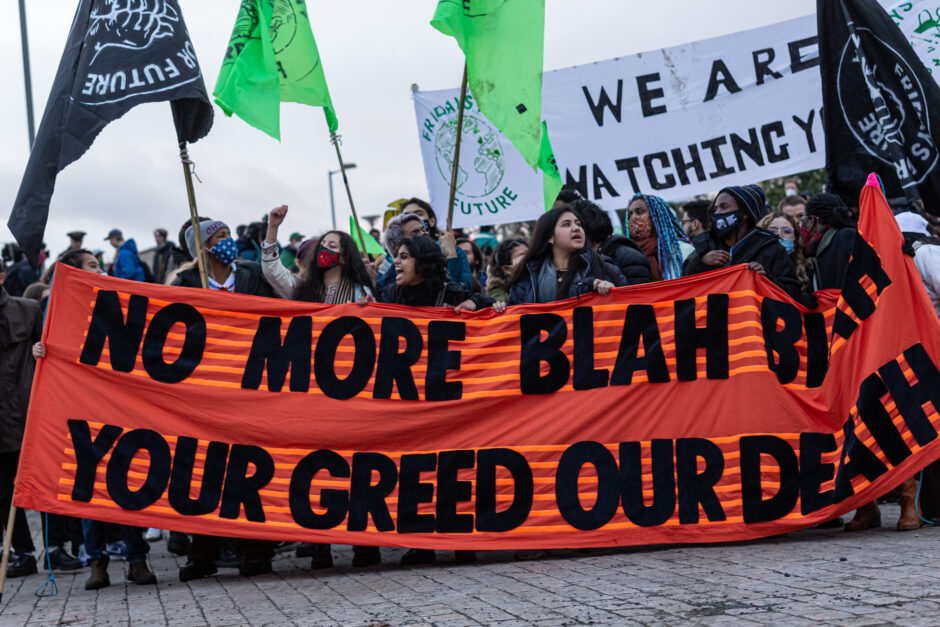 Thousands of protesters will march through Glasgow on Wednesday, 3 November to confront the threat of greenwashing. They will accuse COP26 sponsors of covering up their destructive habits with this PR trick while corrupting climate negotiations and endangering life on Earth.

Extinction Rebellion, other environmental groups and concerned members of the public will take to the streets with banners bearing messages for the governments and companies guilty of greenwashing. Led by samba drummers and dressed in green, they will march from the Buchanan Gallery, meeting on the steps at 12 pm.

Attending the march, Extinction Rebellion activist Helen Smith, 34, from Glasgow, said: “I’m so tired of the number of companies profiting from a disingenuous perception of themselves as ‘ethical’ or ‘green’ when the reality is totally the opposite. It makes us all sceptical of genuine green claims at a time when this action is more important than ever. I’m marching to take a stand against all companies harming the planet while offering inexcusably skewed perceptions of themselves for the benefit of their own brand image. And to call to our government to improve regulation to make misguiding the public illegal.”

COP26 sponsors include companies such as Google and the National Grid, each of whom claims they are responding to climate change while continuing to pollute and destroy.

Google said it achieved carbon neutrality in 2007 despite having emitted 20 million tonnes of carbon since then – the equivalent of 10 million cars driving for one year on gasoline. Meanwhile, the National Grid said it aims for net-zero by 2050, at the same time as its oil and gas facilities spew out greenhouse gas emissions ahead of the summit.

While multinational companies continue to profit from oil and gas, poorer countries in the Global South bear the brunt of the climate and ecological emergency despite contributing the least. The protesters stand in solidarity with these countries and call out greenwashers for their suffering.

Speaking at the march, Rob Callander, 31, based in London and born in Japan, of climate justice group Jubilee for Climate, said: “One day soon, all the blah blah blahs of greenwash will be used as evidence against those who knew the suffering climate change was causing – and would cause – and still used their creativity to prevent action. There is no place for corporations, governments or individuals who behave this way – exposing their lies is just the beginning. Justice demands that we use their wealth and assets to repair the damage they have done.”

Governments around the world have a duty of care to protect the lives and well-being of their citizens. They are failing. Because of this failure,  the rich and powerful countries within the COP process cause crimes against humanity.

COP1 was set up by the UN to deal with climate change in 1995.  Since then, there have been 25 meetings. After nearly 40 years of warnings and 30 years of international climate negotiations, carbon emissions from burning fossil fuels have increased by over 50% since 1990.

With every passing year, the warnings from nature grew ever more visceral and the warnings from science grow ever more urgent. We are now facing climate and ecological breakdown. 1 million animal and plant species are now threatened with extinction, many within decades, more than ever before in human history.

Extinction Rebellion activist Mike Grant, 61, retired from Rosewell, said: “After 25 years of climate negotiation, we’ve seen nothing more than a massive failure of governance at every level across the world. So I am acting today to make clear to those gathering for COP26 that the people demand far bolder and far faster action now. Every fraction of a degree avoided is a life, a town, a species saved somewhere in the world.”

To join the greenwash march meet at 12 pm on the steps of the Buchanan Gallery, central Glasgow. Find more information and the action pack in the Facebook event.

What is Greenwash?
“Greenwash”: activities by a company or an organisation that are intended to make people think that it is concerned about the environment, even if its real business actually harms the environment.
https://www.greenwash.earth/

Info on the threat of extinction: https://www.un.org/sustainabledevelopment/blog/2019/05/nature-decline-unprecedented-report/

What we risk without change: https://extinctionrebellion.uk/the-truth/the-emergency/part-5/#What-will-our-world-look-like-by-the-end-of-the-century