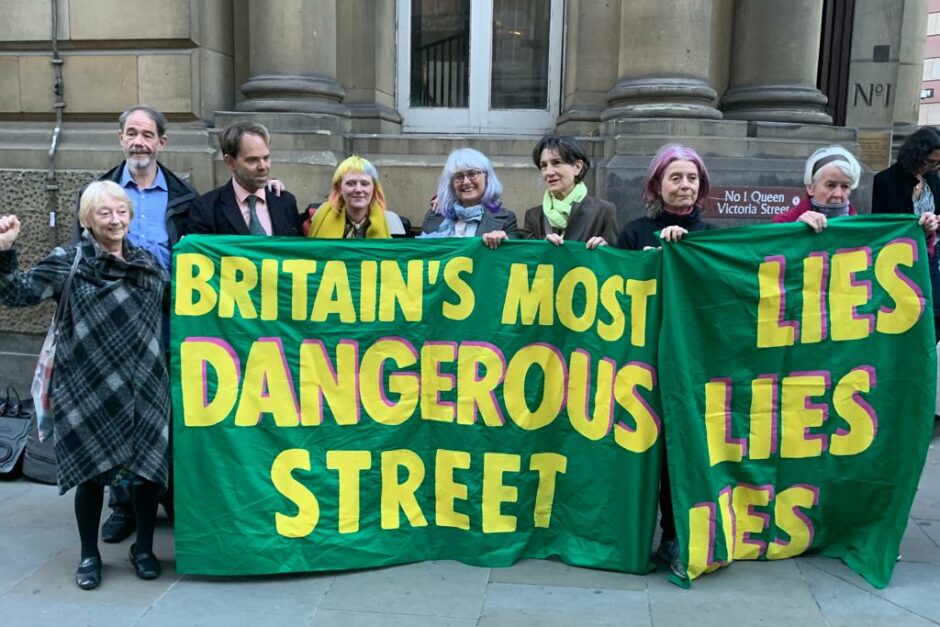 The Tufton Street 3 have been found guilty of criminal damage during an action outside the home of climate deniers The Global Warming Policy Foundation (now renamed Net Zero Watch).

Clare Farrell, Jessica Townsend and Rupert Read spray-chalked the word “Lies” onto the exterior of the building and poured fake blood down the steps of 55 Tufton Street during the action in September 2020.

Delivering their unusual sentence, – the minimal permissible – the panel of three magistrates at City of London Magistrates Court praised the trio for their “openness amd honesty”.

Author and campaigner Jonathan Porritt, who attended the trial, said: “This is a disappointing outcome but not unexpected. It doesn’t make the Global Policy Warming Foundation any less of a bunch of chronic liars.”

Actress and author Harriet Walter, who was also at the court in support said: “The wrong crime was on trial. Which is the greater crime? Reversible damage to a bit of property or landing our children and grandchildren with irreversible damage to the planet.”

Solicitor Raj Chada of HJA said: “Surely yet again, the CPS needs to consider whether it is in the public interest to prosecute when these are the sentences imposed.”

Jessica Townsend, co-founder of Writers Rebel, which organised the Tufton Street action, said: “It’s my first time in the dock and it was surprisingly daunting. But I could feel the magistrates emotionally engage. Rupert and Clare gave towering speeches.”