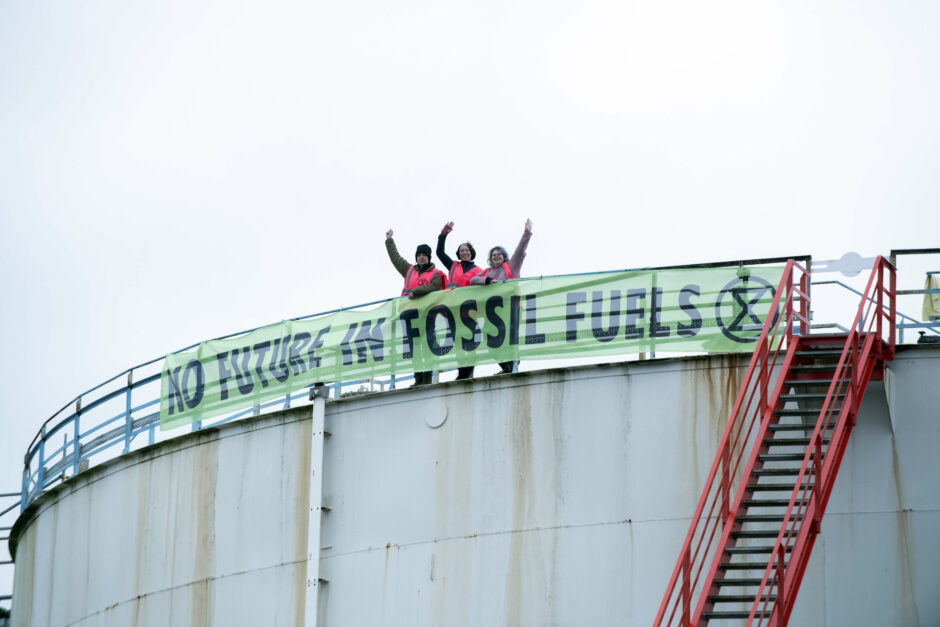 Around 15 Extinction Rebellion activists gained entry to the site early this morning, under cover of darkness, cutting the electrified perimeter fences surrounding the terminal and spreading across the site in small groups to lock on to structures across the site.

Seven of the protestors have scaled two 50 foot oil silos and unfurled two banners which read: “Climate Emergency” and “No Future in Fossil Fuels”.

They are also calling for Exxon Mobil to stop its major expansion plans at Fawley Oil Refinery. The refinery, owned by ExxonMobil subsidiary Esso Petroleum Company, is the UK’s largest oil refinery, supplying 20% of all UK fossil fuels.

Another group are at the entrance gates, including British Olympians Laura Baldwin and Etienne Stott, chained to a pink boat, The Beverley Geronimo, on a trailer, blockading the main entrance to the site.

Laura Baldwin, Olympic sailor, coach and environmental protector, said: “I am a deeply protective mother, moved to take direct action in a desperate bid to force this suicidal system to change in time to limit the climate crisis worsening and slipping past the point of no return. Watching the news this summer was horrifying and heartbreaking, witnessing catastrophic climate impacts killing people on every continent of the globe. That we, as taxpayers are actually funding, through subsidies, the toxic and deadly oil industry is beyond absurd and it must stop now.”

Etienne Stott, 42, Olympic Gold Medallist at London 2012,who lives in Nottingham, added: “I think it’s totally wrong that oil companies continue to put their profits ahead of everyone’s right to a future on a living planet. We need our government to rein in these rogue companies as a matter of urgency and show to the world ahead of COP26 that the U.K. is prepared to take a genuine leadership position.”

“Watching Joe Lycett’s documentary on Channel 4 this week made me realise just how dishonest these fossil fuel giants are being, and it motivated me to get onboard with this action today to continue to highlight the corruption and apply pressure where it’s needed.”

The protestors are demanding the government listens to what the general public want and take urgent action on the climate and ecological emergency. They point to mounting evidence the public want more radical action. This month the Climate Consensus, a survey of over 22,000 people across the UK, commissioned by Demos, revealed that between 77% and 94% of respondents back a carbon tax on polluting industries, higher levies on flying and grants for heat pumps to help tackle the climate crisis. A speed limit of 60mph on motorways and a campaign to reduce meat eating by 10% were also among the most popular measures.

A YouGov survey for Global Witness shows that more than two thirds (67%) of the British public across all sectors of the population, want to see the UK as world leader on climate change, with 65% wanting the Government to shift the subsidies it provides to domestic oil and gas companies to support the expansion of renewable energy and improve the energy efficiency of people’s homes. Only 7% opposed these measures.

Yet still the government turns a deaf ear to the electorate, with Chancellor Rishi Sunak’s Budget speech this week almost devoid of any reference to the climate crisis and, just four days before the UK hosts the crucial Cop26 climate summit, he announced the halving of taxes on domestic flights, which are already far cheaper and more polluting than trains, a £21bn in funding for roads, a paltry £1.5bn for public transport and the continued freeze on fossil fuel duty.

The Fawley activists are demanding the Government listen to the nation and raise the bar as the host of the Cop26 Climate Summit next week by announcing an immediate end to all fossil fuel investment, a move which would strengthen its hand in demanding radical action from world leaders.

Scientific evidence shows we are approaching the point of no return. Earlier this year UN secretary general, António Guterres warned that the recent IPCC report on the climate crisis is nothing less than “Code Red” for humanity. He added: “We are at the verge of the abyss.”

The International Energy Agency (IEA) has also warned that exploitation and development of new oil and gas fields and the building of coal-fired power stations must stop this year if the world is to stay within safe limits of global heating and meet the goal of net zero emissions by 2050.

The campaigners also condemn ExxonMobil’s massive expansion of its diesel production facilities at Fawley, despite the banning of all combustion powered vehicle sales by 2030, and the laying of a new, larger bore pipeline to supply Heathrow and other airports with ever greater quantities of fossil fuel, despite the unequivocal science that states we need to drastically reduce emissions.

Irrefutable evidence shows that ExxonMobil has known about the devastating effects of fossil fuel production on the environment for over 40 years, concluding in 1979 that it “will cause dramatic environmental effects” in the coming decades and saying “the potential problem is great and urgent”.

However, instead of acting responsibly on that knowledge, they’ve spent tens of millions funding climate denial and misinformation and obstructing a transition to cleaner energy sources. A senior ExxonMobil lobbyist recently admitted that the company was aggressively fighting against some of the science.

Activist Hannah Hunt, 22, a student and sailor from Brighton, warned: “We are speeding towards an unprecedented humanitarian crisis. The government must ban any new fossil fuel investment. Anything less and we fall off the cliff and condemn the next generation to the greatest level of suffering in human history and the greatest injustice. For the health of our planet, for the health of our children: science cannot be disputed, so now is the time to act.”

Jonathan Kennedy, 42, Mechanical Engineer, Sussex  said he had acted in fear for his children’s future. He said: “We have two young children. It breaks my heart to think how our collective failure to act on the climate crisis is going to impact their generation. The government’s action is not enough. I can’t stand by. I have to do what I can.”

It’s three days before COP26. Governments around the world have a duty of care to protect the lives and well-being of their citizens. They are failing.

COP1 was set-up by the UN to deal with climate change in 1995.  Since then, there have been 25 meetings. After nearly 40 years of warnings and 30 years of international climate negotiations, carbon emissions from burning fossil fuels have increased by over 50% since 1990. Meanwhile fossil fuels are subsidised at $11m a minute. Now we are at COP26 and we need action.

Emissions are still rising. In fact they are rising so much that it’s predicted that instead of 1.5°C we are on a path to 3.2°C increase this century. The world is going to become a terrifying, dangerous place  if we reach  3.2°C of heating.

We are already facing climate and ecological breakdown. One million animal and plant species are now threatened with extinction. People, principally those in the Global South who have done the least to create the damage are suffering and dying today and at COP26 their voices must be heard.

Sweeping changes are needed to the nature of our economy, the form of democracy, and the way we share our planet. The UK Climate Assembly showed that citizens will step up to make the tough decisions necessary to move towards a greener, fairer world if they are enabled to do so. People want change.

But, before we begin to repair the damage, we need to stop making the crisis worse. There’s no time left to lose, aiming at net zero by 2050 will mean a death sentence for millions. Denial and greenwashing must cease.

Fawley refinery, the largest in the United Kingdom, produces 270,000 barrels of crude oil a day and supplies 20% of all UK fossil fuels. It has a multi-million pound expansion programme planned.

The refinery is owned by Esso Petroleum Company Limited, a subsidiary of Exxon Mobil Corporation who are investing a billion dollars to expand diesel production despite that all combustion powered vehicle sales will be banned in 2030.

A further development is the Southampton to Heathrow Pipeline (SLP) project replacing and expanding 90km of the underground aviation fuel pipeline. Flying cannot easily be decarbonised and the industry has no credible route to zero emissions. In fact, the UK plans to grow air traffic 60% by 2050 a completely unsustainable prospect – they fly, we die.

ExxonMobil knew about the overwhelming scientific consensus on man-made climate change from at least the mid-1960s, and responded by sponsoring climate science denial. This has enabled them to continue fossil fuel extraction despite knowing it causes mounting harm to people and planet. Their denial and greenwashing has continued ever since. And, as we act today, with love and humility, in defence of our beautiful planet, Exxon’s CEO is called to give testimony to the US Senate.

Listen to the People

The pink boat used to blockade the main gate at Fawley oil refinery is named after Beverly Geronimo, an activist murdered in the Phillipines. Beverly, 27, was an active member of the Tabing Guangan Farmers Association (TAGUAFA) and the Parents-Teachers’ Community Association (PTCA) of the Mindanao Interfaith Services Foundation Inc. (MISFI) Academy.

Since 2009, Beverly had experienced harassment, intimidation and coercion from soldiers present in their community. She was staunchly opposed large scale mining companies such as OZ Metals and Agusan Petroleum.