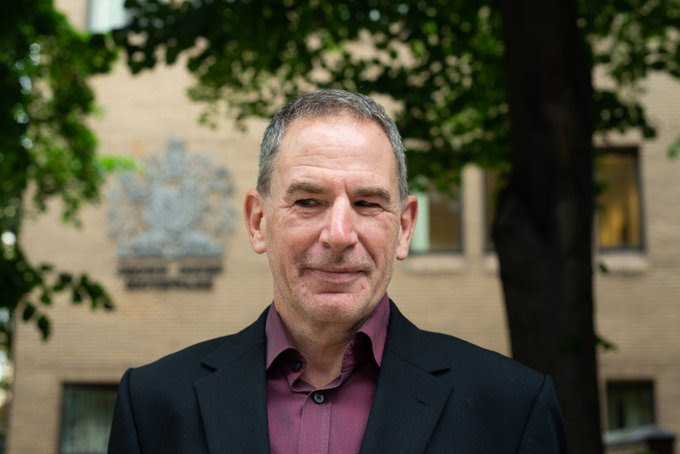 First of all I want to thank you for all of your loving support whether through birthday cards, emails, in person support outside the prison or the hard work that many are doing in the background. Before I say any more as well I want to stress that I recognise that my experience of prison is unique and that so many really struggle in here. I’m meeting others and hearing their stories and I cannot speak for them, only to say that their experiences are teaching me that our criminal injustice system disproportionately impacts the young and those who are non white.

I’m handling prison better than I thought, I have a wonderful roommate Steve and the ratio of laughter to tears in our cell is 100 to 1. I have time for reflection and planning ahead for the future. So far, I have received almost 600 emails and cards, 250 today alone! On the occasion of my 57th birthday. That’s probably more than I’ve had through my entire life. My reading is slow, which is a good thing in prison, and Steve is really helpful for reading small print and difficult handwriting. Being part of the XR community really helps so much when in prison. I’ve had visits from a yoga teacher and a member of the quaker community directly as a result of XR contacts and these individuals are providing practical support as well as encouragement. A number of staff have commented after encountering the wonderful XR Wandsworth supporters outside the prison and nurse Fifi tells me that she has danced with them on more than one occasion. One governor met the band on his way home and was inspired to return to meet me and report back to the supporters on my wellbeing. Our physical environment of stone brick, heavy steel and concrete is devoid of any nature except for a lone pigeon who comes to visit daily with news from our Devon woodland where I spend much of my time. The pigeon tells me that all is well there and I’m so looking forward to returning to the woods for Christmas. My sentence is 12 months but a combination of various early release schemes means I’m eligible to be released with an ankle tag on December 24th.

We are appealing both the conviction and the sentence, and applying for bail pending the appeals. I’m not expecting the appeal dates before Christmas though this is possible. As soon as I know more I’ll share of course and hope that many can come to court for the hearing(s). The reason I’m here is of course because I chose to join a growing number of concerned citizens around the world calling out our leaders and corporations for failing and even wilfully refusing to act on the climate and ecological crisis with the urgency that our scientists are telling us is necessary. I believe that in common with other instances of radical change through history, non-violent disruptive protest is our only hope if we are to avert a catastrophic future, and these same scientists are backing us in our direct action.

And in common with many historical examples, those protecting the status quo in furtherance of their power and profit retaliate by punishing the change makers. I came to activism with my eyes open, so imprisonment hasn’t come as a shock. I’d rather be at home with my wonderful wife and four children ages 17-27 years. And I’d rather be at work than in prison. Thankfully my cell mate and I keep one another entertained with many stories of our 125 combined years and there is a phone in our cell to keep in touch with family, friends and colleagues. We only get 2 hours a week outside, but our window allows in some fresh air and the sound of my feathered friend. I’m relieved to have no internet or social media but frustrated to have no real means of communicating with the outside world in writing. I’m dictating this by phone to my daughter Alice. In conclusion, I really want to reiterate my thanks to all for your loving support, however it comes to me, including via the cooing of my friendly pigeon. Who has come to signify all life on earth, life for which we all must fight. Technology is not the answer!

PS. to the wonderful XR Wandsworth, I look forward to hearing you outside again soon, especially William’s drum. My new cell is on A wing, with a south facing window. Follow the pigeon.

PPS. Here’s one of the lovely messages which I thought I’d share because it’s written from a child’s perspective in the future with an optimistic outcome.

In the future, when asked who their hero is, a child responds James Brown, the soul singer? No. The environmental activist. He was blind, a Paralympic gold medalist, and caring father.

Can you imagine cycling at full speed when you can hardly see?

Apparently he was afraid of heights but he still climbed onto a drill rig to protest ground water pollution by HS2s tunneling, and onto a plane to protest airport expansion. I think he is a 21st century Emily Davidson. She died whilst protesting for women’s right to vote. She tried to attach a flag to the king’s horse galloping at full speed. To me, James Brown was just as brave and so inspiring. He’s my hero. He worked as a maths teacher in local disabled children’s services and ran a charity supporting people with disabilities. He was intelligent and cared about others and the future of the planet. He wanted all children to have a safe and fulfilling future. Mr Brown recognised that the UK government was not acting with the urgency that preventing the climate crisis required and used disruptive non violent protest to raise awareness about their hypocrisy and the awful dangers posed by climate breakdown.

In his defence statement, he said he wanted to challenge himself and face his fears – something everyone can emulate. Because of his high profile and a clampdown on the right to protest, the judiciary decided to make an example of him. In 2021 a few months before the UK hosted COP26 climate summit, Mr Brown became the first XR environmental protestor to be imprisoned, unfortunately he wouldn’t be the last or the worst affected by the sick and dirty authoritarian pushback to defend the status quo. Others risk their life. The campaign group Global Witness reported that 227 environmental defenders were murdered around the world in 2020 alone. I visited the former prison where he was incarcerated and found just walking there in the dark to be quite scary. Despite huge obstacles, Mr Brown and other activists sacrificed their freedom to alert the public about the climate and ecological emergency and pressure the world’s governments into matching their words with bold action. His cruel sentence exposed the warped priorities of institutions protecting short term profits in a failing system.

Were it not for the bravery and sacrifice of environmental activists, our society would not have achieved the rapid decarbonisation and transformation required to avoid further mass extinction. James Brown later became a key figure that inspired the Global Green Energy Transition and direct democracy.

The above was written by Paralympic gold medalist, James Brown, from Wandsworth prison where he is serving a 12 month sentence for climbing on a plane in October 2019