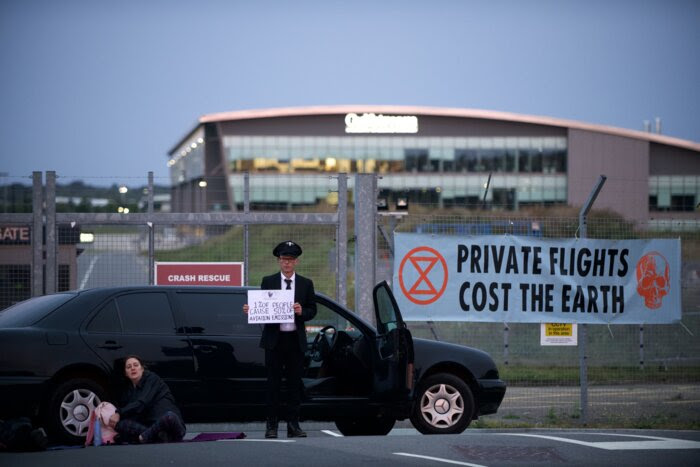 In the recent Chatham House Climate Change Risk Assessment report, the bare facts were laid out: “If emissions follow the trajectory set by current nationally determined contributions (NDCs), there is a less than five percent chance of keeping temperatures well below 2°C above pre-industrial levels, and less than one percent chance of reaching the 1.5°C target set by the 2015 Paris Agreement.” The worst case scenarios are now becoming an ever closer reality.

And yet, World leaders heading into COP26 have shown no sign of true leadership on the greatest crisis of our time. Nothing on the table in the run up resembles a compassionate and functional response to the crisis, so why should we place any faith in the summit itself?

You can read XR UK’s positioning statement on COP here.

Now is the time to use the momentum from the Impossible Rebellion and COP26 to continue with mass outreach and mobilisation for Rebellion in 2022. This means going back into our communities and building our local groups, getting trained and training others. Because power belongs to the people, not with the COP process.

If you’re going to COP in Glasgow: Read more about the plan here and the XR Scotland rebel agreement here, and join XR Scotland Telegram channel here for live updates.

In this issue we put the spotlight on what activists from XR and associated movements are saying and doing. Find out more about plans for COP26 and the case of James Brown, the former Paralympian sentenced to a shocking 12 months in prison, highlights the lengths this government is prepared to go to silence us.

But we won’t be silenced. We have no choice but to continue speaking the truth. The fight goes on.

On Saturday October 2nd, Extinction Rebellion activists blocked all major entrances to Farnborough Airport, calling on the world’s super-rich elite and governments to ditch private flights. They locked to a stretch limousine, fuel barrels and a giant steel tripod in call for polluter elite to cut their emissions.

Farnborough caters to the 1% by exclusively providing services for businesses and private aircrafts. Private jet flyers are responsible for half of aviation’s global emissions.

The 30,000 private flights to and from Farnborough Airport each year carry an average of just 2.3 passengers, with each passenger responsible for the emission of nine times as much carbon as an economy flight to the US and 20 times that to Spain. The airport has permission to increase flight movements to 50,000 a year.

In an emergency, private jets should simply not be an option – but instead it’s the only growing aviation sector since the start of the pandemic.

Gold medal winning Paralympian, James Brown, was sentenced to a 12 month prison sentence by a judge at Southwark Crown Court after being found guilty of public nuisance. His crime was climbing on top of a plane at London City Airport during the October 2019 Rebellion, taking non-violent disruptive action and raising the alarm about the climate and ecological emergency. James is registered blind and will serve at least 6 months.

Raj Chada of Hodge, Jones and Allen Solicitors, who acts on behalf of XR, said: “We are shocked that James has been sentenced to 12 months in prison. James, registered blind and a gold winning Paralympian at 5 games, should not be in prison for taking part in this protest. This is a dangerous judgment for our right to free speech, our right to protest and for those who campaign on environmental issues. We will be appealing this sentence”.

You can donate here to XR’s legal crowdfunder, which has funded James’ legal advice so far and will help with an appeal of the case.

The story leading up to COP26 is one of deceit, greed, stupidity, injustice, failure and cruelty by world governments and their corporate partners. The first COP meeting was in 1995. Since then, there have been 25 meetings. After nearly 40 years of warnings and 30 years of international climate negotiations, carbon emissions from burning fossil fuels have increased by over 50% since 1990.

Extinction Rebellion has been protesting for most of the year in the run up to COP26. While we have been doing this, we’ve seen the IPCC’s harrowing ‘code red for humanity’ report, another catastrophic wildfire season, floods from Germany to Cameroon, and apocalyptic droughts affecting millions in Syria, Argentina, Madagascar, and the world at large. The rapidity with which our life support systems are buckling has shocked even seasoned climate scientists.

We’ve rattled them, out-argued them and exposed their empty climate rhetoric. After a year of astonishing and creative protest, we arrive at COP26.

The COP26 Coalition and their international allies are planning a decentralised day of action for Saturday 6 November, the middle weekend of COP26. The flagship action will be in Glasgow, but there will also be actions across the UK and worldwide.

Not everyone can make it to Glasgow. But XR UK, XR COP and XR Scotland still want you and your groups to get involved wherever you are. We want you to design your actions and protests to suit your local circumstances using the themes below. Our COP26 rebellion will not just be on the streets of Glasgow but across the world.

After an epic 500 mile trek which started in London on 5th September, Camino to COP26 will arrive in Glasgow on the eve of COP, 30th October. The walk is inspired by the faith tradition of pilgrimage and great justice marches of the past – such as the Jarrow March in the UK, the Salt March in India and the March on Washington in the US. The aim is to share personal, human stories and inspire others to add their voices to the growing global chorus demanding that governments treat the climate crisis as the emergency that it is. The pilgrimage is fundraising to empower activist groups in areas most impacted by climate change to join the conversation themselves. You can donate at https://caminotocop.com/donate.

Although led by the Extinction Rebellion interfaith alliance, known as the XR Faith Bridge, people from a variety of backgrounds, of different faiths and none, have so far felt compelled to participate. People will come and go, and local walkers are joining for a day or more. Approximately 15 people are expected to walk the entire route!

Trust the People is back

With rave reviews from within and outside XR, don’t miss this opportunity to explore how we can create connected, caring and resilient communities that are truly democratic.

The course takes you through every aspect of community building – from connecting with people one-on-one, all the way through to organising and running People’s Assemblies, which harness the wisdom and power of the community.

There will also be additional regular workshops to deepen your knowledge and skills, and you can find out more about these on the website.

At the end of the course you will be ready to go out into your communities and shape the change you need! And it doesn’t end there. You can become part of a ‘Hive’, which is a small support group composed of others from the course, who are interested in helping each other put the skills and ideas you have learnt into practice. You can also receive mentoring, and even become part of the TTP training team to pass on your skills and motivation.

Deep Water Rising is a campaign group, which was started in the Midlands, but is now expanding to becoming UK-wide and international. Its aim is to highlight the Government’s failure to respond to the real and present danger of ever-increasing severe and frequent flooding due to climate change.

This group is aiming to build momentum in the final weeks leading up to COP26, culminating in mass actions across the world on the eve of 30th October and dawn of 31st October. Now is the time to come together and plan. Join us on Friday 8 October 7:00-9:00 pm.

Tuesday 5th October sees the launch of the world’s first global citizens’ assembly on the climate and ecological emergency. Considering the failures of COPs-gone-by, the Global Assembly might be the only legitimate decision-making process at COP26 this year. It brings citizens from all over the world eyeball to eyeball (via Zoom) with world leaders and policy makers. The Global Assembly also has a DIY toolkit to help citizens all over the world to run their own community assemblies, which will contribute to recommendations to world leaders. XRUK will be watching closely to see how those leaders respond. And we’ll be waiting to stand up for the voices of the people. You can join the live launch of the Global Assembly here.

‘Subvertising’ – the art of subverting advertising has a long and noble history. The new XR Subvertising Guide focuses on ad-hacking campaigns targeting big polluters and financial institutions that support fossil fuels. It brings together inspiration, advice and instructions about how to carry out a subvertising campaign to critique corporate power. The guide starts with simple ideas for disrupting ads, then looks at subvertising bus stops and billboards.

Complimenting the recent Rebellion against the finance industry, over 200 billboards and bus stop sites were recently hacked with satirical Barclays artworks. The action was coordinated by Brandalism in over 20 towns and cities with artwork from 11 artists.

Do you want to get hold of your own set of posters and ad-hack tools for your own subvertising missions? Brandalism have a limited supply of bus stop-sized posters to send out to towns and cities. Email: brandalism@riseup.net