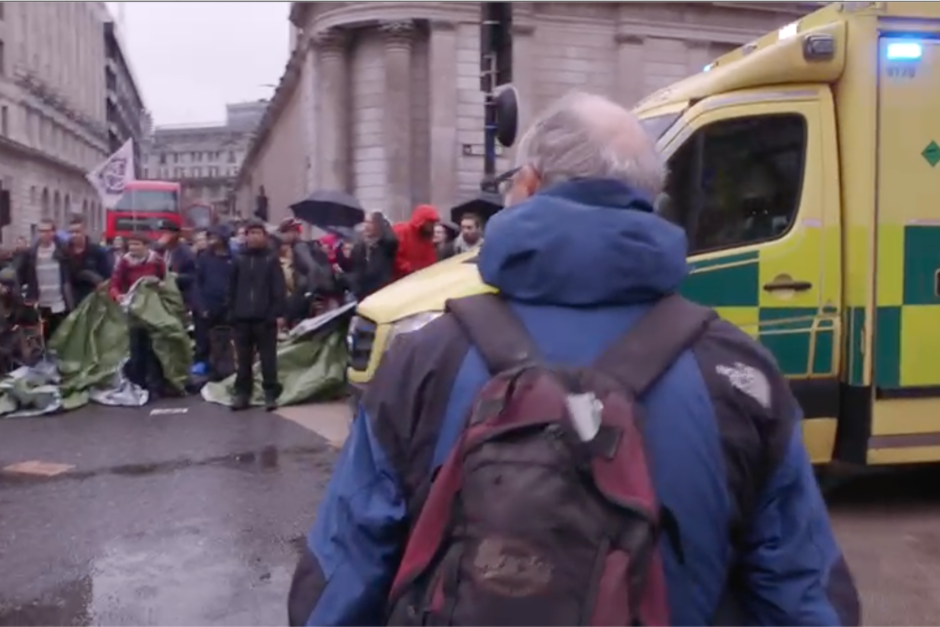 Today key figures in Extinction Rebellion insisted that it has always been XR’s policy to allow emergency vehicles through protests.

Police Liaison coordinator and ex-policeman, Paul Stephens said: “This ‘blue light’ policy is designed into each action and we clear the road to facilitate genuine emergency responses.”

Steward coordinator Alex Dickinson gave some recent examples: “We let an ambulance through during our impromptu march near the Shard. We let one through on our march yesterday after we had taken over the junction outside Blackfriars station. And we let a fire engine through our takeover of the north side of Tower Bridge yesterday.”

Letting through emergency vehicles is a matter of routine. Alex said: “We move aside for flashing lights and sirens – ambulances, fire engines, paramedics – even for police cars that might just be messing with us. We even let through undercover cars!’

So where does the criticism of our reputation, much repeated, for obstructing emergency vehicles come from? Paul Stephens says the police sometimes use this ‘fact’ to our detriment: “The Met often communicate with London Fire Brigade and London Ambulance service and express concern about disruption without mentioning our blue light policy and use it as grounds for a Section 14.”

The source of the stories may go back to one occasion in 2019 at Lambeth Bridge when reporter Guido Fawkes filmed an ambulance with a siren and light unable to get through. On that occasion, it was due to police blocking in protestors.

Alex emphasised that this impression is false: “Even at risk of losing the action site as the police have sometimes used this situation to rush in behind the emergency vehicle to take some of the space we have been holding.

“When choosing sites for actions we consider access to nearby hospitals and fire station and, if necessary, consult first. We try to avoid proximity to such sites.

“For infrastructure such as lock-ons, tripods, beacons, boats and buses, moving aside will not be possible, but we try to place these with enough space around them to allow emergency vehicles to squeeze past.”