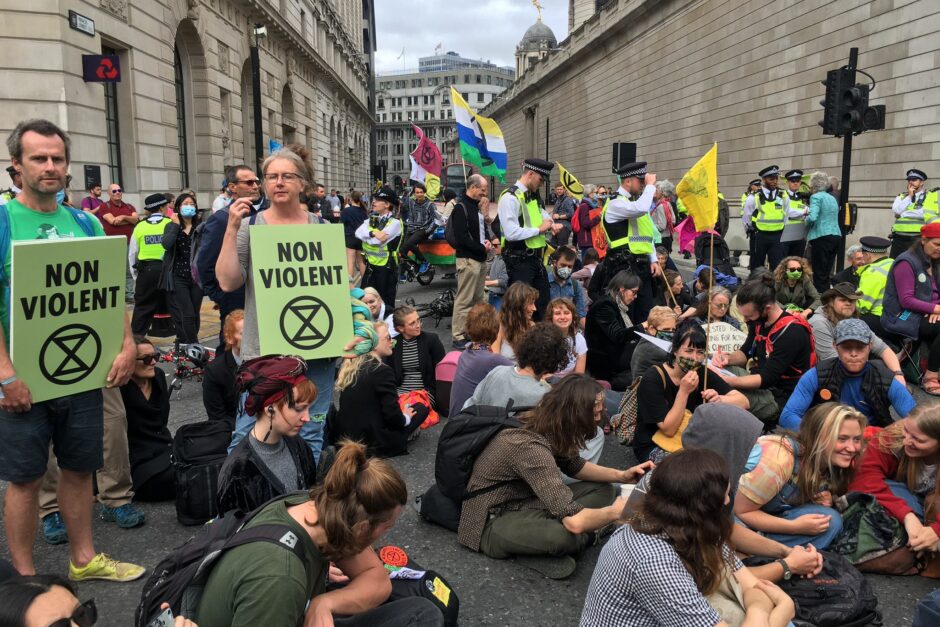 Today over 50 people, joined by thousands of supporters, crossed into the City of London breaking police bail conditions in an act of mass civil disobedience. They pledged to stay sitting in the road outside the Bank of England until the governor of the bank and the Prime Minister of the UK declare an end to all new fossil fuel funding in line with Extinction Rebellion’s immediate demand. Those breaking police bail carried placards reading ‘arrested on suspicion of acting on the climate emergency’, ‘arrested for wanting a future for our children’ and ‘arrested for caring’.

The action today comes as the City of New York declares a Flash Flood Emergency and just days after it was reported that children were forced to eat shoe leather in Madagascar as the country experienced a climate change induced famine. [1] [2]

In March this year the Bank of England was given an additional mandate by the Government to take environmental sustainability and reaching net zero emissions by 2050 into account in its activities. The International Energy Agency said in May this year that in order to achieve net zero emissions by the 2050 date all new investment in fossil fuels would need to cease by the end of this year. [3]

The world’s 60 largest banks have funded the fossil fuel industry to the tune of $3.8 trillion since 2016. [4] The action today highlights the Bank of England’s failure to regulate these banks and points to the fact that it still holds investments consistent with 3.5C of warming by the end of the century. [5]

Despite the Bank of England’s stated commitment to a green recovery from the impacts of the Covid pandemic, a report by Positive Money found that by June last year 56% of Covid funding distributed by the bank went to carbon intensive industries, including airlines, car manufacturers and oil and gas companies. [6] Andrew Bailey, Governor of the Bank of England, pointed to the Covid pandemic as a reason for deprioritising commitments to tackling climate change, instead of using the opportunity to transition the Bank’s activities away from carbon intensive industries. [7]

A report, also released in March this year, by the pressure group Positive Money found that “rather than responding to the current crisis in a way that supports the transition to a more sustainable and just society, central banks have propped up a financial system that is facilitating climate change, ecological destruction, and a higher risk of pandemics.” [8]

Co-founder of Extinction Rebellion, Gail Bradbrook, said: “We are in unprecedented times when everything we love is at risk. We have no other power than our own personal sacrifice – today people are breaking bail in desperation as nature’s life support systems are breaking down. This is a plea to those with power at the Bank of England to take the actions that are needed to sustain life.

“Why are they not willing to call an end to new investments into fossil fuels? When will they break free from the shackles of a broken political economy to do the right thing? The people breaking bail today are calling on the Bank of England to be accountable in the same way they are standing accountable for their actions today, focussing on what future generations need from us in these horrendous times.”

Olympic Gold Medalist and member of Extinction Rebellion, Ettiene Stott, 42, said: “I am breaking my Police bail today because I am fed up of being criminalised for my peaceful protests. The real criminals are those in power and in control of carbon intensive companies who know the consequences of continuing business as usual, yet continue regardless, emptying the till and taking our future with them.

“I am a good person, a kind person and I believe myself to be a responsible citizen. I will be held to account for my actions, but I must also be accountable for inaction in the face of this planetary emergency. I cannot just stand by in these times and watch as we destroy everything we hold dear.”

[6] THE COVID CORPORATE FINANCING FACILITY Where are the Conditions for the Billion £ Bailouts?​​​​​​​http://positivemoney.org/wp-content/uploads/2020/07/CCFF-Final-version.pdf