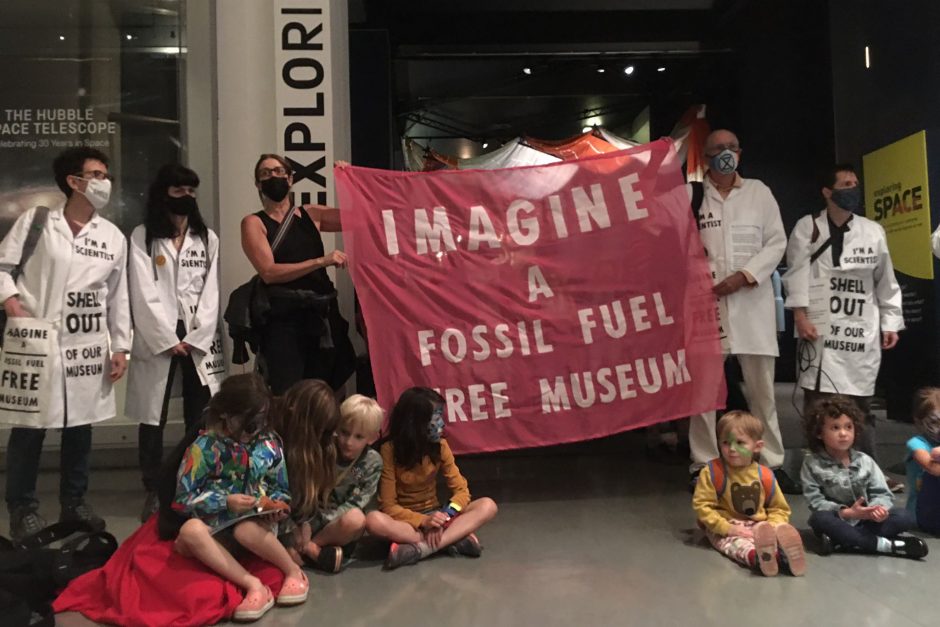 It’s been another rollicking two days over the bank holiday weekend. We’ve seen a two-pronged truth-offensive on the Science Museum, a mass-disruption at St Paul’s, the kick-off of Football Rebellion, and a poignant collaboration with a major Chinese climate striker.

As befits a movement, we’ve also been moving in large numbers: we joined Animal Rebellion at the national animal rights march; XR Unify hosted a vibrant carnival; and a Global Majority-led Crises rally connected with the local Brixton community.

Today – as Hurricane Ida strikes New Orleans – we’re entering our second week in active rebellion. But it’s a marathon not a sprint, so now might be an extra-good time to check out one of our magnificent rebellion hubs for some quiet and rest.

Whatever happens in the coming week, we’ve already witnessed enough determination, grit and beauty to make future generations proud. Whether we win or lose, however much effect we have, we know that we’re giving our all. Because it’s right.

(Tired of watching the news and not making it? Join us at News UK at noon today for what could be our biggest occupation yet!)

Night at the Science Museum

On Sunday, XR Scientists and XR Families put together a Connecting Communities event to draw attention to some sneaky greenwashing and shadowy sponsorship at the Science Museum.

Having pre-booked their tickets, around 40 rebels arrived and either glued or locked on in the museum. At 8pm the police gave up and left them to their devices, making this a real-life Night at the Museum situation. Many of these rebels are scientists who have a firm grasp on what the science is telling us and are sick of the scientific community’s warnings falling on deaf ears.

Their quibble is as follows: respected national institution devoted to public learning, the Science Museum, puts on exhibit called ‘Our Future Planet’ which is secretly funded by fossil fuel giant Shell. The primary subject of the exhibit? Carbon capture. That is, advocating the world-saving strategy of putting CO2 back in the ground instead of raising the question of whether to stop burning it.

Trouble is, SHELL, XR Scientists inform us that to avert total climate mayhem, we need to keep at least 80% of fossil fuels in the ground. We can’t have a liveable future if companies like Shell and BP insist on continuing their extractivist activities, and if respected British institutions like the Science Museum don’t stand up for the truth.

The ocean is on fire

Speakers from the scientific community drew a crowd outside the museum as they lay out a selection of stark facts, including that 1 billion animals were boiled in the recent Canadian fires and that the same number of dollars (1 billion) were spent by fossil fuel companies in their efforts to block climate legislation in the 4 years following the Paris Agreement. And that even the ocean is on fire.

One speaker highlighted the importance of seeing the climate and ecological crises as deeply intertwined; two sides of the same coin. We can’t tackle one without considering the other.

Another speaker gave her account of refusing to speak on a New Scientist panel after she learned that the event was sponsored by fossil fuel goliath BP. She reported that the debates were set to centre around carbon capture and hydrogen fuel: both interesting prospects but, crucially, both solutions that would not harm BP’s bottom line. The clarity of the science is getting muddied by the fossil fuel industry’s now decades-old smoke and mirrors performance. The speaker has given up hope that a collaboration is possible for a better future.

After the speeches helped us to see the realities and imagine what truly seems impossible, the samba band struck a beat and led the crowd down Cromwell Street. As they turned the corner, a big blue van came into view with a small figure sitting triumphantly on top. Another surprise site-take!

This one enjoyed live music, dancing, and crowd participation singing (lyrics here), as well a beautifully resonant samba circle. A couple of police officers were even seen cracking a smile at this song, to the tune of ‘Let it be’: ‘When Earth finds itself in times of trouble, Mother Nature calls to me. Speaking words of wisdom, Save the bees!’

On Sunday morning hundreds of rebels gathered at Ducketts Common for a joyous, beautiful display of global solidarity. Between marching musicians, rebels in ancestral dress, and all kinds of artistic marvels including a large ‘HS2 white elephant’, this was the rebellion at its colourful and most inclusive best.

At noon, the group set off along Green Lanes, greeted on all sides by a palpable wave of positivity, with drivers honking in support (rest assured, the difference is obvious!), pedestrians cheering and some even joining, and flyers flying out of rebel hands.

Once they made it to Finsbury Park, the marchers found themselves arriving at a regenerative cornucopia. There was food (‘amazing’ in the words of witnesses), a steel band, a Colombian dance group and a bouncy castle(!). The sun was shining cheerily, and for many rebels it was a welcome relief to be sitting on grass instead of hard London asphalt.

The space’s positivity and safety served as an ideal setting to hear powerful, emotional speeches and poems, discussing the need and challenge for individuals of all backgrounds to join together in the fight against ecocide.

Somehow both relaxed and inspired, rebels will surely remember Finsbury Park with fondness in the challenges to come.

Rebels from Christian Climate Action occupied St Paul’s Cathedral to demand that the Church divest from fossil fuels. The Church of England is reported to have a whopping £80 million invested in fossil fuels.

Rebels gathered in London’s Chinatown in an invitation to the British East Asian community to come to the table. In a scene of potent symbolism, one rebel lay shrouded before a traditional funeral shrine. Where an image of the honoured dead would normally be, there was an iPad showing five tragic scenes from the floods in Zhengzhou which killed over 300 people this summer.

With two now-familiar pink tables stationed nearby to continue conversations started by this sight, rebels reported largely positive exchanges with fellow members of the public. It wasn’t all an easy ride, though: one passer-by with Chinese heritage was outraged by the performance of death (a concept treated somewhat differently in Chinese culture), and nearby restaurant staff expressed their disfavour. The rebels involved afterwards remarked that it’s exactly these sorts of emotional reactions which our movement uses so well in the quest to start conversations.

The action was co-organised by Howey Ou, a prominent climate striker from Mainland China, who took the opportunity to hold a Q&A with 12-year-old Hong Kongese climate striker Lau Hin-yi. This was followed by a panel discussion hosted by XR East + South East Asians.

After a full-on day of outreach and discussion, all those involved felt tired but eager to double down on engaging with the Chinese community.

At the Rally in Brixton Market, the crowd heard speeches about the importance of community in facing intersecting struggles.

One speaker suggested that instead of waiting for marginalised communities to go to XR, that XR should come to meet with communities. Rebels connected with stall holders and small business owners in the market, did art blocking, and there were jovial community vibes all round.

Animal Rebellion and XR marched with other animal rights groups in the National Animal Rights March. They stood together and demanded a better, more just food system than the exploitative one we have currently. The march made symbolic stops at Unilever, Cargill and the Marine Stewardship Council. Find out why here, here and here.

As usual, the animal rights crowd has great signs, including ‘Love animals? Prove it’ and ‘How much would a cow have to resemble a dog in order to deserve the right to live?’

‘Will your club be underwater by 2050?’ Football Rebellion reached out to fans outside Fulham FC by playing a match wearing snorkels and life-jackets.

Meet at News UK, near London Bridge tube station. Bring your flasks of tea and your rebellious hearts, as we disrupt the City of London and embody the democratic systems we want to see.

Did you know there are four Rebellion hubs stationed around London this Rebellion?

The hubs are low-risk spaces where you can go to be, chill, meet up, do art, attend talks and trainings, and eat! There are loads of useful trainings on, like Know Your Rights (essential for arrestables), NVDA and Witnessing Police Behaviour, and cool workshops on topics like tree climbing, co-liberation and climate grief. There are also listening circles to go and connect with fellow rebels, and listen and be heard. Check ‘em out.

See here for more info about where the hubs are and when they’re open. See here for a schedule of what’s on.

Back the CEE Bill

While we’re on the streets or supporting how we can from home, the Climate and Ecological Emergency is still creating a wedge in Parliament – with a little help from incredible campaigners from across the UK.

115 cross-party MPs now back the CEE Bill, and it’s supported by over 100 councils and over 350 organisations including Greenpeace, The COOP bank and Surfers Against Sewage. With the post COP cliff edge looming, it’s time to get behind this new law to save the planet.

Join Zero Hour to find out how we’re lobbying your MP and to get involved.

“People respond to different things in different ways. Some people won’t like an action and other people will, y’know? I think that diversity in the way they [Animal Rebellion] are approaching things is really important and necessary. I can see how it upsets a lot of people but I think it’s incredibly valid and things are in such a bad way now that it has to get messy.

No change ever came from just sitting back and asking nicely. Sometimes, at the start of going and doing things, you’ll be scared of how you’ll be received. When we started doing the Cube of Truth stuff, people would throw chicken at us and it was quite scary.

But actually, I think that on the whole as long as you approach it conversationally it can be received well – if you do it properly, with love not judgement.”