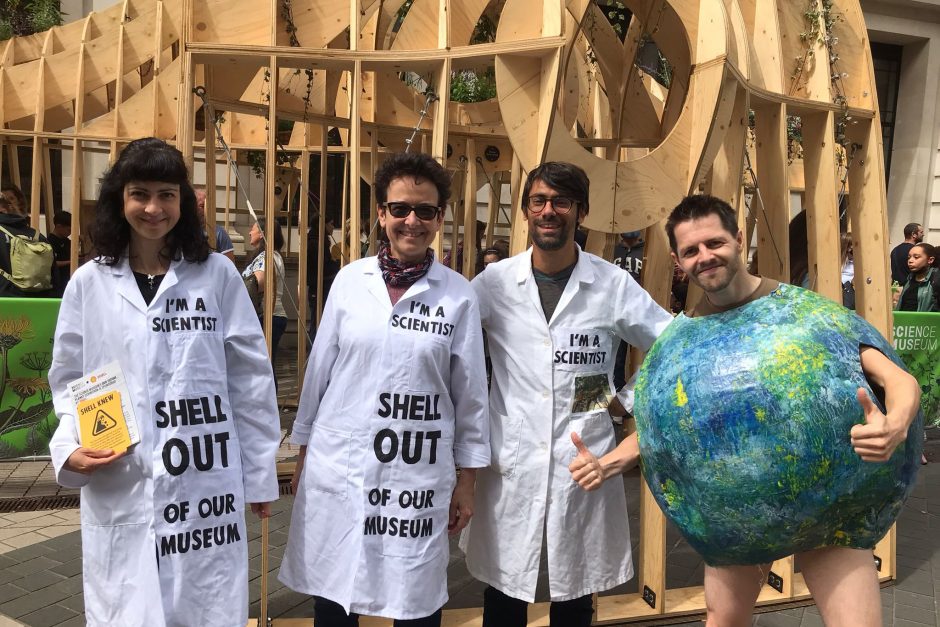 It’s Shell Out There

It’s a summertime bank holiday and to celebrate we are having a family friendly event at the Science Museum. And because it’s an official holiday there are lots of surprises and entertainment like the Dirty Scrubbers industriously laundering that filthy oil money.

So what are you waiting for? Get on your bike and high tail it to South Kensington!

The serious truth behind the high jinks will be covered by our excellent XR Scientists group. Their Shell campaign began after the Our Future Planet exhibition sponsored by the oil giant started in May. They will be out in force to tell the truth about the harm the company and the industry does and the green wash it sprays around to cover its tracks.

The aim is to remove Shell’s social licence. And it is on the back foot after a difficult year. First came the Shell Seven victory in this country when jurors found six rebels who smashed windows at the headquarters not guilty of a criminal offense. Around the same time, a Dutch court ruled that the company should slash its greenhouse gas emissions 45% by 2030 compared with 2019 levels.

And this year Extinction Rebellion has an immediate demand that all fossil fuel investment is stopped. And no less an august body than the International Energy Agency agrees that this is the only sensible course.

Caroline Vincent from XR scientists pointed out not just Shell at fault: “Today we are joining forces to demand that our museums drop their toxic fossil fuel sponsorship. And to celebrate and vision a better future.

“So what better place to say keep it in the ground. Let’s demand an end to fossil fuel investments and stop the harm.

“Imagine the impossible – and make it inevitable!’