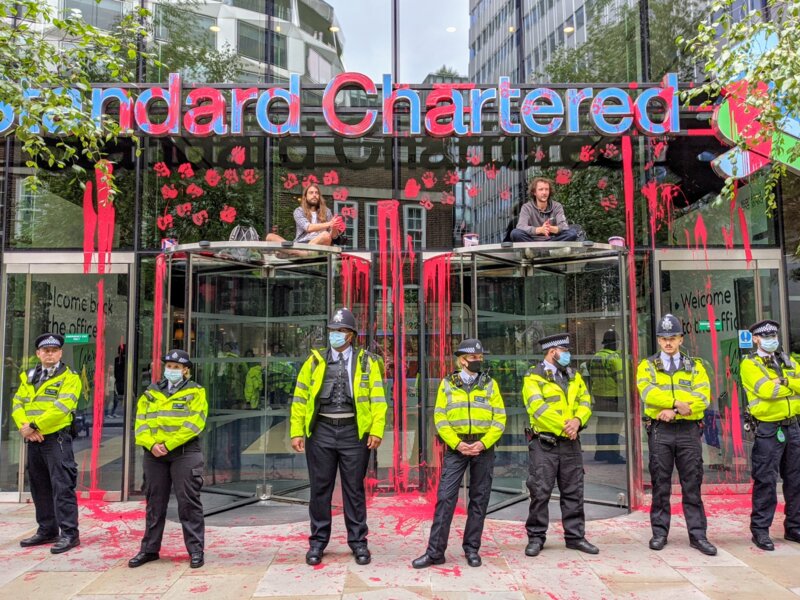 If two days’ worth of bumper actions doesn’t make you want to get out on the streets and jump around, we just don’t know what will

In the last two days, we’ve had a march on a major government department, a tour of ecocidal institutions followed by an exhilarating occupation, a solemn meditation-protest, and the wrap-up of Digital Rebellion’s first week of action. Read below to get the whole exciting story. (Or if you’re feeling attentive – check out our stock of day-long livestreams.)

The vibes are alive. What we’re doing is working. Have you got weekend plans?

‘We don’t want your Blood Money’

A crowd of lionhearted rebels ventured deep into the City of London yesterday for a tour of our country’s dark history. The Blood Money march stopped at various sites renowned for financing the slave trade and pouring money into ecocidal industries.

At each stop, our tour guides enlightened the hundreds-strong crowd about the atrocities enabled by institutions like Standard Chartered, Guildhall, Debevoise & Plimpton, and the Maples Group. It was a solemn time of remembering those who had suffered and still do because of the City of London’s amoral profiteering. It was also a time to feel the anger and pain of such abhorrent injustice to people and planet.

Trying to save the world, honey

In true XR style, the march also had its lighter moments, with the samba band keeping the energy up and the chants breaking out in pockets throughout the snaking crowd. Perhaps the day’s catchiest chant was: ‘We don’t want your blood money / Trying to save the world, honey!’ And maybe the cheekiest: ‘Change your diet for the planet / EAT THE RICH’.

The march found its resting place at Paternoster Square, by St Paul’s Cathedral, where things were about to get a lot more visceral. Armed with chewing gum and 2p coins coated in red paint, rebels danced until the signal was given to stick the coins to the floor of the square. To really bring the concept of blood money to life, a group then poured vast quantities of gloopy fake blood on the floor. And then the square ran red with the blood money of the City…

As the march weaved through the City’s streets, curious faces peered down from the thousands of office windows. Several waved and gestured their support. But these were small crumbs of connection in a trudge through a largely faceless part of the capital, in which ancient institutions towered over our hopeful change-hungry spirits and seemed to twiddle their moustaches at our souls.

As rebels lingered in the Square to dance and revel in the spirits of a series of successful actions, the word went around: we’re not done.

No one was in a rush to leave. But after two hours back in Paternoster Square, the samba band got back in motion and headed down past St Pauls. In the distance, a beautiful sight loomed: three bamboo structures holding four heroic rebels. In front of this, though, was a line of police. The marchers hauled ass round a sidestreet and – amazingly – were too quick for the police. Hundreds found their way to the structures before officers finally cordoned off all entrances.

After such an entrance, the energy inside the newly-minted site was exhilarating. Once enough rebels had sat down in the centre to secure the area and make a human auditorium, we heard seriously moving and inspiring speeches. As Marvina Newton, rebel and founder of Black Lives Matter Leeds, said:

From here, rebels moved onto an impromptu people’s assembly – but, sadly appropriately, it was here that police were ordered onto the offensive. Rebels weren’t going to take this sitting down, though. Or rather they were, but they were going to do it while the resurgent samba band drowned out police threats. And then, as police changed tack, rebels stood up and got down. The mobile sound system kicked off with KRS-One’s Sound of da Police and only upped the ante from there.

The police appeared to understand that energy like this wouldn’t be moved easily and they retreated. An hour-long dance-a-thon ensued, punctuated only by some upbeat chanting and an encouraging voice message from Marvina Newton’s 10-year-old daughter.

As evening drew in, the police drew up their most imperial-looking columns and marched in, with around 300 officers now potentially outnumbering the rebels who remained in the junction. It took a decent while, but police eventually contained the earth-protectors on the pavements. Then, they made their way through those who refused to be moved. With each arrest – many featuring the classic ‘ragdoll’ tactic, just as many walking proudly – the crowds nearby erupted with support.

After all this work, the road was far from clear. The bamboo structures still remained, with around ten rebels glued and locked around the tensegrity beacon’s base, two suspended in the beacon, and another two atop the tripods.

However long the bamboo site remains impassable to traffic, its euphoric energy will occupy the minds of many for a long time in the future.

A jolly mass of rebels set off from Hyde Park Corner in a colourful march towards the government’s Department for Business, Energy and Industrial Strategy on Victoria Street. The marchers had a clear and unambiguous message: Stop the Harm.

A pack of Corp Rats were theatrically encroaching on the floods of counter-cultural protestors, tempting them to give up the struggle and play their game: ‘Consume’, ‘Buy more’, ‘Money is our God’. But the rebels did not fall prey to their tricks and instead pressed on to BEIS with unwavering determination.

When they arrived at BEIS, there were inspiring speeches to enjoy. In keeping with the theme so far, everyone was invited to come to the table for Crisis Talks. A broad array of groups discussed the best ways to convey the climate crisis to their particular communities.

After a dramatic die-in, there was time for young people to come and speak their minds. Often dismissed by society as too young to make real change and take part in democratic processes, on this sunny Thursday afternoon, young people claimed their rightful space in the conversation.

XR Buddhists meditated outside Barclays (for now obvious reason) and Canada House to protest ReconAfrica. It’s a Canadian oil exploration company that looks to profit from Botswana and Namibia’s natural resources to the detriment of our shared planet.

Animal Rebellion dyed the fountains at Buckingham Palace red and demanded that land owned by the Crown stop supporting hunting and animal agriculture. A recent report found that ‘The Queen’s lawyers secretly lobbied Scottish ministers to change a draft law to exempt her private land from a major initiative to cut carbon emissions.’ Tut, tut, Queenie.

A rebel on the cyber-frontline reports:

‘That was unexpected. We ended our Barclays campaign with a beautiful script drafted from all the rebels’ feedback from the week. The staff have been amazing with us and we with them, through over 800 calls that we had with them this week. Countless call responders have agreed to relay climate-based concerns up the chain of command.

Barclays’ investment department were inundated with calls about divestment from fossil fuels and requests for fully-managed ethical investment options (something they do not yet provide).’

The ‘DR’ Telegram group is brimming with positivity as rebels share their successes, challenges and reactions. One rebel’s call with a Barclays employee turned into a 50-minute-long Q&A amounting to a ‘Heading for Extinction’ talk; another confessed to reaching the same advisor two times in a row, but put on an accent to start a new discussion. Resources and ideas are whizzing around the group like swarming bees.

Digital Rebels will be taking some well-earned rest over the weekend, before turning their now-seasoned efforts to the Bank of England. We look forward to hearing their progress!

Led by Animal Rebellion, this march is a chance to unite against the exploitation and cruelty of the current food system and to vision a brighter future together for all beings. It’s time to act. Meet at Smithfields Market at 12:30pm. Details of the route here.

The Crises Rally in Brixton will highlight the interconnections between the Impossible Rebellion in London and the various actions of prolonging intergenerational Rebellion in parts of the Majority World. See here for more details.

Feeling anxious, lonely, or overwhelmed? Need someone to talk to? The XR Rebel2Rebel Telephone Active Listening service is here to support you. All you need to do is make a request and a trained and vetted Rebel Active Listener will give you a call.

To find out more about TESN and its services, see here.

“I’m Victor, a father to four sons in their 20s. Nothing takes hold of me as much as my love for those lads, and their dedicated mother. And nothing troubles my heart and mind so much as knowing that their lives will be framed by the future of a planet that is in a rapidly deepening crisis due to mankind’s actions. And now, this crisis continues to spiral out of control due to inaction and a business-as-usual attitude.

This knowledge often overwhelms me: I think of the millions of people whose lives are already at serious risk, and those who have been taken by floods, fires, extreme heat and famine. It leaves me feeling hopeless and desperate.

I do not have confidence that our Government is willing to do everything that it possibly can to limit the disastrous consequences of which international scientists are now almost screaming. We have to see an end to the worst practices that are embedded within daily life (think cars and pollution vs public transport and cycling) and, we have to stop the rot in our economy which continues to support and fund the fossil fuel sector.

I simply cannot be a bystander, not any longer, so I have to rebel against the system that is all too happy to ‘talk the talk’, but not so keen to ‘walk the walk’. Otherwise, I shall deprive myself of all hope.”