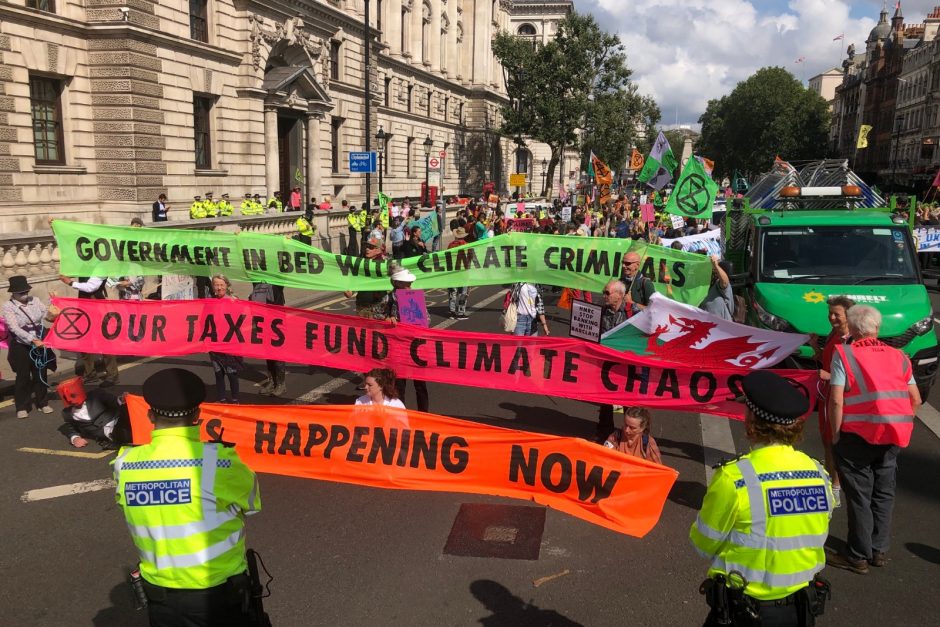 On Tuesday 24th August, the second day of Extinction Rebellion protests in London, over 50 people from XR Wales occupied Parliament Street, outside HMRC offices, to demand HMRC end their relationship with Barclays, Europe’s largest financier of fossil fuels [1]. They were joined by thousands of others shortly after who were there to take part in the Impossible Rebellion.

At around 11 AM, activists from Wales arrived at the HMRC building holding banners saying, ‘Government in bed with climate criminals’ and ‘Trethi i Barclays = Llifogydd yng Nghymru’ (Taxes for Barclays = Flooding in Wales).

Members of XR Wales performed slapstick skits which depicted Boris Johnson and Barclays’ CEO Matt Hammerstein, being served cash on a silver tray from a HMRC butler, whilst tea was served from an oil can to an “old boys’ club” tea party. Regular invitations were made to staff working in the HMRC building to come out to a table which had been set up in Parliament Street, to discuss their banking relationship with Barclays, who are widely documented to be Europe’s biggest funder of tar sands, fracked oil and gas, coal power and fossil fuels [2], since the Paris Climate Agreement. [3]

Chalk spray was used to create a dramatic image of dripping oil and blood and pre-recorded testimonies from people in the UK and the Global South, who have been impacted from flooding events caused by climate change, were played on a loop. Flooding experts and politicians spoke about their own experiences of dealing with extreme weather as the protest unfolded.

​​​​​​​HMRC currently uses Barclays’ payment solutions to process National Insurance and Self-Assessment tax payments, Child Benefit repayments and a range of other HMRC transactions. Protestors say this is an unacceptable relationship since Barclays invest their profits into financing the fossil fuel industry, with over £104 billion having been invested since the Paris Climate Agreement [2], leaving tax payers no choice but to be complicit in environmental exploitation without their consent or knowledge.

Calum Macintosh from South Wales, who took part in the protests, said: “I’m here because I’m outraged that HMRC has this contract with Barclays, yet the general public are unaware of the role Barclays have in the climate crisis. It’s not fair that we have no choice in this when we conduct our business with HMRC. Many Welsh coastal areas are now in grave danger of flooding [4] and this is particularly worrying for me because my own home was flooded in Storm Dennis last year and it’s now difficult for me to get home insurance because we think it will happen again.

“Westminster is pandering to the billionaires who profit from fossil fuels. [5] What’s even more frustrating is that HMRC’s own Sustainable Procurement policy [6] says they “aim to achieve value for money whilst minimising damage to the environment” but this is greenewash and the public can’t trust them. One of our Welsh youth activists wrote to HMRC recently demanding they stop using Barclays [7]​​​​​​​ but she hasn’t received a response, so we’re here now to make sure they listen.”

Cardiff is one of the most at-risk cities in the world to be critically impacted by climate crisis, according to a January 2020 study by international real estate company Nestpick [8] and unless urgent action is taken on climate crisis much of Cardiff will be underwater in 80 years, according to an October 2019 study by environmental consultants Afallen [9], with iconic landmarks like Cardiff Castle and the Principality Stadium flooding every year.

Those living on the Welsh coast are most vulnerable to rising sea levels. In 25 years – or sooner, if forecasts worsen or a storm breaches current sea defences – a task force led by Gwynedd council will begin to move the 850 residents of Fairbourne in North Wales out of their homes. The whole village – houses, shops, roads, sewers, gas pipes and electricity pylons – will then be dismantled, turning the site back into a tidal salt marsh. [10]

Rhiannon Hargreaves, a financial analyst from Cardiff said: “We’ve COP26 coming up – how can the UK government possibly claim to be a world leader on climate action whilst bankrolling Barclays with public money? There are absolutely no excuses for HMRC signing contracts with a bank which causes so much harm to the climate. In just three years from 2016 to 2018, Barclays provided $85 billion in funding to fossil fuel companies and tens of billions continue to be invested each year, yet global wildfires and flooding are causing devastating destruction to so many regions.​​​​​​​ These events will continue, with the poorest hardest hit. The UK Government must rapidly terminate their contracts with Barclays for processing HMRC payments. In my view, there can be no ethical or economic argument for continuing this relationship.”

Extinction Rebellion Cymru spokesperson, David France said: “The latest IPCC report [11] could not be clearer: the changes we are living through are unprecedented but reversible to a certain extent if we reduce our greenhouse gas (GHG) emissions. If members of the public want to find out more about how they can help, they can get in touch with their local Extinction Rebellion group, write directly to HMRC [12] and even do a quick check on their own finances by finding out more about ethical banking at switchit.money or bank.green.”

Activists across Wales supported the protests in London by taking action outside their local Barclays branches, while activists in Cardiff stood outside Ty William Morgan House, the new HMRC building in Cardiff, to hand out leaflets and tell HMRC staff about Barclays’ role in the climate crisis.

Extinction Rebellion are calling on the Government to; tell the truth, act now and hold Citizens’ Assemblies [13] to work out an equitable way forward on the climate crisis for all sectors of society. Endorsing the global call of the International Energy Agency [14], Extinction Rebellion is also calling for a complete and immediate ending to all new fossil fuel developments.

[3] The Paris Climate Agreement is an international treaty that commits most of the world’s governments to addressing climate change. https://www.greenpeace.org.uk/news/what-is-paris-climate-agreement-and-why-does-it-matter/?gclid=CjwKCAjw9uKIBhA8EiwAYPUS3FIro-xmP-uXOvyuYvpi4zHdKAsWPLOVgWJ3eF6WZRZsGqJFIfPaCBoC2n8QAvD_BwE

[4] The areas of Wales that would be under water and lost by 2050 based on current climate trends ​​​​​​​https://www.walesonline.co.uk/news/wales-news/flooding-wales-submerged-climate-change-20870932

[5] Some of the world’s biggest oil companies are currently paying negative tax on their fossil fuel extraction and production operations in the North Sea. Official data published by the UK government-backed Extractive Industries Transparency Initiative shows that in the tax year 2019-20, ExxonMobil received £117m in total from HMRC, Shell got £110m, and BP received £39m. https://eiti.org/united-kingdom

I am writing as a concerned young person to demand that HMRC stop using Barclays bank accounts to process National Insurance and Self-Assessment tax payments, Child Benefit repayments and all other payments HMRC handles.

Barclays is an unacceptable bank to use as it ranks #1 in Europe for fossil fuel financing, having poured £104 billion into the sector since the Paris Agreement. Taxpayers are thus made complicit in environmental exploitation without their consent or knowledge, a wildly unethical practice for HMRC to enable in the middle of a climate and ecological crisis. Furthermore, by handling Child Benefit through a Barclays account, HMRC require caregivers to endanger their children’s future to secure the money needed to look after them in the short term.

I do not want my present to come at the price of my future. The UK government declared a Climate Emergency in May 2019; why has HMRC not divested from fossil fuels to align themselves with this declaration? HMRC has immense influence within Barclays and their cutting ties with the bank would send a strong message that the UK government does not endorse environmental exploitation and would push Barclays to divest from fossil fuels themselves.

Divesting from Barclays is undoubtedly the right thing to do. My future and the future of my generation depend in part on the courage and ambition of such organisations as HMRC. I demand that you use this responsibility wisely.