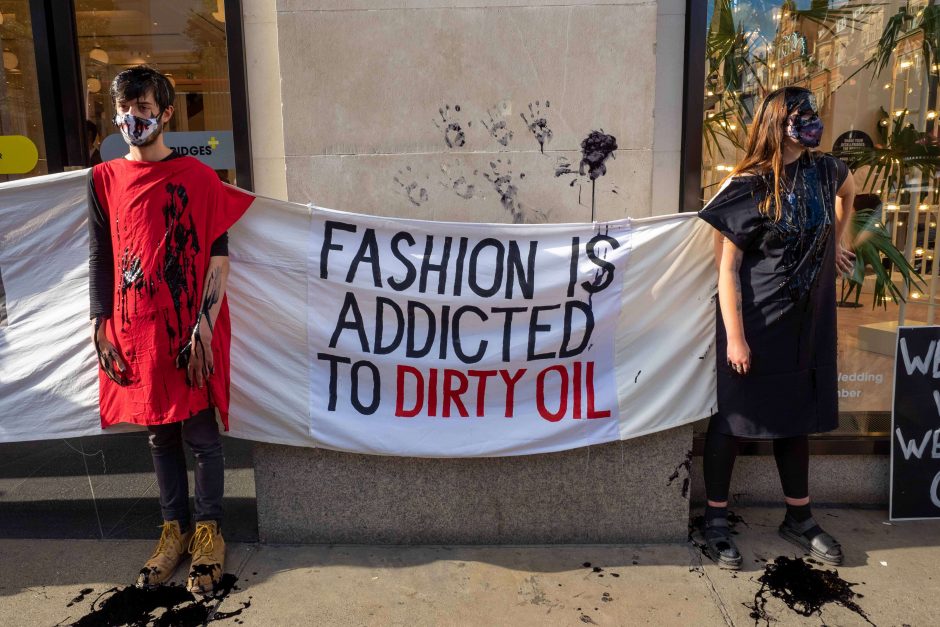 On the afternoon of Tuesday 24th August 2021, four members of Extinction Rebellion Fashion Action glued themselves to the front door of Selfridges on Oxford Street. They were wearing a dress inspired by designer Issey Miyake’s ‘A Piece of Cloth’ (APOC) which displayed the messages: ‘Fashion is addicted to dirty oil’ and ‘Code red for fossil fuel fashion’.

Other members of the protest poured fake oil over the activists and then proceeded to pour fake oil over the windows of the iconic British department store to further highlight the fashion industry’s increasing reliance on fossil fuels, especially Oil.

The group decided to take action following the release of an open letter to the fashion industry published on August 23 on the Extinction Rebellion Fashion Action website and social media accounts.

From fast-fashion to high-end luxury, the fashion industry and its prevailing model rely heavily on the use of cheap synthetic fibres, which are produced from oil and gas. Since the early 2000s, fashion production has doubled – as has the use of polyester, which is now found in over half of textiles.1

Selfridges Group is owned by the Weston family, who also own Primark. Primark appeared as one of the worst contenders in the Changing Markets report ‘Synthetics Anonymous: Fashion Brands’ Addiction to Fossil Fuels, appearing in the red zone for ‘transparency, use of synthetic fibres and commitments to phase them out’. Changing Markets Foundation found that it wasn’t just fast fashion that relied the most on fossil fuels. The other brands in the red and yellow zones include Adidas, Nike, Puma, Burberry, and Calvin Klein, all of which are stocked in Selfridges.

Global consumption of clothing and footwear is expected to increase by 63% by 2030, from 62 million tonnes in 2015 to 102 million in 2030. Synthetic fibres represent over two-thirds (69%) of all materials used by the apparel industry; that percentage is expected to reach nearly three-quarters by 2030. Due to their cheap costs, fossil fuel-derived fibres are a key enabler of the fast-fashion business model, and their production already requires more oil than the annual consumption of Spain.

The recent IPCC report tells us that the climate crisis is ‘unequivocally’ being caused by human activity. The fashion industry is responsible for up to 10% of annual global carbon emissions2. If the industry does not accelerate its response to the climate crisis, it will produce around twice the volume of emissions it requires to stay within the limits set by the Paris Agreement global warming pathways by 2030.3

Changing Markets state that BP’s energy scenario presumes plastic production will account for 95% of future growth in demand for oil demand, while the International Energy Agency (IEA) predicts petrochemicals will represent up to 50% of growth in oil demand by 2050 and 4% in the projected growth of gas demand.1

In order to reach the Paris Agreement targets (1.5-2 degrees of warming) we need a ‘deep reduction in Green House Gas emissions’ however Changing Markets reveals that, out of the 48 companies who feature in their report, none have made a clear commitment to phase out the use of synthetic fibres from their collections4.

“The fossil fuel industry is not only contributing heavily to the climate and ecological emergency, it’s also deeply exploitative. It comes as no surprise that the fashion industry has become inextricably linked with dirty oil. The fashion industry is also built on a long history of environmental and social exploitation throughout its supply chains, particularly of those in the Global South by those in the Global North. We are calling for fashion to stop putting profit over people and the planet.” says XR Fashion Action activist Hermione Berendt.

The protest was organised by XR Fashion Action, a decentralised group of activists seeking to highlight the negative environmental and social impact of the fashion industry and to push for collaborative change.

3. Fashion will produce around twice the volume of emissions required to align with the Paris Agreement: https://globalfashionagenda.com/wp-content/uploads/2020/08/Press-release-Fashion-on-Climate_GFA_McK_Embargo_270820_FINAL.pdf