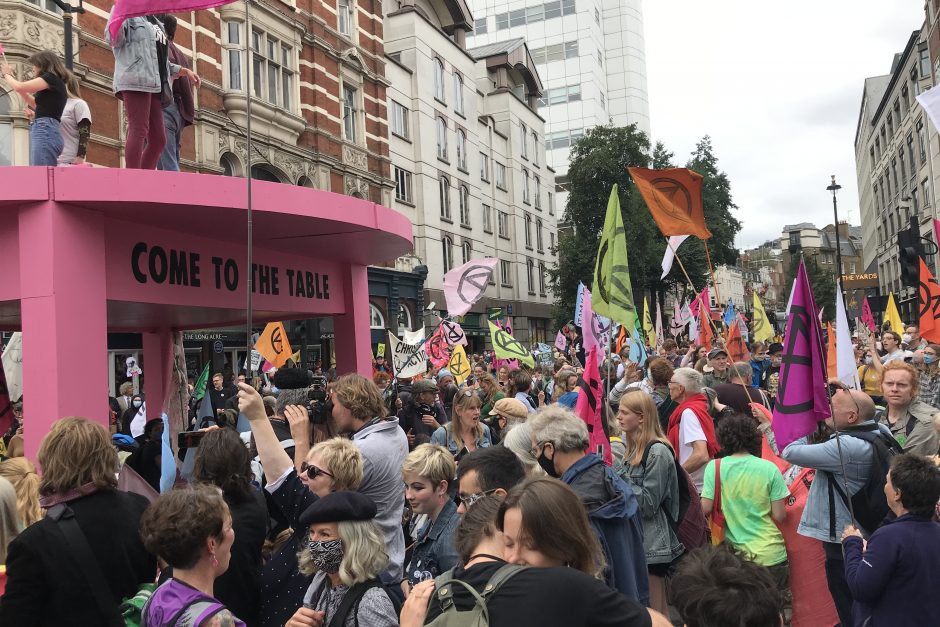 Impossible – Feels Like The April Rebellion All Over Again

Police arrests have begun in Covent Garden after a day which felt distinctly like old rebellion times. At midday, crowds of rebels following three different samba bands, met at a junction where an outsized iconic pink table blocked an intersection, in Covent Garden near Seven Dials. The words: Come to the Table were written on its side.

Speeches followed from luminaries such as comedian Mark Thomas and Costa-prize winning novelist Monique Roffey as well as from rebels from different parts of the movement. And people danced in the sunshine.

But this is August 2021 not Spring 2019. The object is a pink table rather than a boat. And we are two years closer to the edge of runaway climate change. And these days Extinction Rebellion is not only still trying to raise the alarm about the climate and ecological emergency, but also to combat Priti Patel’s Police Crime Sentencing and Courts bill aimed directly at this kind of protest.

Comedian Mark Thomas talked about the PCSC bill and the fact protestors can receive sentences for up to ten years for being ‘annoying’. And laws which prioritise the safety of statues over women. He also lampooned Boris Johnson for not putting COVID restrictions in place before both doggers in Chesham and ISIS.

Author of The Mermaid of the Black Conch, Monique Roffey, focused on the theme of next week and the City of London and urged people to boycott banks and put pressure on shareholders to change behaviours.

But perhaps most memorable speech came from a twelve-year-old girl calling herself Wren talk of the rights of the nonhuman: ‘The plants have a right to live here and for us not to ruin everything.’ But most heart-breaking, she also talked about her worries for her bothers who are aged two and five.

As this is published we don’t know if rebels will hold the site over night.