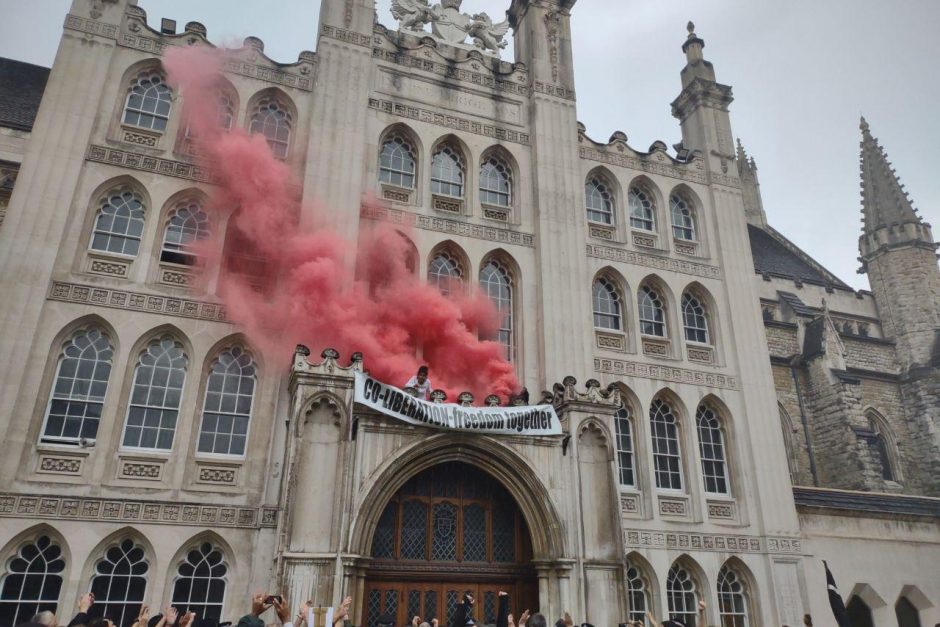 At 5:30pm on Sunday August 22, ahead of the Impossible Rebellion as our Opening Ceremony for two weeks of mass participation civil disobedience planned by Extinction Rebellion – 3 people scaled the portico of the Guildhall and dropped a banner that read ‘Co-Liberation / Freedom Together’.

The Impossible Rebellion begins on August 23, the 230th anniversary of the start of the beginning of the Haitian Revolution and the International Day for the Remembrance of the Slave Trade and its Abolition. The Rebellion will demand that the government implement it’s immediate demand – for the UK Government to immediately stop all new fossil fuel investments.

The City of London was the financial force behind Britain’s role in transatlantic trade of Afrikan people as slaves, insuring vessels and arranging cargoes. [1] The City also played a pivotal role in British colonialism, beginning in Ireland in the early 1600s where it still owns land today, and spreading across the globe. [2]

Today, the City of London, via the investments of the companies that it hosts, is responsible for 15% of global CO2 emissions. [3] If it were a country it would be the 9th biggest carbon emitter on the planet. [4] Not one of the top 10 funders in the City has made a serious plan to exit fossil fuels, despite having pledged to reach net zero by 2050.

According to a study published in Nature Geoscience in March, a temperature rise of above 1.5C could push tropical regions of the world beyond “the limit of human adaptation.” [5] The FTSE 100 is currently on track for 3.9 degrees of global heating. [6] According to Professor Johan Rockstrom, joint director of the Potsdam Institute for Climate Impact Research, a temperature rise of 4 degrees above pre-industrial levels could result in the deaths of millions of people as the world would only be able to sustain a fraction of the current population. [7]

Skeena Rathor, Extinction Rebellion Co-leader and a founding member, said: “The City of London has long led and profited from enslavement and colonisation. Today it continues on this violent path as it enables the flow of money into the very industries whose actions will destabalise food sources, displace people and make large swathes of the world uninhabitable.

“We are here in the City of London today, on the 230th anniversary of the beginning of the Haitian Revolution, the only successful revolution by enslaved black people in modern history. On their shoulders we stand, with a peaceful nonviolent ceremonial disobedience in the heart of this violent system.”

“It is time for humanity to begin healing the wounds of division, domination and war which scar our history and to come together in co-liberation, to grieve what we have lost and preserve what is left.”

Esther Stanford-Xosei, Coordinator General of the Stop The Maangamizi Campaign and co-founder of Extinction Rebellion Internationalist Solidarity Network, said: “The time the clock of our history is telling is one in which we have to wake up to the fact that the continuing Maangamizi has taken us to the point where neocolonialism, particularly in the Majority World is now adding to its crimes of genocide and ecocide, the worsening horrors of eco-fascism, and this is most exemplified by the situation in Haiti today.

“Drawing inspiration from the resilience of the Haitian Revolutionaries, we are seizing the time to stop the harm throughout the World and effect reparatory justice change with our unifying Peoples’ Power, manifesting in glocally interconnected Global Citizens Assemblies in order for all Humanity to pull together in such actions of ‘Impossible Rebellion’ to achieve Planet Repairs. This is what we mean by our clarion: Stop The Maangamizi- Build Maatubuntuman in Ubuntudunia.”