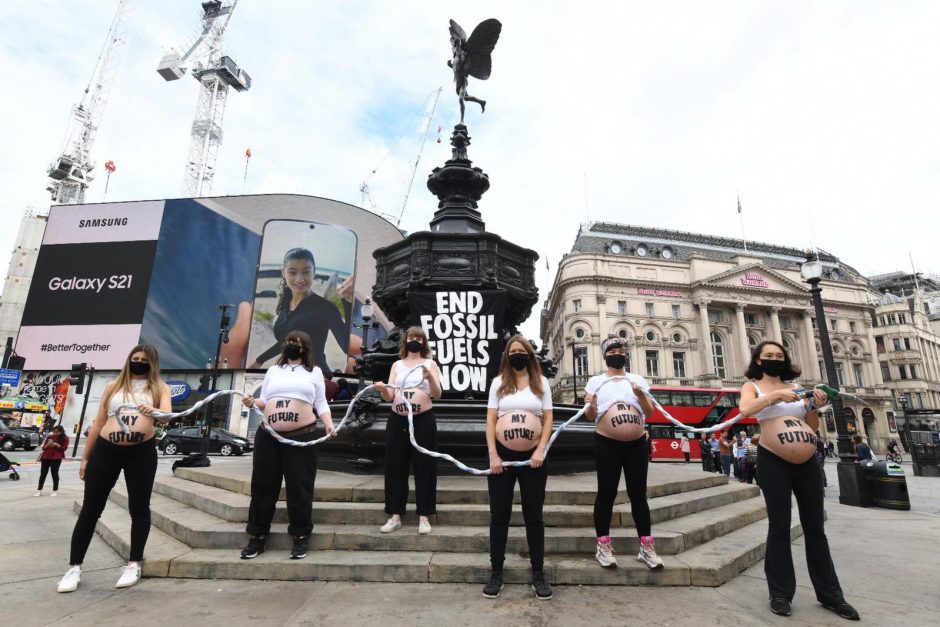 On the morning of July 31 at Piccadilly Circus, six women stood with their six unborn children in their pregnant bare bellies, demanding an end to fossil fuels. The words ‘My Future’ were printed on their bumps and they held a giant ‘umbilical cord’, connected to a petrol pump and nozzle. Desperate for a cleaner world for their unborn children, they were drawing attention to Extinction Rebellion’s demand for an immediate ban on all new fossil fuel projects.

Tiger Lily Raphael, who is 9 months pregnant, said: “I am crippled with concern for the state of my unborn child’s world. It feels like my child is being failed before their life has even begun because of the lack of meaningful Government action on the climate and ecological crisis.

“The climate is changing because we continue to burn fossil fuels, but the UK Government currently has no policies in place to end them.

“I am accountable as a parent and a citizen and so I am here demanding that the Government use their power to STOP THE HARM by putting an immediate ban on all new fossil fuel projects.

“Public money should be spent on protecting us and our children. Please don’t let our children suffer the consequences of Boris’ lack of action.”

The COP26 homepage states: “Temperatures are soaring. Storms are raging. And crops are failing. If we do not take this chance, every single one of us will be affected” [1] This reality is known to the UK government, which holds the presidency of the COP26 Global Climate Summit in November, but it has failed to act with the urgency dictated by the crisis.

Extreme weather is becoming the norm and the UK is not prepared. [2] Babies and children are particularly vulnerable, [3] The World Health Organization estimates that over 80% of the illnesses, injuries, and deaths occurring due to climate change are in children, particularly those living in poor and under-served areas.[4] Climate change threatens children’s futures around the world. [5]

It is the first duty of Government to protect its citizens, yet it has failed to ratify the Global Treaty on the Prohibition of Nuclear Weapons [6] and is spending £31billion on replacing Trident nuclear missiles and £190Billion on defence by 2025 [7]. A further £100Billion is being spent on the controversial HS2 project. [8]

The carbon budget busting Cumbrian coal mine has not been cancelled despite new recommendations from the Committee on Climate Change [9] and the UK Government is not even on track to meet their own target of carbon net zero by 2050; a date that will be too late to save most of humanity and the natural world from destruction. [10]

About COP26
The UK will host the 26th UN Climate Change Conference of the Parties (COP26) in Glasgow on 1 – 12 November 2021. COP refers to the decision-making body of the United Nations Framework Convention on Climate Change (UNFCCC).
At the summit, delegates including heads of state, climate experts and negotiators will come together to agree coordinated action to tackle climate change.
https://ukcop26.org/

[2] Extreme weather will be the norm and UK is not prepared, scientists warn
https://www.theguardian.com/world/2021/jul/29/extreme-weather-will-be-the-norm-and-uk-is-not-prepared-report-warns

[3] Protecting women’s and children’s health from a changing climate
https://www.who.int/pmnch/knowledge/publications/summaries/ks32.pdf

[4] Children are the face of climate change: Knowing and responding to health risks of climate change Kristie L. Ebi
https://www.unicef-irc.org/article/931-children-are-the-face-of-climate-change-knowing-and-responding-to-health-risks-of.html

[7] Defence review 2021: how much the UK spends on nuclear weapons
https://www.scotsman.com/news/defence/defence-review-2021-how-much-the-uk-spends-on-nuclear-weapons-and-why-government-is-lifting-cap-on-trident-3167726