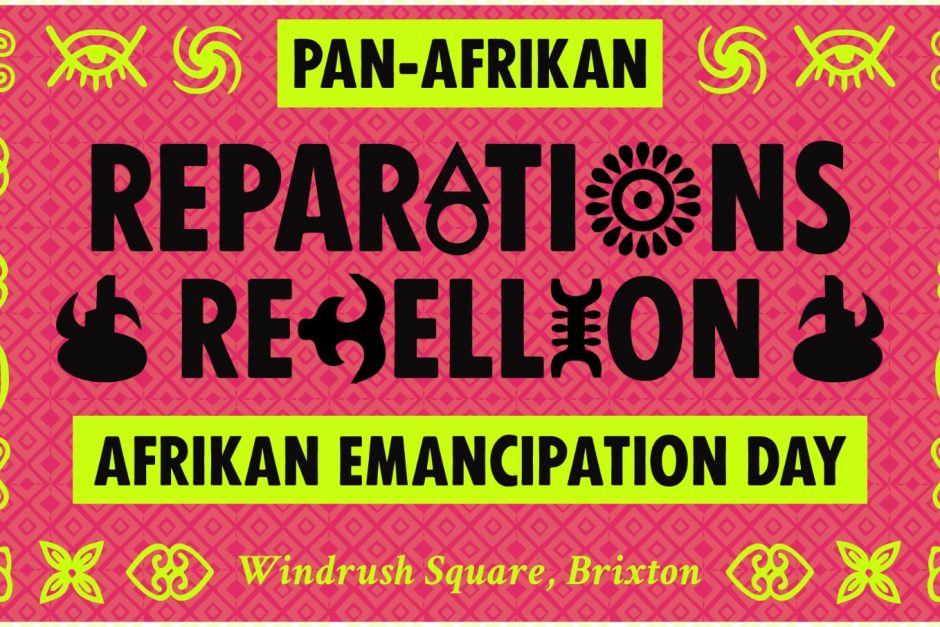 From 10am on Sunday August 1 Extinction Rebellion will join in support of the Afrikan Emancipation Day Reparations Rebellion Groundings to block Brixton Road from Max Roach Park to Windrush Square. The coalition of groups, including the Stop the Maangamizi: We Charge Genocide/Ecocide Campaign, Afrikan Emancipation Day Reparations March Committee, Extinction Rebellion Internationalist Solidarity Network (XRISN), the youth led Global Majority Vs UK Gov Campaign, as well as other student and youth movements, will occupy the area for the day demanding holistic reparations, including planet repairs.

The theme of the Pan-Afrikan Reparations Rebellion Groundings this year is ‘Defeating the Maangamizi of Neocolonialism with Afrikan Autonomy: All Roads Must Lead to Our Sacred Cause of Reparations.’ Maangamizi is a Kiswahili term for ‘Afrikan Hellacaust’ meaning the crimes of genocide and ecocide in the continuum of chattel, colonial and neocolonial forms of enslavement, popularised in the song ‘Maangamizi’ by British musician, journalist, author, activist and poet Akala. [1] It takes place on Afrikan Emancipation Day, commemorated in the Caribbean and some parts of Africa marking the passing of the 1833 Abolition of Slavery Act, which came into force on August 1 1834.

This is the 8th year that reparations focused protests have been held on Afrikan Emancipation Day and while previously they have taken the form of a march, this year and last the coalition of groups decided to occupy central Brixton.

Spokesperson for XRISN, the Stop the Maangamizi Campaign and the Afrikan Emancipation Day Reparations March Committee, Esther Stanford-Xosei, said: “Like previous generations of our indomitable freedom-fighting forebears who were compelled to rebel against chattel enslavement and colonialism in order to assert their rights to life, we too have to rebel against the Maangamizi of neocolonialism, because neocolonialism is killing us and our planet and denying us the right to breathe.

“During the 19th and 20th centuries, colonial powers such as the UK, Portugal, France, Germany and Belgium violently extended their powers to Afrika, Abya Yala (the so-called Americas) and other parts of the Global South through the establishment of colonies – where millions of people were subjugated, dispossessed of their lands and resources and their cultures were demonised. Despite the so-called independence of Afrikan and Caribbean nation states, these atrocities are still happening. Lands are being grabbed, resources continue to be extracted, which is worsening the climate and ecological crises and the human and peoples’ rights of communities are still being violated by these neocolonial governments who collaborate with governments hostile to their own peoples’ interests, as well as multinational corporations, to further dispossess their populations.

“As if this was not enough, the British establishment is passing more horrendous legislation to legitimise it’s pushing of regimes in the Global South towards eco-fascist state terrorism in collaboration with Empire. 2.0 with instruments such as the Overseas Operations (Service Personnel and Veterans) Act 2021.

“When we as Afrikan reparationists raise the clarion call to “Stop the Maangamizi and build Maatubuntuman in Ubuntudunia”, we are calling for the shutting down of Maangamizi crime scenes, the reparatory justice redistribution of wealth and all ill-gotten gains of the Maangamizi for Afrikan peoples’ alternative path of progression that is based on eradicating Afriphobia and other forms of racism, rebuilding our communities and nation-formations in harmony with each as members of the human family and also Mother Earth.” [2] [3]

The event comes just a few weeks before Extinction Rebellion takes to the streets of London to demand action on the climate and ecological crisis. The rebellion begins on August 23, the 230th anniversary of the start of the Haitian Revolution in 1791 which has been declared the United Nations International Day for the Remembrance of the Slave Trade & Its Abolition.

Esther Stanford-Xosei, added: “The imposition of the Maangamizi of neocolonialism upon Haiti; denying its opportunity to realise true independence and Afrikan sovereignty continues the crimes of genocide and ecocide not only there, but also against Afrikan and all other colonially oppressed peoples throughout the world. Hence the necessity to see the Extinction Rebellion launch on this day as also one of solidarity with rebels in Haiti and their Afrikan kith and kin continuing their Reparations Rebellion throughout the world to highlight the common cause of putting an immediate full stop, amongst other things, to the Global North financing of the ecocide of fossil fuel raping of Mother Earth.”

The Reparations Rebellion adopts a broad definition of reparations beyond monetary compensation, towards a focus on repair and stopping the harm. To this end, the roadblock will reduce air pollution in Brixton providing a space, such as the Global Citizens Garden on Brixton Road, where people from all walks of life come together to prefigure what Planet Repairs in our communities mean in reparatory justice terms, with a view to practically envisioning the future world devoid of ecocide which we are seeking. Studies have shown that those from poor and BAME communities in the UK suffer the worst effects of deadly air pollution. [4] This transformation of Brixton into a Global Citizens Garden will include edutainment, music, art and peoples’ assemblies celebrating the 5 continents of Afrika, Abya Yala (South America), Asia, Europe and Oceania.

A special feature of the Reparations Rebellion Groundings will be a Provisional Peoples Tribunal in which there will be a cross-community simulated trial of Home Secretary Priti Patel and the UK Government for the genocide and ecocide crimes of neocolonialism. This is part of law-related education and training for people in various communities who would like to testify at the future All-Party Parliamentary Commission of Inquiry for Truth & Reparatory Justice as well as contribute to the development of what Afrikan reparationists call the Ubuntukgotla Peoples International Tribunal for Global Justice.

The event aims to promote the necessity of stopping the genocide and ecocide of African people and their environments. Speakers will highlight the relevance of reparatory justice and environmental justice to the advancement of Planet Repairs solutions to the climate and ecological crises, disproportionately impacting peoples in Afrika and other parts of the Global South and their diaspora communities in the Global North. [5]

[2] Maatubuntuman is the name and concept being popularised for the envisaged future Pan-Afrikan Union of Communities located on the continent known as Africa today. Coined from the conjunction of ‘Maat’ (the holistic justice concept from Kemet, Ancient Egypt), with ‘Ubuntu’ (the Bantu concept of the Communion of Humanity from Southern Afrika) and ‘Oman’ (the Akan concept of egalitarian Polity from West Afrika), Maatubuntuman is meant to promote the concept of a global Afrikan polity (‘Oman’), which is an organic embodiment of ‘Maat’, and therefore practices ‘Ubuntu’ in relation to her own citizens and the entirety of humanity, Mother Earth and the universe.

[3] Ubuntudunia (Ubuntu+dunia) is a combined Nguni & Kiswahili word which means a Multipolar World of Global Justice.

[4] Associations between air pollution and socioeconomic characteristics, ethnicity and age profile of neighbourhoods in England and the Netherlands: https://www.sciencedirect.com/science/article/abs/pii/S0269749114005144?via%3Dihub

[5] Planet Repairs refers to the need to proceed from a standpoint of pluriversality that highlights the nexus of reparatory, environmental and cognitive justice in articulating the need to repair holistically our relationship with, and inseparability from, the Earth, environment and the pluriverse giving due recognition to indigenous knowledges in contrast with western-centric Enlightenment ideals that separated humanity from nature and thereby justified exploitation for capital accumulation. Esther Stanford-Xosei & Nicola Frith REPAIRS (2021)