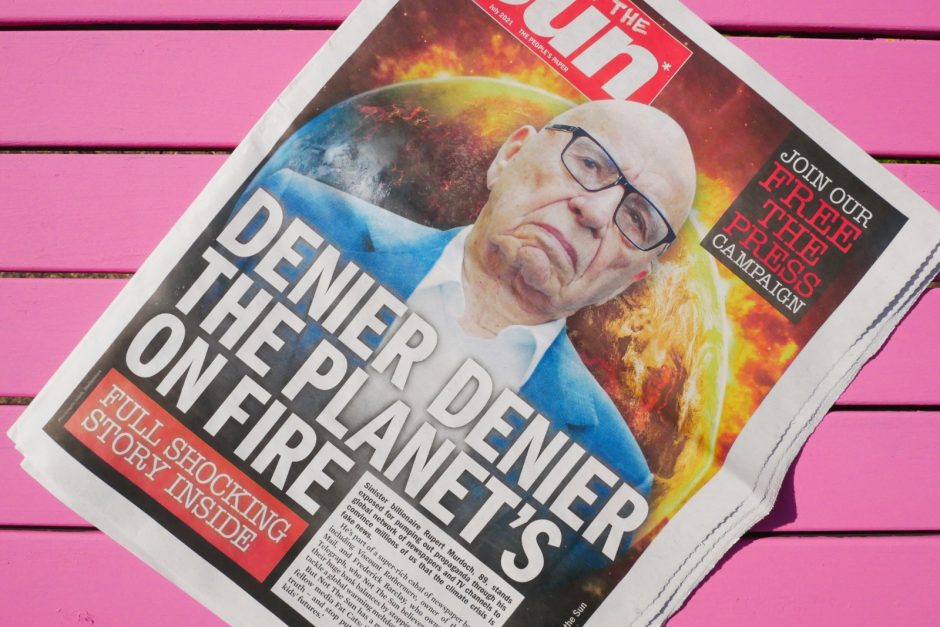 Not The Sun – Extinction Rebellion’s love letter to the tabloids

“Our tabloid is an honest attempt to show what our most popular newspapers could be doing every day: telling the scary truth and how to deal with it – but still entertaining us and making us smile.”

Bold, lairy, laugh-out-loud and read by millions. This country’s tabloid and mainstream newspapers could be a true voice of the people – inspiring us to face up to the accelerating climate crisis with Brit grit, and encouraging us to build a safe, optimistic future together.

Instead, papers like The Sun, Daily Mail and Daily Telegraph and their talented journalists are muzzled and held hostage by three billionaire owners who use them to sell us a deadly daily illusion that Business As Usual is still possible – because that’s what keeps their profits flowing.

So, we dared to imagine a world in which ultra-rich media barons Rupert Murdoch, Viscount Rothermere and Frederick Barclay* weren’t calling the shots on our most popular papers.

We’ve created a national tabloid called Not The Sun to prove that you can be funny and punny, bold and punchy, while telling the truth about the worst crisis that humanity has ever faced, and, as importantly, offering hope for a better tomorrow for everyone.

Not The Sun punches up at the politicians and powerbrokers of every party who are doing too little, too late to tackle the climate emergency, rather than punching down at immigrants, the poor, marginalised and powerless as scapegoats for our mounting environmental, social and economic problems.

The national tabloid is the next stage of Extinction Rebellion’s Free The Press campaign, launched last September with a blockade of a major printing plants in Broxbourne, Hertfordshire and Knowsley, Merseyside that stopped the distribution of 3.5 million copies of The Sun, the Daily Mail, and the Daily Telegraph, and made headlines around the world.

That action – and a weekend of mass protests in London in June – focused the public’s attention on the ‘rich crooks’ who own and run our media.

“Not The Sun is our love letter to a form of brilliant popular journalism that could help save us all – if only it wasn’t held hostage by three billionaires who want to keep lining their pockets while the planet burns,” says Steve Tooze, an ex-journalist who spent 20 years working for the UK’s national tabloids and helped create the Extinction Rebellion tabloid.

“Our tabloid is an honest attempt to show what our most popular newspapers could be doing every day: telling the scary truth and how to deal with it – but still entertaining us and making us smile.”

A tiny team of unpaid volunteers created the 24-page Not The Sun between their day jobs and childcare commitments. It was distributed for free nationwide in 23 towns and cities, including London, Manchester, Leeds and Leicester, by teams of unpaid Extinction Rebellion volunteers during the morning rush hour on Friday July 23.

One of the most high-profile distributions happened in Liverpool – a city that has boycotted The Sun for 30 years for a disgusting fake news story about drunken Liverpool FC fans robbing bodies at Hillsborough.

Creating Not The Sun offered an unsettling glimpse into the iron grip of fear that Murdoch exerts over an entire industry. “Two major printers and their lawyers refused to print our tabloid after seeing our hard-hitting front-page expose of Murdoch’s environmental crimes,” says Tooze.

“They were clearly terrified of the media baron, and worried that he would seek to damage their business in revenge for printing stories critical of him and his global empire.”

Not The Sun and Extinction Rebellion says their tabloid is a clarion call to UK journalists to rise up and refuse to write any more climate lies.

“If a little group of volunteers and activists can create and distribute a high-quality, hard-hitting national tabloid that tells the truth, imagine what the power, resource and talents of the big newspapers could do,” says Tooze.

“To the journalists on these newspapers we say – we need you desperately. Free yourself from your crooked owners and start telling us the truth about the climate crisis.”

“To the public, we say – tell the editors of your daily newspaper that you are sick of their climate lies and that you want to start hearing the truth, every day, about the crisis. How can we act like this is an emergency until the papers we read talk about it like it one?

“To Murdoch, Rothermere and Barclay, we say – this is just the beginning. We need you to tell the truth because our survival and the survival of our children depends upon it.”

What Not The Sun says (summary of key features in our tabloid):

Splash & page: Denier, Denier, The Planet’s on fire & Lords of the Lies
Our expose of the way in which Murdoch, Rothermere and Barclay use their captive newspapers to play down the terrifying climate revelations of the world’s top scientists – and leave us all sleep-walking toward a global warming meltdown.

Page 3: Not The Sun doesn’t shy away from scantily-clad lovelies. But it does reject the idea of turning young women into mass market sex objects. So, meet our Page 3 bombshells Boris & Keir – and learn how they plan to make us love them.

Line of Snooty – the exclusive inside story of the print blockade activists who used their court case to uncover Home Secretary Priti Patel’s attempt to bully top cops on behalf of her big buddy Rupert.

News that punches up, not down – revealing the betrayal of our NHS heroes, why the biggest holiday crisis is yet to come unless our leaders act fast, how Boris’ viral online lies are being ignored by the BBC, and the tragedy of the travellers.

Motor-free Motoring – a motoring column that looks at the best in family-friendly bikes, rather than gushing over gas-guzzlers that are wrecking the health and happiness of our towns and cities.

Get Broken Bottled – former hack Mic Wright’s biting and witty column takes a look at a media system that is letting us all down.

Digging for victory! – a gardening section that envisages Britain’s much-loved back gardens as wildlife havens – and secret weapons against the climate crisis.

Sunny’s Solutions – the problem page that looks beyond love dilemmas to offer advice on the things, big and small, that really matter in our lives.

A sinking feeling in Sport – a sports section that looks behind the transfer window gossip to reveal how the climate crisis will send Chelsea down for good – beneath the rising waves.

*CORRECTION: Due to an unfortunate editing error in the issue of Not the Sun, an incorrect name and picture were used on page 4 on the story headlined Lord of the Lies. We mistakenly stated that the owner of the Telegraph and Sunday Telegraph was Patrick Barclay and used a photograph of the sports journalist of the same name. We would like to make it clear that Frederick Barclay is in fact the owner of the Telegraph and Sunday Telegraph. We have corrected the error in our public print distribution and online editions and apologised to Patrick Barclay for this mistake. We’d like to apologise to those who received the embargoed copy of the paper for any distress before the editing error was corrected. We’d like to take this opportunity to thank Patrick for his good-humoured acceptance of our apology.