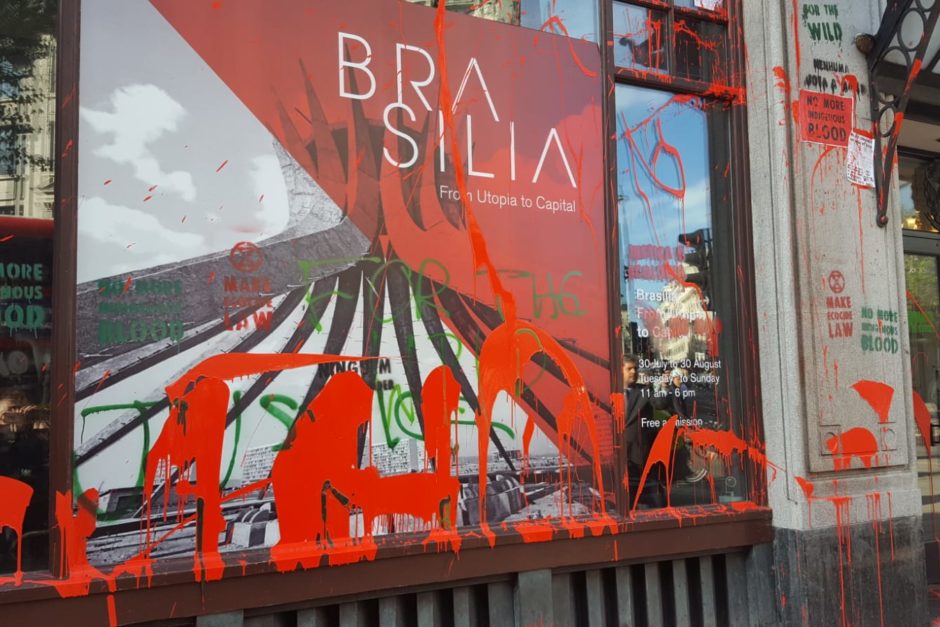 The Crown Court trial for five members of Extinction Rebellion charged with criminal damage during a protest at the Brazilian embassy begins today (Monday 12 July 2021).

The trial, at Southwark Crown Court, is only the third Extinction Rebellion trial to be decided by a jury. It follows the acquittal by a jury in April of six XR activists, despite all but one having no defence in law.

The charges relate to an action at the Brazilian Embassy in London in August 2019 during which the group, known as the Snowflakes, blockaded the main entrance. They spray painted messages onto the building and doused it in red paint to symbolise the blood of the Brazilian people, in particular indigenous people, killed under Bolsonaro’s regime.

It was one of a number of simultaneous demonstrations that took place around the world that day to highlight the destruction of the Amazon rainforest and the abuse of indigenous peoples’ rights.

The defendants include: Sian Vaughan, 56, a retired primary school teacher from Pembrokeshire, Wales and Richard Barnard, 47, a former charity worker from Maidstone.

Raphael Colman, also known in Extinction Rebellion as Iggy Fox, was the sixth member of the group charged for the action. Iggy died tragically aged 25 of an undiagnosed heart condition in February 2020.

The trial will be heard before Judge Gregory Perrins and is scheduled to last between five and seven days.