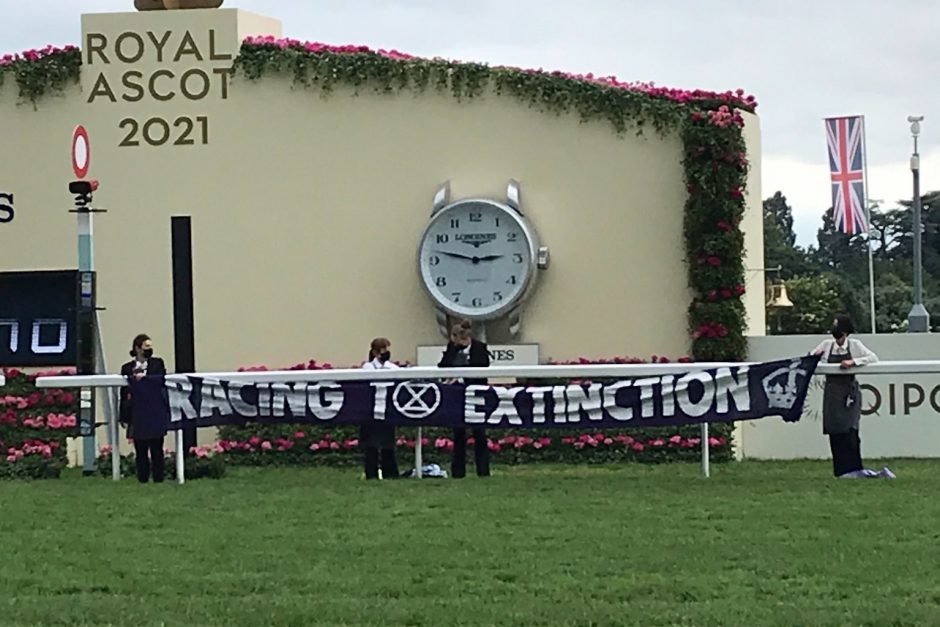 On Saturday June 19th, the final day of Royal Ascot, four women from Extinction Rebellion entered the racecourse with a banner reading ‘Racing to extinction.’ They glued themselves to their banner and chained themselves to the fence before the Queen, requesting that she use her influence to tackle the climate and ecological emergency.

The action pays tribute to the suffragette, Emily Davison, who died attempting to attach a flag to the King’s horse during the Epsom Derby in 1913. Like Emily, the protesters say they want to urge those with connections and influence to drive positive change.

One of the protesters, Sam Smithson, 38, said: “I’m really sorry to be disrupting this event, but unfortunately, like suffragette Emily Davison, we have been left with no other choice, as we are running out of time in the race to tackle the climate and ecological emergency. We can’t negotiate with each other or nature for more time by carbon offsetting, whilst also promoting infinite growth on a finite planet and chopping down our ancient woodlands.”

They staged the action while the Queen’s horses Tactical and Light Refrain were stationary at the start line ready with the others to race in the Jersey Stakes. By crossing the track 15 minutes before the race they ensured sufficient time for management to warn the jockeys and prevent any injury from occurring.

Protesters wished to speak women-to-women, presenting three respectful requests to the Queen that they had previously sent to her in an open letter. [1]

They request she use her influence to make an emergency speech to parliament and her citizens, urging them to tell the truth and act now on the climate and ecological emergency. In her face-to-face talks with the prime minister, they ask that she encourage him to respond proportionately to the environment and climate emergency declared by the government in May 2019.

Finally, they request that she urge parliament to reassess the Police, Crime, Sentencing and Courts Bill (2021), which will restrict our democratic right to protest government inaction, and the inadequate Environment Bill. This second bill was delayed again and will, as it currently stands, put the UK’s environment at risk of further destruction and degradation – something we cannot afford at this perilous point in time.

Another of the protesters, Sally Davidson, 33, commented: “The Queen has a unique position in the Commonwealth and direct access to the government and Prime Minister. She can encourage them to take action on the climate and ecological emergency, rather than just pay lip service to it. Two years ago, Parliament declared a climate emergency and in 2015 they signed the Paris Agreement. Despite this, during the pandemic alone, they have invested more in fossil fuels than previous years.”

The protest came in the same week that the Committee on Climate Change, the government’s own advisors on climate, announced that the government is failing to protect people from the risks of the climate crisis and that they were frustrated by the “absolutely illogical” lack of sufficient action on adaptation, particularly as acting is up to 10 times more cost-effective than not doing so. [2] [3]

The action comes two months before the group’s next Rebellion starting August 23rd.

[1] Sign An Open Letter to The Queen to Act on the CEE:
https://www.change.org/p/the-queen-sign-an-open-letter-to-the-queen-to-act-on-the-cee?utm_content=cl_sharecopy_29457303_en-GB%3A4&recruiter=1211846468&utm_source=share_petition&utm_medium=copylink&utm_campaign=share_petition