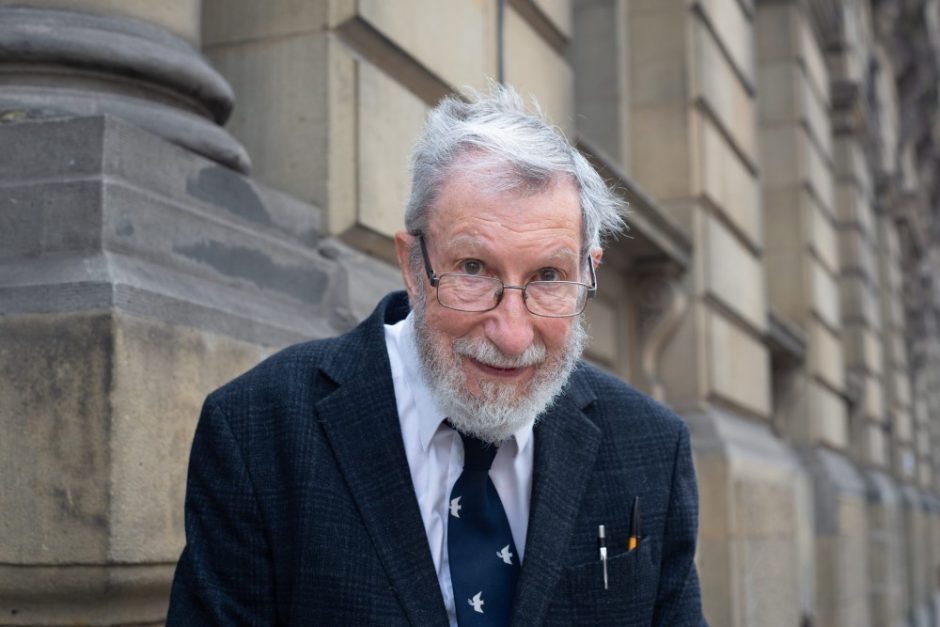 John Lynes, who also worked as a university lecturer and after retirement as a human rights observer in Palestine, has 12 foster children, 31 grandchildren, 11 great-grandchildren and three great-great-grandchildren. He has been arrested numerous times and been to prison for his previous peace activism, but his first arrest for XR was in Dover in September 2019 for an action blocking a roundabout with his local group. He was tried at Folkestone Magistrates’ Court on 5th December 2020 and given an 18-month conditional discharge and court costs.

John was arrested again during the 2019 October Rebellion outside the Cabinet Office in Whitehall, but was not charged. He was arrested again during the 2020 September Rebellion under Section 14 of the Public Order Act, while sitting in the road near Parliament Square and tried in June 2021 at City of London Magistrates’ Court. He was found guilty and received a £180 fine and £500 court costs.

“I am pleading not guilty to a charge under the Public Order Act 1986. The material facts of the case are not in dispute.  We all deliberately sat down in the road, having given notice of the time and place, enabling the police to redirect traffic in an orderly manner. I did not take this action lightly.

In terms of the Public Order Act, my plea is of “necessity”. To establish duress of circumstances I need to show that I acted reasonably and proportionately to avert an immediate mortal threat.

I remind you of the circumstances.  In centuries past, radiation from the sun in summer has fallen on arctic snow and permafrost.  Most of this radiant energy has been reflected back through the atmosphere. The rest has been absorbed by the snow or permafrost, raising its temperature and melting some of the ice. In the winter these would receive less solar radiation. The melted ice would refreeze. The seasonal cycle and the global climate would remain stable from year to year, even from century to century.

Today, with global warming, that long term cycle is broken. Some of the ice which melts in the summer no longer refreezes in the winter.  Consequently as the snow and permafrost melts, the sun’s radiation no longer hits just snow.  It hits water or solid ground. It is no longer reflected straight back through the atmosphere. It is absorbed by a darker surface. It heats up that object. The increased temperature in turn melts more ice; revealing more of the darker surfaces, melting more ice, leaving more dark surfaces, in a runaway chain reaction spiralling out of control.  The environment becomes hotter as more ice melts, and more ice melts as the environment gets hotter.

We probably haven’t reached that situation yet. All we know for sure is that we are getting closer and closer to a tipping point beyond which the process will become unstoppable. And once it takes hold we know that the Antarctic ice sheet will reach its own tipping point. Sea levels will rise catastrophically. Poorer people in the Indian Ocean and in Bangladesh are already starting to suffer. Neighbourhoods and countryside we cherish in Kent and Sussex will be lost to future generations.

That will take time. I won’t live to see it. What’s urgent is to act now, because we know that the tipping point can’t be far ahead; we will recognise it only in retrospect. There is no time to lose. I guess the critical instant will be towards the end of a hot summer: probably September. Remember that it was in September that we chose to block the road in Dover. I took that step with a heavy heart. There was no alternative.

For me as an individual, the imminent danger is particularly challenging and I feel a personal responsibility for sharing my own insight for two reasons. Firstly, much of my professional life has been taken up with research on radiation transfer. My first monograph on the subject was published sixty years ago, in 1959, and has formed the basis of much subsequent development worldwide in this field.

My second reason is that, after I retired, I worked as a Human Rights Observer in refugee camps and in remote villages, on the edge of the Negev Desert in Palestine, and in Northern Iraq (Iraqi Kurdistan). There I saw at first hand what it means when the village well runs dry. No water for crops. No water for cattle. No water for children.  Terrible choices: who is to have the last drop? That’s what climate change means. It’s what climate change is going to mean here at home if we allow the day to come when we turn on the tap and water no longer comes out.

I wouldn’t be honest if I didn’t add that my wife and I have fostered twelve children, of whom we adopted six. I now have 31 grandchildren, eleven great-grandchildren and 3 great-great-grandchildren. (Some of our foster children were already teenagers when they came to us).

I tremble for their future, especially knowing that my generation – our generation – has been largely responsible for the climate emergency. For their sake too I need you to understand my hopes and anxieties.

That’s all I have to say. Thank you for listening.”

John tells his story in the Guardian. The BBC reports on his September 2019 arrest. The Mirror covers his October 2020 arrest.