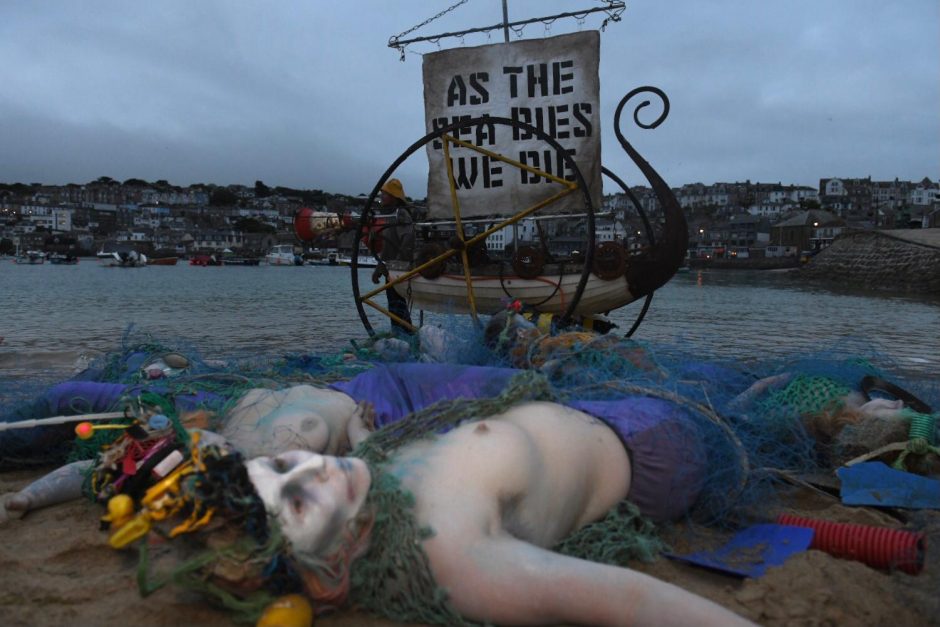 When the sea dies, we die! Ocean Rebellion reports mass stranding of mermaids at the G7 in Cornwall

At dawn on the first day of the G7 summit members of Ocean Rebellion staged a powerful theatrical action. A mass stranding of mermaids, tangled in discarded trawler nets, washed up on a beach near the gathering of the G7 heads of state. A foghorn dinghy sounded a deafening alarm, awakening the delegates at Tregenna Castle hotel from their apathetic dreams – 5 long blasts, the maritime SOS signal, signalling the imminent death of the oceans should the G7 heads of state fail in their high duty to act.

Sophie Miller of Ocean Rebellion said: “Ocean Rebellion demands the G7 puts the ocean at the top of the agenda where it belongs. With stocks already 90% depleted, humanity cannot continue industrial fishing. Beam trawling alone emits more carbon than all of global aviation. These environmentally devastating intensive fishing methods must end NOW.  The seas are too valuable to destroy–destroy them, and we destroy ourselves.  Ocean Rebellion calls for an emergency global ban on bottom trawling, on both biodiversity and climate grounds, by COP26.”

“The fuel tax must be used to furlough the fishing fleet until a full and open investigation of world fish stocks on carbon sequestration and biodiversity grounds is complete, with all fisher folk to receive full pay using the proceeds. The implicit subsidy of highly destructive fishing practices by not taxing fuel makes no sense. Further, blue carbon must be included in national greenhouse gas inventories. Blue carbon is carbon safely stored in marine sediments and in marine biodiversity, provided it is not bottom trawled or overfished and released to over-heat the planet.”

Clive Russel of Ocean Rebellion said: “It’s time for the G7 heads of state to get a grip. Bottom trawling alone represents 13% of UK greenhouse gas emissions.  It’s a no-brainer to ban it globally—industrial scale vandalism like this has no place on a living planet.”

Roc Sandford of Ocean Rebellion said: “It’s time for joined-up policy on the oceans from the G7.  The seas are our lifeline, producing much of the oxygen we breathe and absorbing much of the carbon dioxide, released by burning oil and gas, which is turning the planet into a sauna.  But over-fishing and toxins are killing the marine food web, disrupting oxygen production, and displacing carbon dioxide back into the atmosphere where it accelerates runaway climate, nature and social breakdown.  The G7 heads of state are playing Russian roulette with our children’s lives.  They must make polluters pay what it takes to trigger the repair of the oceans.  No more posturing and waffle—they must do whatever it takes.”

Ocean Rebellion was launched in August 2020, created by a small group, active in Extinction Rebellion (XR) since inception, who are central contributors to XR’s distinctive branding, media-facing narratives, and theories of change. Ocean Rebellion is formally separate from XR in all respects but draws on lessons learned in XR’s development. Ocean Rebellion is a global resource facilitating autonomous grassroots initiatives to protect, enhance and repair the high seas. Ocean Rebellion is an offering of design assets, messaging, protest how-tos and resources which, assuming this is helpful, may be accepted or adapted by marine activist communities worldwide, entirely subject to theirpreferences.

Ocean Rebellion has adopted 10 principles including principled non-violence, the avoidance of blaming & shaming, and respect for all individuals.

Tell the truth: About the destruction of the oceans