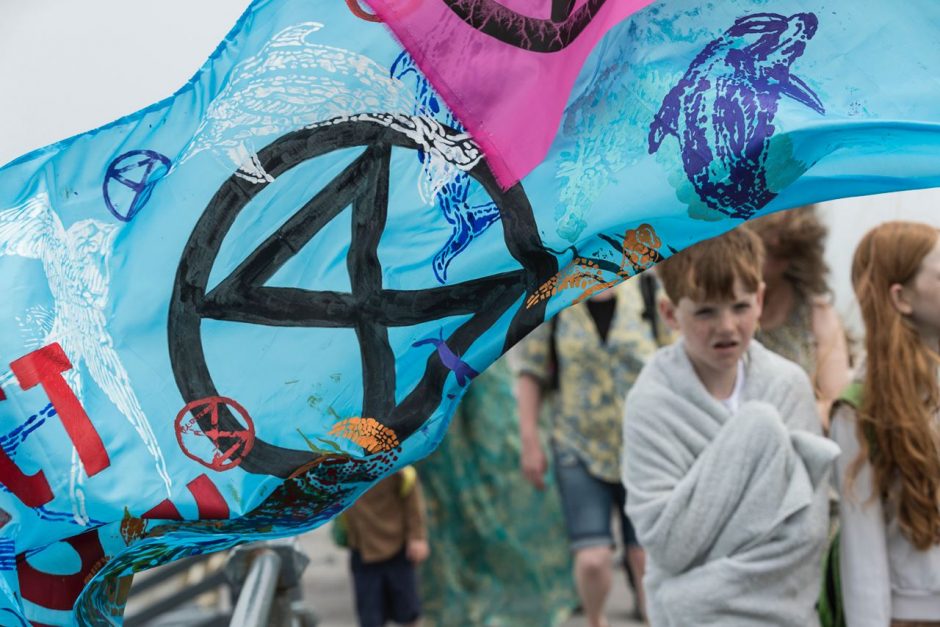 The theme for Day Two of the Extinction Rebellion G7 summit actions is ‘Greenwash’. Its purpose: to expose rich countries and their banking systems which talk about ‘green growth’ while continuing to prop up carbon polluting companies and initiatives.

Extinction Rebellion (XR) activist and one of the  ‘Shell 7’,  Senan Clifford, said: “Greenwashing’ is about fossil fuel companies like Shell  trying to convince people that they are part of the solution; it’s about banks like Barclays promising Net Zero while pumping trillions into new fossil fuel projects; and it’s about the UK government as greenwasher-in-chief claiming climate leadership while simultaneously granting licenses for new oil and gas exploration.

“Shell is a major greenwash culprit. On one hand it announces plans to cut its emissions by half by 2050. Yet,  99% of its business is still in fossil fuels. Under its new timeline, Shell would only achieve carbon neutrality by 2070 – far too late to limit global warming to the 1.5 degrees the UN is now saying will be necessary if we are to avoid catastrophic damage.”

XR spokesperson Nat Squire, an osteopath from Falmouth, added: “G7 is greenwashing on a grand scale: The gap between promises and action has never been greater. A recent analysis by Green Alliance found government policies announced so far would deliver just 26 per cent of the necessary cuts to achieve the target of a 68 per cent reduction in CO2 emissions by 2030.

“As we brace for a tidal wave of greenwash we hope people will also read our Cornwall 2021 Souvenir Programme – News of the G7 World – likely to become a collector’s item!”

“I’m in Falmouth today to help raise awareness and to demand change from the media and financial sectors to tell the public the truth about the climate and ecological crisis.

“Our media have huge influence over the people. These billionaires therefore have a huge amount of power, of which they use to promote a bias in favour of the fossil fuel industry.”

SUMMARY of events on Saturday 12 June:

Football and the Climate Crisis
10am Gyllyngvase beach, along the procession and ending in Kimberley Park at 3.30pm

A focus of the day is a football match hosted by football fans and environmental activists. This will highlight the role of the G7 (representing the oil companies, corporate profits, corruption, global inequality and toxic business-as-usual) in the climate crisis.

They will be taking on the XR footballers (representing the rest of the world demanding action on the Climate and Ecological Emergency).  However, these matches come with a twist: the referee is a banker and the games are rigged to illustrate how corporate greed and finance are a corrupting influence not only in football but, more significantly, in climate policy.

XR Footballers are drawing attention to the fact that a quarter of English football league stadiums are predicted to be temporarily or permanently unplayable by 2050 due to sea level rise and extreme weather events according to mainstream climate warming projections.

With sport from grassroots to professional levels under threat, they use their skill and honest endeavour to battle Goliath. The game is sponsored by Sharklays, the alter ego of Barclays, the worst polluting bank in Europe and sponsor of the premier league.  Will this bank with a vested interest in business as usual be turned? Like the Superleague collapse, will the people – and therefore the future of our world – win?

Mike Bastow from XR Wales, one of the match organisers, says:

“This landmark football action draws attention to the relationship between our national sport and what scientists regard as the greatest threat humanity will ever face.

Being part of the football community and caring about these bigger issues are not mutually exclusive; there is space for these important conversations in the game.

“And when people unite against the rich and the powerful, as they did over the Superleague debacle, they can win.

“Supporters will witness something happening that levels the playing field; will it be one that saves the planet or are we destined for ever increasing temperatures, extreme weather and the inevitable catastrophic global consequences?”

During the day Falmouth will be hosting an alternative summit. The Big Heads Street Theatre performers will don a set of large, portrait masks of each G7 world leader. They will be used to present several satirical images illustrating the key themes that Extinction Rebellion is highlighting over the weekend – the lack of urgency and the failure to deliver on promises already made. Striking visual images include ‘kicking the can down the road’, painting coal green, retractable promises and a full immersion in the sea.

“As the Paris agreement sinks, we see governments are nowhere close to the level of ambition needed to limit climate change to 1.5 degrees and meet the goals of that agreement.

“Government financing and subsidies for fossil fuel extraction and use needs to stop now. It’s a basic step but despite a 2009 commitment to phase out fossil fuel subsidies by 2025, G7 countries continue to subsidise fossil fuels to the tune of $100bn a year.

“While our leaders make promises to reduce the climate crisis they allow major world banks  to fund climate chaos and ecological collapse.

“We are saying ‘stop kicking the can down the road’. Act now!”

This event will highlight the eviscerating role of G7 leaders and their corporate and media supporters in continuing to fund climate chaos.

Tim Snell from Saltash, south east Cornwall, is the ‘Restaurant’ creator. He says:

“A cloud of CO2 hovers over them, as they are waited on by the head waiter representing  ‘G7’ and two other waiters ‘Bankers’ and ‘Media’.

“Bankers offer money; consumers are bought off; and there are promises of ‘building back better’. All the while the media waiter’s role is to spread greenwash instead of truth.

“We are depicting the interaction between powerful interests who give the impression they are trying to stop climate change. In reality this is all greenwash. G7 leaders must stop funding climate chaos.”

Activists wearing hazmat suits will stage a ‘crime scene investigation’ at Falmouth’s Custom House Quay. The creative action will feature an ‘oil derrick’ and fake oil spill surrounded by placards and climate crime scene tape. It is designed to highlight the links between  “Big Oil”, “Big Money”, politics and the climate and ecological catastrophe that is unfolding around us.

“Despite all their promises to ‘build back better’, G7 nations are continuing to fund oil drilling proposals and projects, when the world doesn’t need any more oil. We can’t afford to burn what we already have. Oil and gas companies need to cut production, banks need to stop lending on fossil fuel projects and G7 governments need to stop funding climate catastrophe.”

A recent report found that, despite pledges to “build back better”,  G7 nations have been pumping more money into fossil fuels than clean energy since the start of the pandemic. Coal, oil and gas received US$189 billion in support, compared to $147 billion for clean forms of energy, between January 2020 and March 2021.  Only 1 in every 10 dollars committed to the Covid-19 response benefited the ‘cleanest’ energies measures, like renewables or energy efficiency.

Procession of One Hundred Penitents and Vigil
4.45pm to 6.30pm
Kimberley Park, Church of King Charles and Events Square

Based on the medieval idea of atonement for transgressions against community, the Penitents carry the crimes of the contemporary world throughout their own.

Penitents began appearing two years ago here in Cornwall and have since spread to Holland, Germany and Canada. The “sins” carried around their necks usually show the many causes of climate and ecological breakdown. However, during G7, which is an international gathering, there is only one sin they carry:  “Still Funding Climate Hell”.

Julia Schofield, one of the Penitents, says:

“Grand promises from Governments round the world mean nothing unless they legislate to prevent oil and gas investments by their financial sectors who are merrily getting a return on death in the global South as fast as they can.

“The promises from our own UK Government will continue to look like baseless greenwash until they cease granting licences for oil and gas exploration in the North Sea. Giving the rigs a renewable energy source so they keep going more and more cheaply for the next 30 years is tinkering in the face of devastation.”

Women artists from across the South West of England are running family-friendly events on Hayle beach over the whole G7 weekend.

“Come and walk the mile-and-a-half Earth Walk. See how long it took for the Earth to become life-friendly, and how quickly we are reversing the process! With a series of placards we will be  showing the 4 billion-year history of the Earth.

“We will be hosting the walk and also doing sand-raking, writing, pictures and graphs. We’d like you to join us. Make your own statement – rakes supplied. Your voice matters!”

Quaker and Bristol-based artist Gaie Delap, one of the activists in Dancing with Brollies and Bubbles, says:

“We want this event to be participatory. So join us for dancing and bubbles. Our message to G7 leaders is simple: put the natural world before corporate profit.

“Protect the Planet, Don’t Destroy It.”

COVID MEASURES
All Extinction Rebellion outdoor activities and protests are designed to be inclusive, safe, and family-friendly. Risk assessments are completed and the movement takes every precaution to ensure the protests adhere to COVID-19 guidelines, with designated COVID safety stewards for each action.

EXTINCTION REBELLION: what we’re calling for at G7 + messaging overview