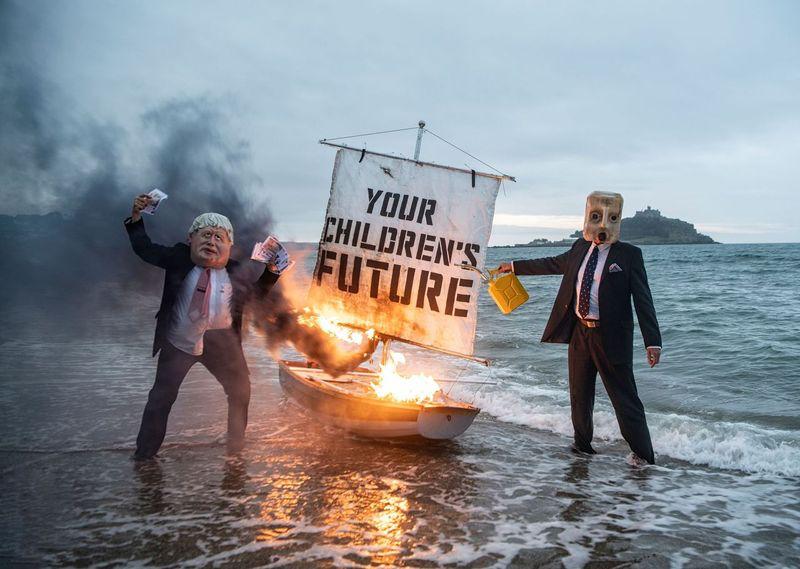 At the crack of dawn this morning, members of Ocean Rebellion staged a theatrical action on the shores of the Cornish coastal resort Marazion with the iconic St Michael’s Mount in the background.

The action was part of an ongoing series of protests leading up to the G7 summit to be held nearby, featuring Boris Johnson sharing intimate quality-time in Cornwall with a Fossil Fuel Buddy. The celebrity pair were seen sitting on deck-chairs as the sun rose and a boat burned in the bay, billowing black smoke, across its sail inscribed ‘Your Children’s Future.’

Protestors say the scene represents the UK government’s total lack of purpose to do anything to combat the catastrophic climate change, ocean acidification and biodiversity loss that will devastate all our futures and leave a dead ocean for future generations. Ocean Rebellion members say the UK government must make the ocean a priority at the G7, and want politicians to distance themselves from the fossil fuel industry. They demand all governments cease subsidies to shipping and begin to tax shipping fuel. They demand the fleet is furloughed until a full and open investigation of world fish stocks is completed, with all fisher folk to receive full pay using a tax on commercial shipping fuel. Ocean Rebellion members say the UK government must make genuine action on climate & nature the priority at the G7. The time for posturing is over.

Sophie Miller of Ocean Rebellion said: “Countless young people have already decided not to have children because the future they will face is simply too hard. With extreme weather already afflicting many people, crop-yields are failing and food shortages are leading to conflict, forced migration and famine. Our disregard of the Ocean has led to a catastrophic decline in fish stocks, with many crucial habitats totally destroyed.”

Rob Higgs added: “This is an emergency. Ocean Rebellion is appealing to the G7 to wake up, join the dots, and take immediate action: Marine habitat destruction is causing elevated levels of atmospheric CO2. For instance, UK bottom trawling dragging heavy weights along the seabed to catch fish] generates emissions equivalent to 13% of UK terrestrial emissions.”

Ocean Rebellion are calling for:

Sophie continued: “G7 heads of state Joe Biden, Boris Johnson, Justin Trudeau, Emanuel Macron, Angela Merkel, Mario Draghi, Suga Yoshihide and Ursula Von der Leyen —the choice is yours: live on in infamy, remembered only for your failure to act while there was still time, or rise to the occasion and act.”

Ocean Rebellion was launched in August 2020, created by a small group, active in Extinction Rebellion (XR) since inception, who are central contributors to XR’s distinctive branding, media-facing narratives, and theories of change. Ocean Rebellion is formally separate from XR in all respects but draws on lessons learned in XR’s development. Ocean Rebellion is a global resource facilitating autonomous grassroots initiatives to protect, enhance and repair the high seas. Ocean Rebellion is an offering of design assets, messaging, protest how-tos and resources which, assuming this is helpful, may be accepted or adapted by marine activist communities worldwide, entirely subject to their

Ocean Rebellion has adopted 10 principles including principled non-violence, the avoidance of blaming & shaming, and respect for all individuals.

Tell the truth: About the destruction of the

Take Control: United Nations to govern our common oceans heritage for the benefit of

humankind, especially indigenous coastal communities, not for the benefit of industry

If the UN fails in this high purpose, then a global citizens’ assembly will convene to